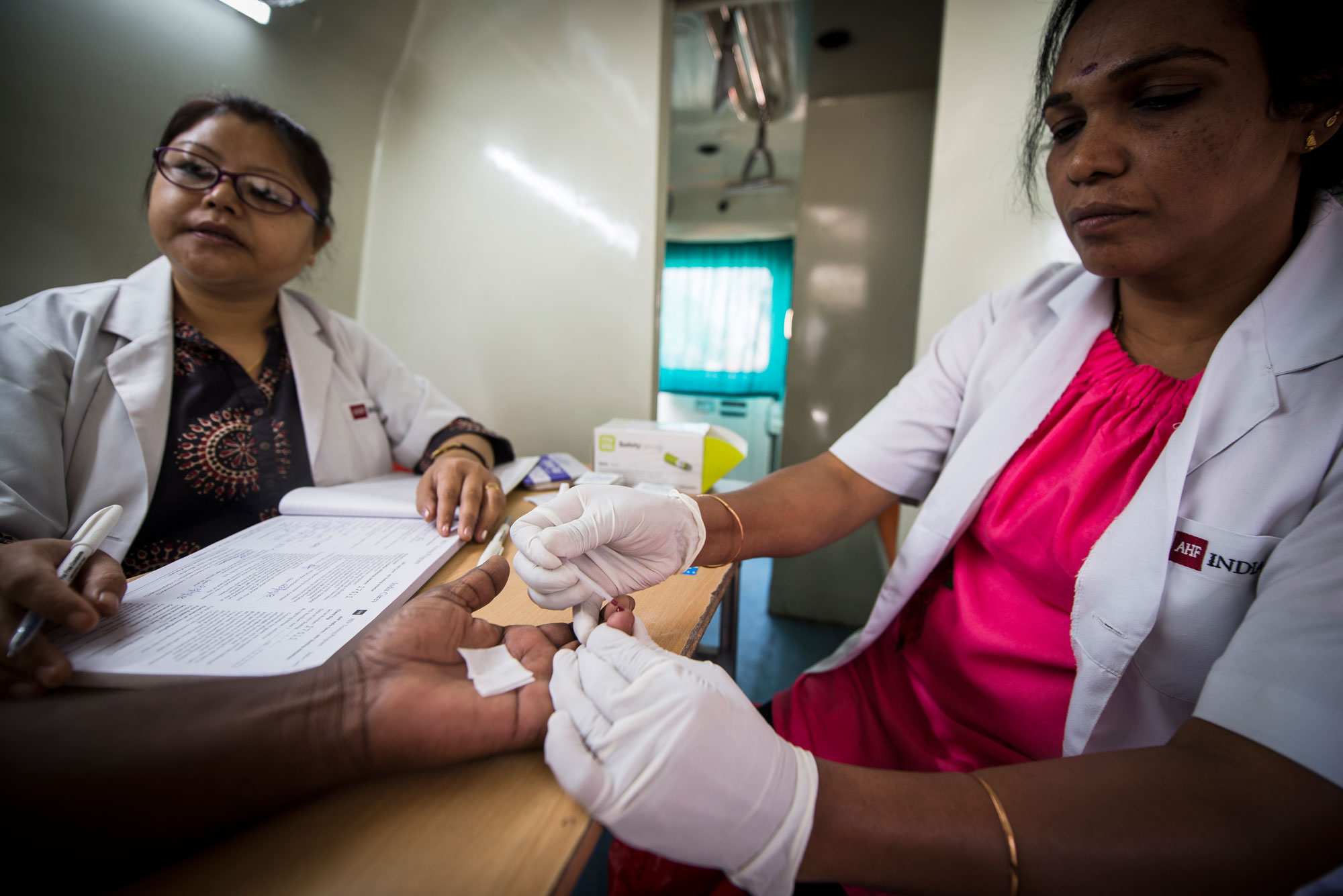 Health clinic workers administering a blood test for AIDS in Faridabad, India. Last year, an estimated 37.9 million people across the globe were living with HIV/AIDS. Those who receive HIV medicine early in their infection are living longer than ever.  Photo by Priyanka Parashar/Mint, courtesy of Getty Images

An HIV diagnosis is no longer a death sentence in most of the world. Thanks to advances in medicine, technology, and public health, significant progress has been made in the global fight to end the spread of HIV/AIDS since the height of the epidemic in the 1980s. Between 2000 and 2018, new HIV infections across the globe fell by 37 percent, to an estimated 1.7 million people, and those who receive HIV medicine early in their infection are living longer than ever before.

But improvements in HIV prevention and treatment have stalled in recent years, and challenges remain in addressing social and economic barriers to HIV education and treatment. The epidemic continues to disproportionately impact certain populations in the United States, including African Americans, Latinx Americans, men who have sex with men, transgender women, and people in the rural South. About 1.1 million people in the United States are currently living with the virus, and 15 percent are unaware of their status.

To combat these challenges, the US Department of Health and Human Services introduced the cross-agency initiative Ending the HIV Epidemic: A Plan for America earlier this year, with a goal of reducing new HIV infections by 75 percent in 5 years and by 90 percent in 10 years.

Is that goal attainable? That will be the subject of today’s School of Public Health annual William J. Bicknell Lecture. Titled Is Eradicating AIDS Feasible? the event will feature a keynote address by Jonathan Mermin, director of the Centers for Disease Control and Prevention (CDC) National Center for HIV/AIDS, Viral Hepatitis, STD, and TB Prevention (NCHHSTP) and a rear admiral in the US Public Health Service. Mermin’s career in the area of HIV/AIDS at the CDC spans more than two decades. As director of the CDC-Uganda from 1999 to 2006, he oversaw implementation of the first antiretroviral treatment program funded by the CDC outside of the United States.

“I am fortunate that I’ve had meaningful work in an area where public health meets social justice,” Mermin says. “It is the reason so many of us started working in HIV, and it keeps sustaining us through the hard days of life.”

Cohosted with the Providence/Boston Center for AIDS Research and held the day after World AIDS Day, the Bicknell Lecture will also include panel presentations and a Q&A session with HIV experts across academia, medicine, and government sectors. Mermin spoke ahead of the event about the technological advances in diagnosing and treating HIV, the possibility of a vaccine, and the challenges associated with stigma, discrimination, and the opioid crisis among those affected by the virus.

BU Today: In addition to the goals in A Plan for America, do you think the development of a vaccine is possible within the next decade?

Mermin: Developing a safe, highly effective vaccine for HIV has been an elusive goal. In 1984, then–Health and Human Services Secretary Margaret Heckler stated she was hopeful that a vaccine would be available in two years. But 35 years later, it is still not available. What has changed, however, is the number of ongoing efficacy studies and the variety of different scientific approaches.

HIV mutates rapidly, and when it is present in the body, it incorporates itself into the DNA of the immune cells the body sends to fight it. Yet there are hopeful signs for vaccine development. One experimental vaccine was 30 percent effective—not enough for practical use, but suggestive that it is possible. In addition, the antibodies produced by some people with HIV have been found to neutralize the virus, and there are studies evaluating whether providing these monoclonal antibodies to people will prevent infection.

How is the NCHHSTP working to reduce stigma among those who are exposed to, or infected with, the virus?

Stigma and discrimination are the opposite of public health. One method for reducing stigma is to help change people’s perceptions, so HIV is seen the same as we would any other serious—but treatable—health condition, such as diabetes or heart disease. We can share broadly that HIV is easily treatable and people with HIV can and do live long, healthy lives.

In addition, treating HIV effectively can reduce the amount of HIV in the blood so that it is undetectable through laboratory tests. Getting and keeping an undetectable viral load results in effectively no risk of transmission of HIV through sex.

More widely understood, these two facts—that HIV is treatable and that treatment results in effectively no risk of sexual transmission—can greatly reduce fear and stigma. The CDC has communication campaigns through traditional and social media that share this information, and the concept of “Undetectable=Untransmittable” is a worldwide message. The CDC also has an overarching campaign, Let’s Stop HIV Together, which includes resources and partnerships to help stop HIV stigma and promote HIV testing, prevention, and treatment. The campaign features people with HIV, along with the community in which they live, work, and play.

What are some of the technological developments that have changed the way we are able to diagnose, treat, or prevent the spread of HIV?

Today, the world has more tools than ever to treat and prevent HIV. One is antiretroviral medicine. When taken by people with HIV, it is highly effective at prolonging life and preventing HIV transmission.

When a type of antiretroviral medicine is taken by people who do not have HIV, it reduces their risk of acquiring HIV by about 99 percent. This is pre-exposure prophylaxis (PrEP).

So, we have highly effective methods for treating and preventing HIV.

Another development is HIV testing. In the early days of the epidemic, in the 1980s, there was no way to test for HIV. AIDS was diagnosed only after a person became ill. Now, we have multiple different tests that can be done at home, at a health care provider’s office, at a health department, clinic, or community-based organization, and they can be done by drawing blood, from a finger stick, or using a mouth swab. This has allowed not only more accurate testing in clinical settings, but has enabled us to bring testing to where people are instead of requiring them to come to us.

What is being done to combat the impact of the opioid crisis on the HIV epidemic?

The opioid crisis has had a major impact on the nation—with 69,000 people dying from an overdose in 2018. That’s approximately double the number of students enrolled at BU. In addition to an increase in overdoses, the larger number of people injecting drugs has increased HIV transmission through sharing needles and syringes during drug use.

Until a few years ago, we applauded the public health success of a more than 80 percent decrease in HIV incidence among people who inject drugs. Unfortunately, the decreases have since leveled off, and there have been outbreaks of HIV infection among people who inject drugs in different states and communities across the country. The CDC has established an outbreak identification and response team that works with health departments to detect clusters of new HIV infections and rapidly work to prevent new infections and help people who do have HIV access the treatment they need.

In collaboration with many partners, the CDC has also focused a great deal of effort on expanding syringe services programs. These programs provide people with sterile injection equipment, and they dispose of used needles, as well as provide other life-saving services, such as naloxone distribution to prevent overdose deaths, testing and linkage to treatment for HIV and hepatitis C virus, and referral to medication-assisted therapy for opioid use disorder. With some restrictions, Congressional law now allows federal funds to be used for syringe services programs, and various states, from Kentucky and West Virginia to New Mexico and Massachusetts, have supportive legislation and are implementing programs and expanding services.

The 2019 William J. Bicknell Lecture in Public Health, Is Eradicating AIDS Feasible? is Monday, December 2, from 3 to 5:30 pm at the School of Medicine Instructional Building, Hiebert Lounge, 72 East Concord St., and is free and open to the public. Jonathan Mermin’s keynote address will be from 3:15 to 4 pm, followed by a panel presentations with Izukanji Sikazwe, CEO of Zambia’s Centre for Infectious Disease Research; Douglas M. Brooks (SSW’99), executive director of community engagement, Gilead Sciences; Helen Ayles, a London School of Hygiene and Tropical Medicine professor of infectious disease and international health and director of the Research Zambart Project; and Gary Daffin, executive director of the Multicultural AIDS Coalition. The event concludes with a discussion and Q&A moderated by Susan Cu-Uvin, a Brown University professor of obstetrics and gynecology and director of the Global Health Initiative, and director of the Providence/Boston Center for AIDS Research. Find more information or register for the event here.

The lectureship is named in honor of the late William J. Bicknell, founder and chair emeritus of SPH’s department of global health. Livestreaming will be available here.