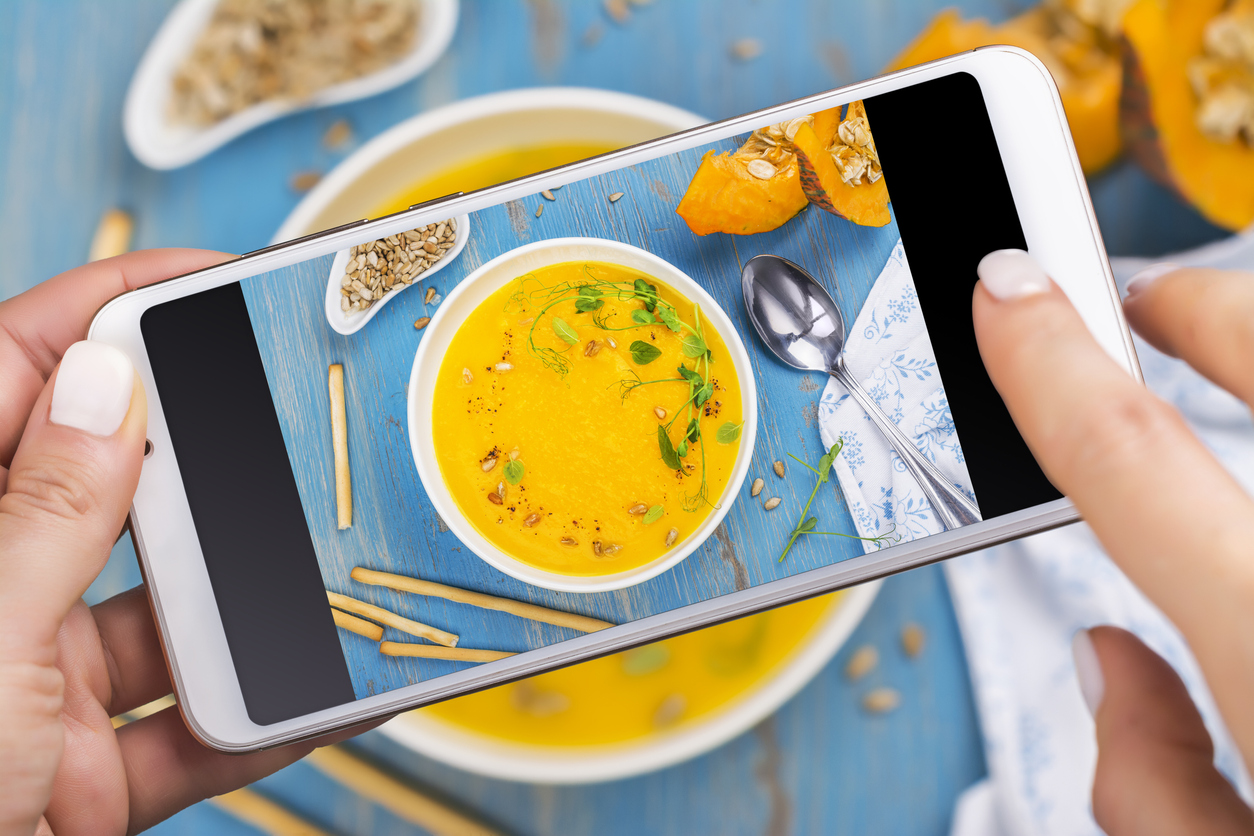 Self-proclaimed nutrition coaches, including celebrity book authors like Tom Brady as well as social media food bloggers, stand to make a profit by stoking body anxiety in their followers, say BU researchers, and may be contributing to a rise in orthorexia. Oftentimes, these “coaches” dole advice about what people should eat but lack an actual education in nutrition science. Credit: iStock/happy_lark

Tom Brady, arguably the best quarterback in the history of professional football, isn’t shy about sharing his “core nutritional philosophy.” No white sugar or white flour. He shuns peppers and tomatoes. He won’t cook with any oil other than coconut, and never lifts a saltshaker unless it’s filled with Himalayan pink.

It’s a diet that legions of fans and “clean eaters” try to mimic. Whether they buy his nutrition manual (at $200, with a laser-etched wood cover, it’s currently sold out), subscribe to his vegan, gluten-free, plant-based, high-protein meal delivery service, or just try to make a go of it based on what they read online, they all want to achieve their own humble version of the Brady experience—sans personal chef.

After all, if it works for Tom Brady, it must be good.

But is it, really? Or can healthy eating cross the line into an unhealthy obsession?

According to nutrition researchers, it can. They are seeing a surge in what they call orthorexia: an obsession with healthy eating that becomes so consuming it takes over almost every part of a person’s life.

And celebrity and fad diets, with their ultrastrict rules and dazzling health promises, may be one reason so many people are taking “clean eating” to the extreme, says Paula Quatromoni, associate professor and chair of the department of health sciences at Boston University College of Health & Rehabilitation Sciences: Sargent College. (Quatromoni also holds faculty positions at BU School of Public Health and BU School of Medicine.)

While better-known eating disorders like anorexia and bulimia tend to focus on food quantity, orthorexia is all about quality and selecting foods that are “pure” and “clean.” (Orthorexia isn’t officially recognized as a disorder by the American Psychiatric Association, but Quatromoni thinks it will eventually be listed as a distinct diagnosis.) Orthorexia can be difficult to spot because it often begins quite innocently, with healthy choices like cutting out red meat. But the list of off-limits food just keeps growing.

“More and more gets pushed off the plate, and eventually all you’ve got left is this very narrow range of foods that you’re willing to eat,” says Quatromoni.

Physically, this can lead to nutritional deficiencies, compromised bone mass, extreme weight loss, and malnourishment. It takes a mental toll, too. Quatromoni has seen students who can’t sleep because they lie awake, ruminating about what they ate that day. Others struggle through their classes, unable to focus and too preoccupied with thoughts of food to study.

“They are literally starving their brains,” she says.

Because food is often front and center in our social lives, people with orthorexia may reject time out with friends and family, shunning restaurants, parties, and even vacations. “It causes people to become socially withdrawn, to become socially isolated,” says Quatromoni. “They can’t possibly eat unless they have controlled every aspect of the meal down to the very last bite.”

And this is where they cross the line from simple healthy eating into an eating disorder, she says.

Yet the internet is full of toned, glowing celebrities trumpeting their own versions of clean eating as the secret to perfect health. You can Google what Gwyneth Paltrow eats for breakfast (smoothies plus her own branded “superpowder” supplements), what Jennifer Lopez has for lunch (kale salad), or what Dwayne “The Rock” Johnson chows down for dinner (a ten-egg-white omelet). And social media outlets like Instagram—where celebrities and self-proclaimed health gurus alike use hashtags like #cleaneating to show off equal parts kale-and-tahini bowls and before-and-after mirror selfies—make a picture-perfect case that all it takes to get a celebrity body is a “clean,” rainbow-esque plate of pretty fruits and veggies.

“It’s the influx of these pictures of what an ideal plate should look like and these pictures of what an ideal body should look like,” says sports nutritionist Mary Ellen Kelly (Sargent’04), who worked as a nutritionist for the Miami Dolphins until 2018. “The intersection of all this information—or misinformation—leads people to believe that this is achievable by eating this way.”

And, Quatromoni points out, these images constitute an “aggressive and purposeful” form of marketing. Fashion, entertainment, fitness, weight loss—these are whole industries that stoke body anxiety, then turn that anxiety into a profit.

“It’s a way of setting us up to never be satisfied with who we are,” says Quatromoni.

Though they’re celebrated as the pinnacle of the human form, athletes aren’t immune to eating disorders, Quatromoni points out. In fact, the intense focus on their body size and shape—the regular weigh-ins and “jiggle tests”—can set both female and male athletes up for restrictive eating and overtraining that ultimately sabotage their performance. But until recently, coaches and trainers were rarely aware of the danger.

That’s why, in 2004, Quatromoni partnered with Boston University Sports Medicine to create a nutrition consulting service to meet the needs of student-athletes on campus. “Nobody was looking for eating disorders in athletes back then, and when a concern was identified, no one really knew what to do,” says Quatromoni. “With that solution right here on campus, utilization of nutrition services by athletes exploded.” Today, the service is a component of the Sargent Choice Nutrition Center, and is widely recognized as an innovative clinical practice that is advancing the field of eating disorders in sport.

Pro teams are catching on, too. When Kelly joined the Dolphins, in 2014, there were only seven teams with full-time dietitians on staff. Today, more than half of NFL teams have one, and those that don’t have consulting dietitians on call, she says. While team dietitians spend much of their time fine-tuning athletes’ “fueling strategies” and devising team menus, they are also trained to spot eating disorders. “To [athletes], and some of the people around them, a detailed look at their dietary habits is all in an effort to do better in their sport,” she says. “But it can go too far.”

If even top athletes can get wrapped up in fad diets and disordered eating, how is a “regular” person supposed to sort out good nutrition advice from bad and find a healthy path to eating well?

“Get offline!” says Kelly. “If you’re really serious about making changes, sit down and talk with a professional.”

If that isn’t possible, she advises taking a close look at what you eat: eat more fruits and vegetables, choose water over sugar-sweetened beverages, and cook for yourself when you can.

And remember that those “perfect” lives on Instagram don’t tell the whole story, says Quatromoni. “Everyone is after the likes and the thumbs-up,” she says. “It’s just a snapshot of what someone wants to portray in one instant in time. It doesn’t show you how that person may be crumbling from the inside out, physiologically or emotionally.”

If you need extra help creating and maintaining a healthy eating plan, especially if your food choices are limited by medical necessity or by personal preference, it makes sense to reach out to a nutrition professional. But with an alphabet soup of titles out there, sometimes it’s difficult to separate those with specialized training from those without. Here’s what to look for:

– Nutritionist versus dietitian: Years ago, the “nutritionist” title was not regulated, but today “nutritionist” and “dietitian” are used almost interchangeably, says Quatromoni, especially because some professionals prefer the positive connotations of the word “nutrition.” Just make sure the individual is a registered, licensed professional.

– Find a professional: The Academy of Nutrition and Dietetics maintains a searchable list of credentialed nutritionists and dietitians at eatright.org. Or, learn more about nutrition services here at BU at the Sargent Choice Nutrition Center.

Orthorexia: Eating Clean, but Crumbling on the Inside

There is 1 comment on Orthorexia: Eating Clean, but Crumbling on the Inside

Orthorexia: Eating Clean, but Crumbling on the Inside
1
share this