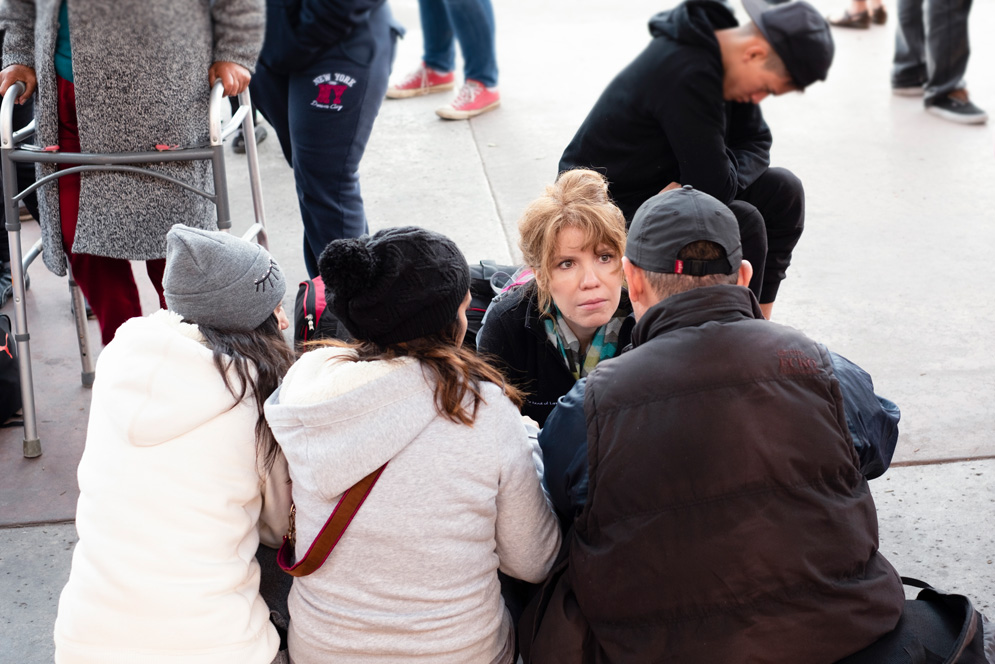 Karen Pita Loor, a School of Law clinical associate professor of law, talks to Central American migrants in Tijuana, Mexico, about the US asylum process, during a recent trip by LAW faculty and students to the border.

On a December weekend when most students were frantically cramming for finals or getting in some last-minute Christmas shopping, Chelsea Tejada (LAW’20) was visiting safe houses in the hills outside Tijuana, Mexico, helping LGBTQ refugees from Central America who are seeking asylum in the United States.

“Those stories really stuck with me,” Tejada says. “Their experiences are so unique and pointed and full of tragedy. I went to one house that had eight lesbian women staying there, and they had such stories of trauma and sexual violence in their home countries. I am a gay Latina, so it was harrowing to listen to their experiences.”

Tejada was one of three students and three faculty from the School of Law who traveled 3,000 miles to Tijuana to provide legal assistance to members of the “migrant caravans.” Students say the trip was grueling both physically and emotionally, but nothing compared to what the migrants had endured traveling from Guatemala, Honduras, and El Salvador, fleeing rampant gang violence, political persecution, and more.

“There were five thousand immigrants, refugees, waiting at the border to cross, and a real absence of adequate legal services,” says Sarah Sherman-Stokes, a LAW clinical instructor and associate director of the Immigrants’ Rights and Human Trafficking Clinic. The people trying to help them are doing a tremendous job, she says, but they simply cannot keep up with the demand. “This felt like a way that we could plug in and actually be useful.”

President Trump “was speaking about this as an emergency, a crisis situation,” says Karen Pita Loor, LAW clinical associate professor of law, who came up with the idea for the trip. “I thought it would be incredibly interesting to go to the border and see what was going on.” She planned the trip with Sherman-Stokes and Julie Dahlstrom, clinical associate professor of law, who directs the Immigrants’ Rights and Human Trafficking Program. Sherman-Stokes reached out to a contact at Al Otro Lado (“To the Other Side”), a binational legal services nonprofit that serves indigent deportees, migrants, and refugees in Tijuana, and asked if they could use some help.

“To me, it’s not worth doing these things unless we can bring students,” says Sherman-Stokes, so they brought along Tejada, Genesis Guzman (LAW’19), and Jesus Zelaya (LAW’20), all of whom are native Spanish speakers with an interest in immigration law. “It’s such a rich pedagogical experience to expose them to these realities in real time.”

The BU contingent flew into San Diego on a Thursday afternoon, took an Uber to the El Chaparral port of entry to the United States in San Ysidro, and walked across the border. For two days, they moved between refugees waiting to hear their numbers called on the Mexican side at El Chaparral and the tent camp housing approximately 5,000 refugees outside the Benito Juarez stadium.

“It’s kind of wild how close it is, that all of it is happening so close to us that you can take an Uber to the site of this trauma and violence, where people are living essentially in a makeshift refugee camp, completely desperate, waiting to seek protection,” Sherman-Stokes says.

They circulated through the crowds, asking individuals if they would be seeking asylum and if they’d be talking to an attorney, then walking them through the process, including the “credible fear interview,” during which the migrants must convince US officials they have a legitimate reason not to return to their country. They also discussed with them the possibility that they could be detained.

In Tijuana, the BU students and faculty say they saw “multiple layers of hopelessness,” many unaccompanied children, and a heavy Mexican police presence. “We’re working to ensure that immigrants’ rights are protected at a place where there’s tremendous vulnerability to exploitation and trafficking, and we saw that firsthand, and also witnessed the incredibly poor conditions in which they’re living,” says Dahlstrom.

They encouraged migrants to attend more detailed workshops on the asylum process at the Al Otro Lado office, one of which was led by Guzman. “It was pretty amazing,” Sherman-Stokes says. “She just jumped right in to a room of 80 or more adults and children, and she explained the nuts and bolts of asylum.”

Guzman says the trip was rewarding, but also difficult, “because we talked to a lot of people individually and heard their stories, a lot of them involving really horrendous violence. It was kind of difficult having to speak to them and say, ‘You might not have an asylum claim,’” under US law.

Sherman-Stokes says that LAW Dean Angela Onwuachi-Willig has been consistently supportive of clinical programs and pro bono work by students and faculty. “It’s really meaningful to feel that someone in charge cares about this work and supports this work and values this work. It makes all of us feel more energized.”

“BU Law is known for graduating practice-ready students. Our experiential offerings play a critical role in our ability to do so,” says Onwuachi-Willig. “This opportunity not only gave our students a chance to deepen practical skills like communicating with and interviewing clients; it also gave them the chance to deepen soft or intangible qualities they will need to be excellent lawyers—such as empathy—and it allowed them to see firsthand that our democracy works best when everyone, including those most vulnerable in our society, have access to legal services and counsel.”

Tejada says she was deeply affected by her visits to LGBTQ safe houses. “I had one woman share how she had a girlfriend and the mother of that girlfriend would call the police on her, and she had the police come after and tie her up and beat her. Another woman had an acquaintance who raped her and said, ‘It’s such a shame that you like women, I’m going to make you a real woman.’ And the police attacked her too, someone pointed them in her direction because of her identity.

“The experience really confirmed for me how powerful it can be to have a law degree,” Tejada says.

After two nights in a hotel in Tijuana, most of the group took a red-eye home on Saturday night. They returned to BU determined to find ways to continue to aid the migrants remotely and say they’re considering another trip to Tijuana, perhaps over spring break.

“We very much felt like the work we were there to do was triage a crisis situation,” says Dahlstrom. “We saw these immense legal needs. There were tangible ways we made an impact but that was miniscule in terms of the numbers of people.”

A few families they met their first day on the ground had their numbers called and had begun the asylum process by the time the BU group left late Saturday. “We were able to hug them goodbye and tell them good luck,” Sherman-Stokes says, adding that they also gave the migrants their contact information.

They have yet to hear from any of them.

Offering a Helping Hand to Migrants Waiting to Enter the US