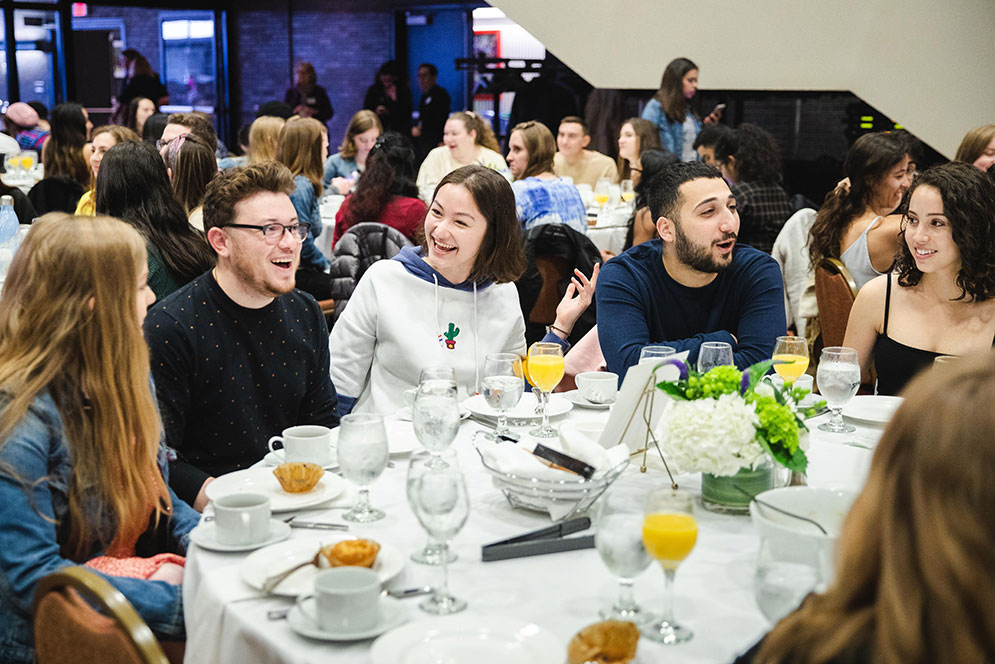 The BU Class of 2019 watched a highlight reel of their past four years at Friday’s Senior Breakfast. Among the memories were Beyoncé’s Lemonade video, the inauguration of President Donald Trump, and the Patriots and Red Sox championships.

Marcia McNutt, the president of the National Academy of Sciences, whose background as a geophysicist was instrumental as she helped to lead the cleanup of the 2010 Deepwater Horizon oil spill, is this year’s Boston University Commencement speaker, seniors learned Friday morning at the Class of 2019 Senior Breakfast. Their student speaker at Commencement will be senior Adia Turner (CAS), a Thurman Center for Common Ground ambassador on her way to being a public school teacher in St. Louis, Mo., this fall.

McNutt will deliver the 146th Commencement address on Sunday, May 19, at the main graduation ceremony on Nickerson Field.

Robert A. Brown, BU president, announced McNutt as Commencement speaker at the annual event at the George Sherman Union Metcalf Ballroom, where more than 2,000 well-dressed soon-to-be grads packed in for a fancy brunch of roasted tomato and mozzarella tarts and Lyonnaise potatoes. A slideshow of photos and iconic songs from the last four years played as students filed in.

Brown also revealed the winners of the University’s highest teaching honors. This year the top honor, the Metcalf Cup and Prize for Excellence in Teaching, goes to Robinson “Wally” Fulweiler, a College of Arts & Sciences associate professor of earth and environment and of biology. Neal Fleisher (SDM’84), a Henry M. Goldman School of Dental Medicine clinical professor of general dentistry, and Gregory Stoller, a Questrom School of Business senior lecturer in strategy and innovation, are the recipients of the Metcalf Awards for Excellence in Teaching. The three faculty members will be honored at the 2019 Commencement ceremony.

McNutt was the first female elected president of the National Academy of Sciences, in 2016. She was previously editor in chief of the Science journals, president and chief executive officer of the Monterey Bay Aquarium, and director of the US Geological Survey. During her three-year tenure at the Geological Survey, her team responded to major disasters, among them the Deepwater Horizon oil spill. She has received the Maurice Ewing Medal for her contributions to deep-sea exploration and the US Coast Guard’s Meritorious Service Medal for her assistance in containing the Deepwater explosion and spill that killed 11 crewmen.

Holmes Ward is WCVB’s director of public affairs and community service and host and executive producer of the magazine program CityLine, which addresses issues facing Bostonians of color. She is an inductee of the Massachusetts Broadcasters Hall of Fame and a recipient of the National Academy of Television Arts & Sciences’ Silver Circle Award for Lifetime Achievement.

For 14 years, Howe was president and CEO of the humanitarian organization Project HOPE, which delivers healthcare and advocates for the world’s most vulnerable populations. Howe is an internationally prominent cardiologist, winner of distinguished alumnus awards from both the School of Medicine and the University, and is a BU trustee and a former vice chair of the Board of Trustees.

Shuler Donner has had a hand in some of Hollywood’s most successful films over her 40-year career, among them X-Men and Deadpool, the Brat Pack films Pretty in Pink and St. Elmo’s Fire, and Free Willy, You’ve Got Mail, and Any Given Sunday. In recent years, Shuler Donner has set her sights on television, as executive producer of Legion and The Gifted. 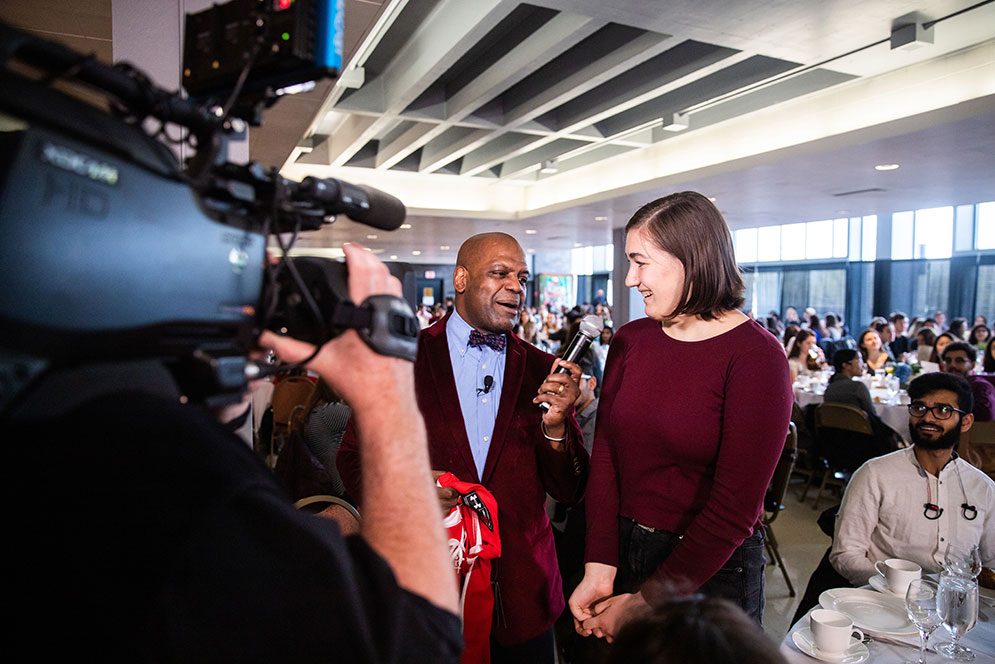 The breakfast kicked off with the BU Allegrettos singing “Lose My Cool” by Amber Mark. Next, event emcee Kenneth Elmore (Wheelock’87), associate provost and dean of students, walked among the throng of 2019 graduating seniors, interviewing them, as a camera followed. “What does the ‘A’ stand for in Robert A. Brown?” he quizzed three students, with the final one coming up with the correct answer: Arthur. Robert Allan Hill, dean of Marsh Chapel, next led an invocation prayer, and pointing out that May 12 is Mother’s Day, he told the seniors that it would be a good idea to send flowers—and call.

Brown recalled some of the milestones this year’s seniors have experienced, like the opening of the Joan & Edgar Booth Theatre, the University’s launching its Climate Action Plan, and the merger of BU and Wheelock College.

New-ish alum Jordan Fessehaie (SHA’18) welcomed the Class of 2019 as new members of the BU Alumni Association. Describing herself as one year into “adulting,” she asked the tables of students to raise their hands if they came to BU undecided, changed majors, or changed classes. Practically everyone shot a hand up, proving that few stick to their original plans. “You’ve learned enough about your major—now it’s time to learn about yourself and the phenomenal people you’ll meet along the way,” Fessehaie said.

Look for stories on BU Today next week for more information on the honorary degree and Metcalf recipients.