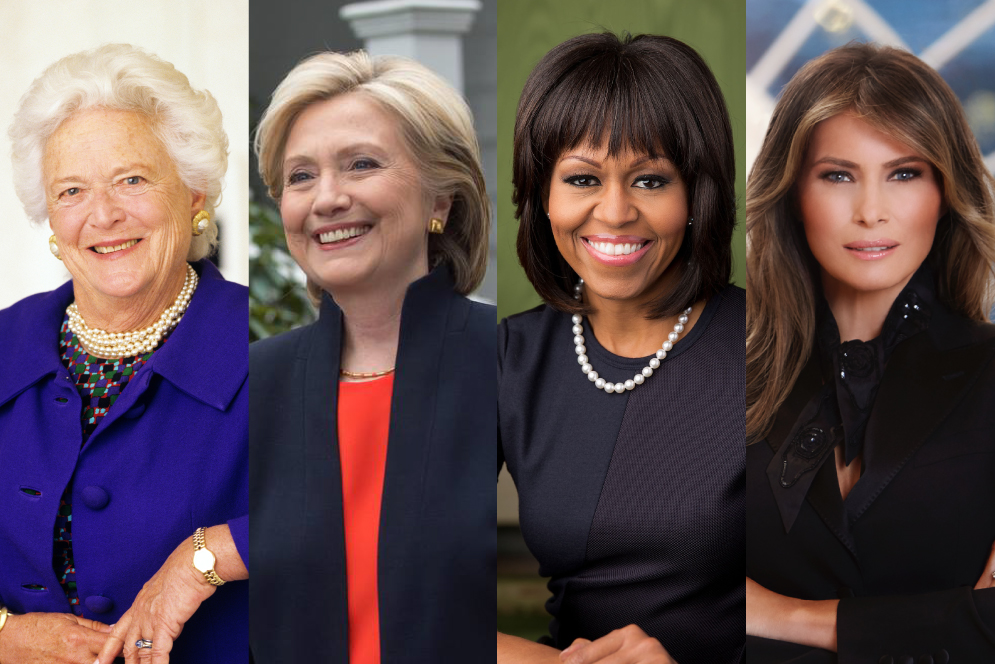 There may be no better time to talk about women’s political rhetoric than right now, with as many as five women already seeking the 2020 Democratic presidential nomination.

And that makes publication of Tammy R. Vigil’s new book, Moms in Chief: The Rhetoric of Republican Motherhood and the Spouses of Presidential Nominees, 1992–2016 (University Press of Kansas, 2019), especially timely.

The College of Communication associate professor of communication takes a deep dive into the way women from Abigail Adams to Melania Trump define themselves on the campaign trail. Vigil also looks at how they are defined by their husbands’ opponents and in national media coverage, making a case that ancient ideals about what it means to be a woman continue to constrain women. 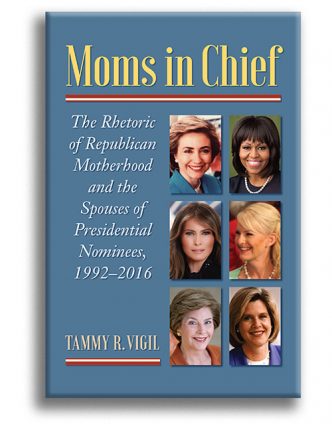 Vigil spoke with BU Today about how her research on dozens of women from across the political spectrum helped her realize why, despite cavernous political differences, they often characterize themselves the same way.

BU Today: Your book’s subtitle refers to republican (the philosophy, not the political party) motherhood in particular. What inspired that?

So the idea of republican motherhood was an idea based on that a woman’s contribution to the nation was through her relationships and how she acted in her role as a mother and a wife.

And you found that today’s presidential spouses have much in common with ancient Sparta?

It makes sense. They’re being looked at as wives because they are married to the nominee. But when I started looking through that lens, it really explained why people as diverse as Elizabeth Dole and Cindy McCain were embracing this idea of: look at me, I’m the deferential wife and I’m the good mother. Elizabeth Dole didn’t even have kids and she was still playing that sort of role.

In your book you talk about how the “spouses speech” came to be in 1992. Why is that year significant?

It was interesting, because in 1992, you get Barbara Bush and Hillary Clinton, who are representing extremely different generations of women and supposed to be representing these extremely different points of view about womanhood, and American womanhood in particular. So you’ve got Barbara Bush, who was super-traditional, and Hillary Clinton, who was supposed to be the sort of more modern woman.

Hillary Clinton got so bashed by the press and by the parties during the summer before the convention that she ended up basically trying to switch gears and say, “Yeah, but look, I’m a mom and wife and I’m so supportive,” because the press, in particular, but also the political parties, were punishing her for being a more modern kind of woman.

That’s why that whole First Lady cookie competition in Family Circle magazine started in the first place. Democratic candidates going up against Bill Clinton made a big deal about how Hillary Clinton refused to give up her work even though her husband was governor of Arkansas, and that she didn’t represent American women.

And a reporter asked her about it and she made this sort of glib, really interesting comment that she supposed she could have stayed home and baked cookies, but instead decided to pursue her career. And then she went on to talk about how women get to make choices, and they could choose to stay home or they could choose to go to the workforce. And so it was really very supportive of women’s decisions to do different things with their lives.

The press just totally ate up that one little sound bite of staying home and baking cookies, which made it sound like she hated homemakers. She was trying to rehabilitate her image when she agreed to enter a recipe contest in Family Circle magazine.

Barbara Bush and Hillary Clinton both submitted recipes for different versions of chocolate chip cookies. Ross Perot’s wife, Margot, didn’t. She was criticized for it, and reporters joked that as a wealthy woman, she probably never baked, an assumption many commentators have made about Melania Trump.

First Ladies and nominees’ spouses are under intense media scrutiny to be all things to all people. Out of all the women you studied, who seemed to handle it the best?

I think the closest we’ve come so far is Michelle Obama. I would say she did not hit it exactly right, because she downplayed her professional life the same way that Hillary had to, but she got to sneak in enough of it.

People actually thought of her as a working mom, even though she wasn’t. She had given up her job and what she had been when Barack wasn’t in the time frame. And so there’s a bit of a step forward when you see Michelle Obama and the way she talked about more broad topics, but she still couched them as: I’m a mother, I’m concerned about my daughters, instead of being able to just say, “Look, I am a citizen, and I’m concerned about these things…,” which is what men can always do.

So she offers this little tiny sliver of hope that we might be able to make at least some change. But she still couched everything as being the Mom-in-chief.

Who is the least popular woman you studied?

There’s a lot of coverage of the people who end up being First Spouse, so we know them pretty well. But the one person that I kept saying gets a raw deal is Teresa Heinz Kerry. She had such an interesting and diverse background, in terms of her philanthropy and her work running the charitable component of the Heinz family funds. She was considered a powerhouse in Pennsylvania politics before she got involved with Massachusetts Senator John Kerry, and was always interested in the environment and environmental causes.

She’s a really fascinating woman who got distilled down into this offensive stereotype by the press and the Republican Party as a troublemaker, because she had power and money of her own and she couldn’t be told to shut up.

When Hillary Clinton ran for president, she suggested on Jimmy Kimmel calling her husband “First Dude” or “First Mate.” How did Bill Clinton handle this role?

Clinton looked like a strong, independent, powerful force, which most men are trying to look like when they’re candidates. The problem is that image makes Hillary look unapproachable, and he’s trying to make her seem relatable.

In many ways, he couldn’t win either.

What do you think of the speeches by women running for president in 2019?

Senator Kirsten Gillibrand (D-N.Y.) announced her candidacy as a young mom, like that’s her first point of credibility. So it continues and continues. It’s just such an ingrained part of our society that people don’t even notice it.

Your book has interesting examples of women being turned into political liabilities: President-elect Andrew Jackson’s wife, Rachel, used to smoke a pipe and refused to ride her horse sidesaddle, and Dolley Madison was accused of having an affair with Thomas Jefferson while he was president.

Today we have, “Don’t vote for Ted Cruz because his wife had a nervous breakdown” or for Donald Trump, because his wife posed nude when she was a model. It’s like, all right, who’s really getting hurt by that?

How did you do your research?

Most of the research I did was online, but there’s a National First Ladies Library in Canton, Ohio.

There were so many stories.

You probe the unofficial contest between candidates’ spouses and use it to take a broader look at how our culture defines womanhood. What would you like to see changed about that definition?

Well, it’s sort of like the plight of the working mom, who wants to be intellectually challenged, but also wants to be a good mother. Women have to meet a standard that is just so extraordinarily high. And there are many more standards for women. The traditional perspective is that to be a good citizen, you have to be a good wife and mother, right? But now as we move forward, instead of reexamining what it means in terms of being a woman, thinking about what being a woman really means as a person, we just sort of keep adding on roles instead of reevaluating. Now you have to be the most caring wife and mother in the world and you have to have a job and now you have to make a bunch of money.

I think that was part of the book’s conclusion: how when you talk about men and fatherhood, there are men for whom fatherhood is a thing they do, whereas motherhood is a thing women are. And that is an essential difference. It doesn’t mean it’s true for everybody, but it’s a general perspective.

With so many more women running for office now, are you seeing rhetorical signs that the tide is shifting?

I still think there’s a tendency to lean more toward the traditional. But it’s nice and it’s heartening to see that we’re broadening our perspectives and hopefully will continue to do it more. It’s just a matter of: how do we do it? That’s part of the reason I wrote the book. If people don’t think about it, if they don’t talk about these kinds of issues, then it isn’t going to change, or at least it’s not going to change as quickly.

Much has been made of Massachusetts Senator Elizabeth Warren’s electability, or lack thereof. How do you view her candidacy?

Yeah, she’s a bit different. I think both she and California Senator Kamala Harris move away from these tropes, which I appreciate a great deal.

But no matter what happens, likability is going to be a big topic for both these women. It’s going to be interesting because people say things like, “Well, I like Elizabeth Warren, but she’s too assertive” or “She’s got that shrill voice…”

Whether or not she is successful, her being in the race is a good thing for getting people comfortable with the idea that there are different kinds of women and they don’t all have to be Barbara Bush, Tipper Gore, or Ann Romney—a kind of homemaker stereotype, a sort of quiet helpmate.

Moms in Chief Explores the Pitfalls Women in Politics Face