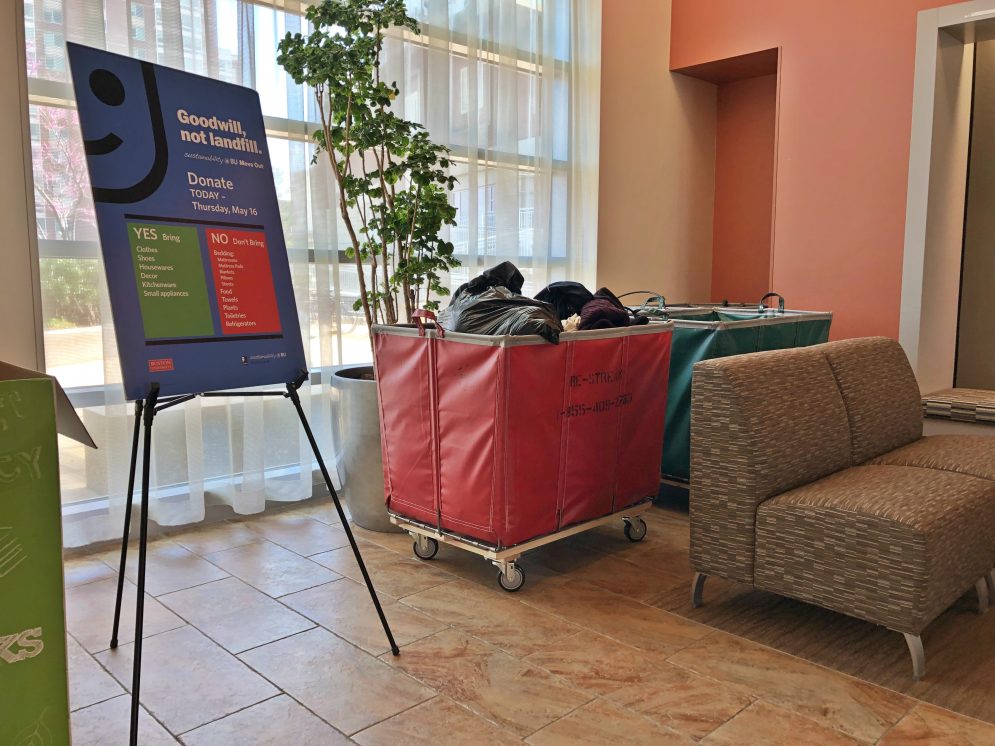 Students can drop their unwanted items—clothing, shoes, accessories, kitchenware, and knickknacks—in Goodwill donation bins across campus through May 16. Photo by BU Today

It’s become an annual rite of spring on college campuses: as exams begin and students start packing up for the summer or for graduation, they’re faced with the daunting task of figuring out what to do with all that stuff they’ve accumulated. They either don’t want to lug it all to their next apartment or find that it’s too cumbersome or too expensive to ship home. Those matching comforters you and your roommate bought? Gone. The plates you inherited from a former resident? Also gone. Ditto the boots you bought for Boston winters—you won’t need them in Southern California.

But don’t throw it all out in trash bags: for the past nine years, Morgan Memorial Goodwill Industries has partnered with BU to make it easy for students to drop off their unwanted items through its Goodwill, Not Landfill program.

“Diversion is our most important priority here, in terms of move-out,” says Lisa Tornatore (CAS’02), BU’s sustainability director. Americans send between 15 billion and 20 billion pounds of textile waste to landfills every year. But by donating to Goodwill, your old items have a chance at a second life.

Giant plastic Goodwill donation bins arrived in the lobbies of BU’s large dorm-style residences last month on Earth Day and will remain through Thursday, May 16. During that time, anyone is welcome to drop off donations, even those who don’t live in an on-campus dorm. Simply drop your items in one of the dorm bins, or bring them to the Goodwill store at 965 Commonwealth Avenue, where there is a specially designated BU bin. You can find a complete list of bin locations on the sustainability@BU website.

Goodwill accepts used clothes, shoes, decorative items, kitchenware, small appliances, CDs, DVDs, and accessories. As the bins fill up, the nonprofit comes by to collect the donations and bring them directly to the Roxbury distribution center and headquarters just three miles away. There, items are sorted and shipped to its Boston area stores.

And all those used shoes, purses, hats, scarves, dishes, and glassware help support a good cause. Goodwill Boston uses the proceeds from its stores to fund job training and placement services for individuals with barriers to employment. “If you donate to Goodwill, you’re helping to create jobs, essentially because you’re supporting the training programs we offer the community and you’re supporting all the other programs that we offer,” says James Harder, Morgan Memorial Goodwill Industries director of communications.

But you can’t donate just anything. Goodwill does not accept linens and towels, food, plants, beds and foam bedding, furniture, refrigerators, or toiletries. “Keep in mind that these are things that are going to go back to our stores, so don’t just look at it as you’re throwing away trash,” says Harder. “We would like to sell these items, and in the process that helps our mission.”

You will find a complete list of accepted and not accepted items on the Goodwill, Not Landfill website.

Goodwill has always had a special tie to Boston University—it was founded by a BU alum, the Rev. Edgar J. Helms (STH’1893) while he was earning a master’s degree.

The diversion efforts of sustainability@BU began in 2009. At the time, it had teamed up with a small organization that was unable to handle the amount of items donated by BU students. So a year later, Goodwill Industries board of directors member Peter Morrissey (COM’87), a College of Communication associate professor of public relations, proposed partnering with Goodwill Boston.

Tornatore says BU’s collaboration with Goodwill is unlike any other university diversion program in the country. Since Goodwill is able to pick up donations directly from dorms, the BU community is able to donate at an enormous scale: the University has donated over 650 tons since 2010.

She points out that Terriers’ donating unwanted items also makes life a little easier for BU Facilities, Housing, and Residence Life staff tasked with cleaning out dorm rooms after move-out. Finally, the proceeds from each donation support Goodwill’s mission to give back to the greater Boston community.

Moving Out? Don’t Throw Away Those Old Clothes

Moving Out? Don’t Throw Away Those Old Clothes
0
share this