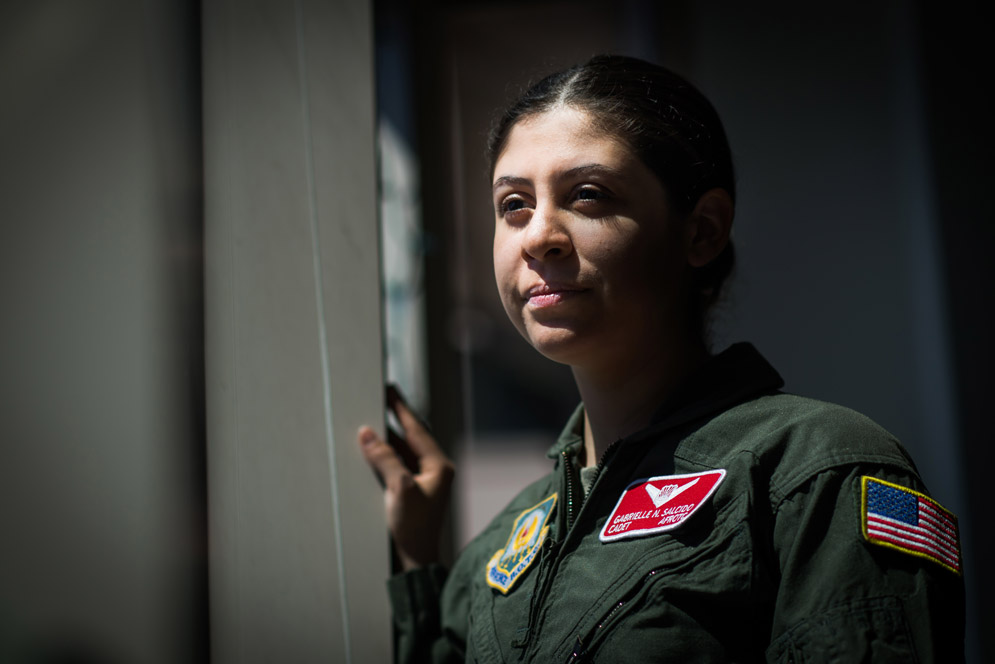 Gabrielle Salcido originally joined ROTC because she wanted to learn to fly, but the program has taught her valuable leadership and time management skills. When she wears her Air Force uniform around campus, she’s often stopped and thanked for her service.

Wednesdays are uniform days for Gabrielle Salcido: watch on her left wrist, hair in a neat, tight bun, and an olive green flight suit. On her chest is a rectangular red patch reading “Gabrielle N. Salcido, Cadet, AFROTC.”

Senior Salcido (CAS), a Reserve Officers’ Training Corps (ROTC) Air Force cadet set to graduate in two-and-a-half weeks with a bachelor’s degree in mathematics, has spent her four years at BU balancing the demands of the military with those of a full-time student. She says that serving in ROTC has been a tremendous experience. 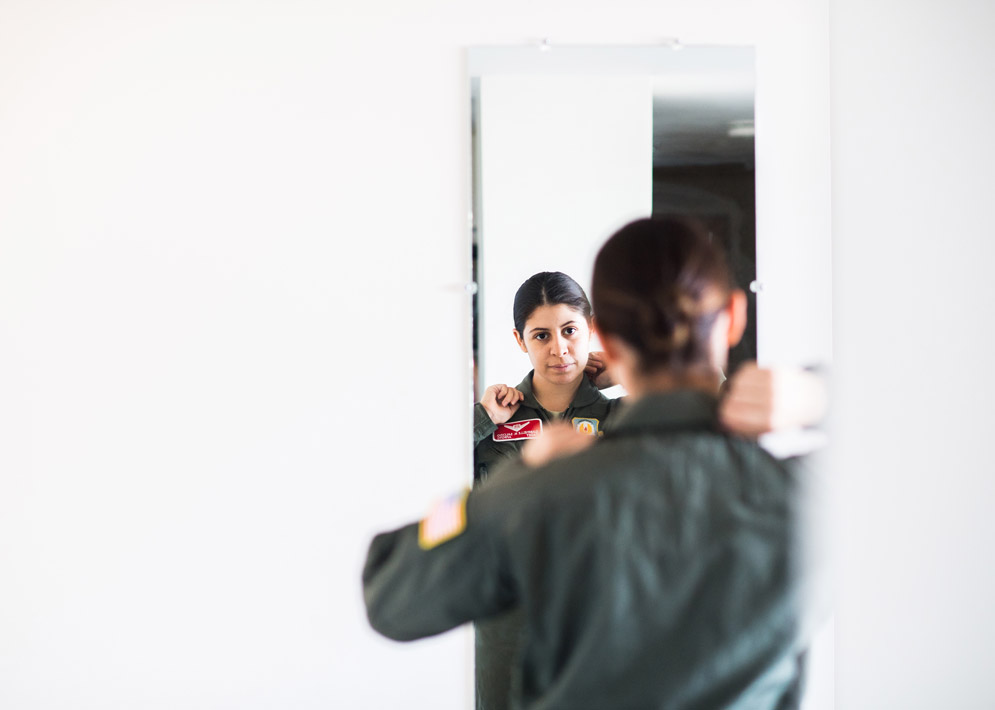 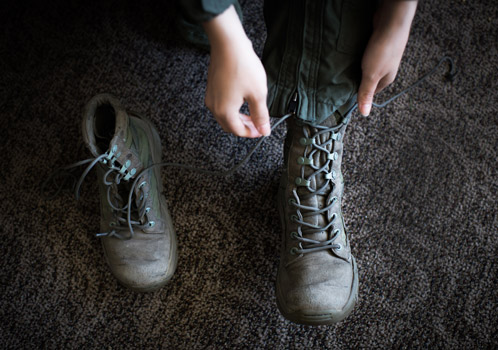 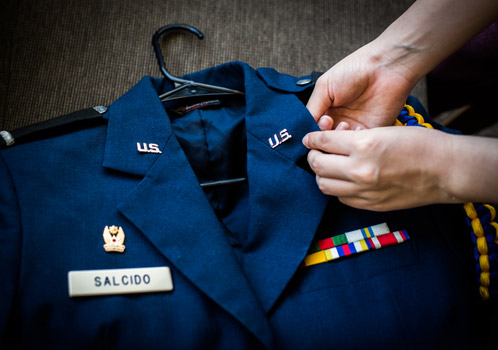 “We have a ‘wingmanship’ policy, which means you are a wingman to every cadet around you,” says Salcido, who casually drops military terms into her conversations. “You will always have a support system. And sometimes things are sucky, and you embrace the suck. It really helped me through the program.”

BU has more than 115 students in its Air Force, Army, and Navy ROTC programs (several more are from other Boston-area schools). Upon graduating, Salcido will be commissioned as a second lieutenant, and in September, she will travel to San Antonio, Tex., to become a remotely piloted aircraft (RPA) pilot. She could fly drones such as the MQ-9 Reaper and the RQ-4 Global Hawk. She has signed on for at least six years of active duty. 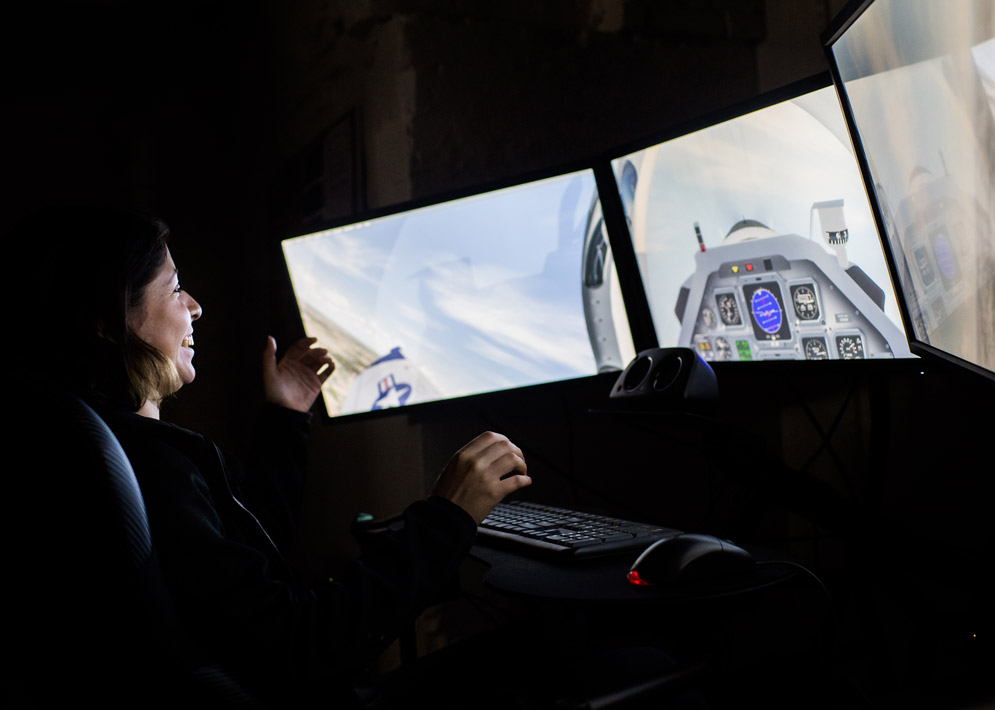 Salcido practices on a flight simulator once a month to become more comfortable with flying.

Salcido grew up an army brat, moving with her family to bases in New Mexico (which she considers home), Tampa Bay, Kentucky, Belgium, and South Korea. (Her father retired as a sergeant first-class after spending 20 years in the Army.) She hadn’t always envisioned a career in the military, but when she realized it could offer a way to learn to fly, she began to consider it seriously. “Seeing those planes fly overhead, the flight line [planes lining up], and experiencing being around that environment—it was something I was interested in,” she says.

Her decision to enroll in ROTC was made “last minute,” she says, just before starting at BU. “I didn’t know what to expect or how strict it would be. I was nervous, but when you talk to all the other people who are nervous too, [and see] they have your back, it was easier.” 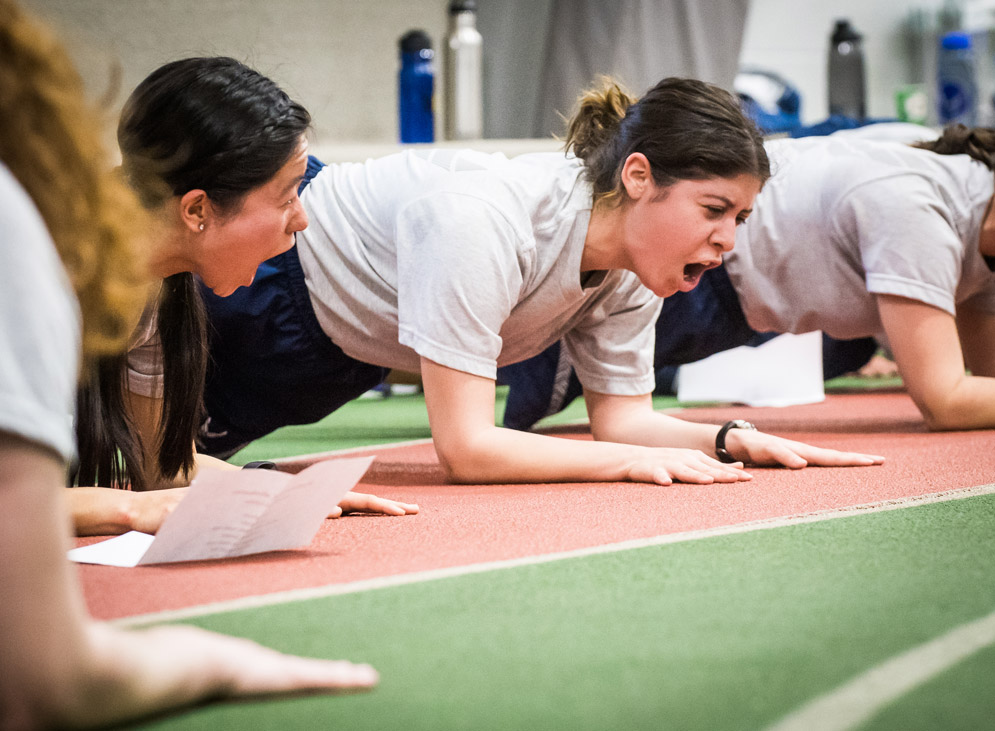 ROTC requires its soldiers and scholars to work their academic schedules around various training sessions, classes, and team events, making them adept at time management, Salcido says. On Tuesdays and Thursdays at 6 am, Air Force ROTC students have a one-hour Physical Training (PT) session. Wednesday evening is reserved for the Leadership Laboratory (Lead Lab), where they learn military customs and hands-on training designed to prepare them for active duty. 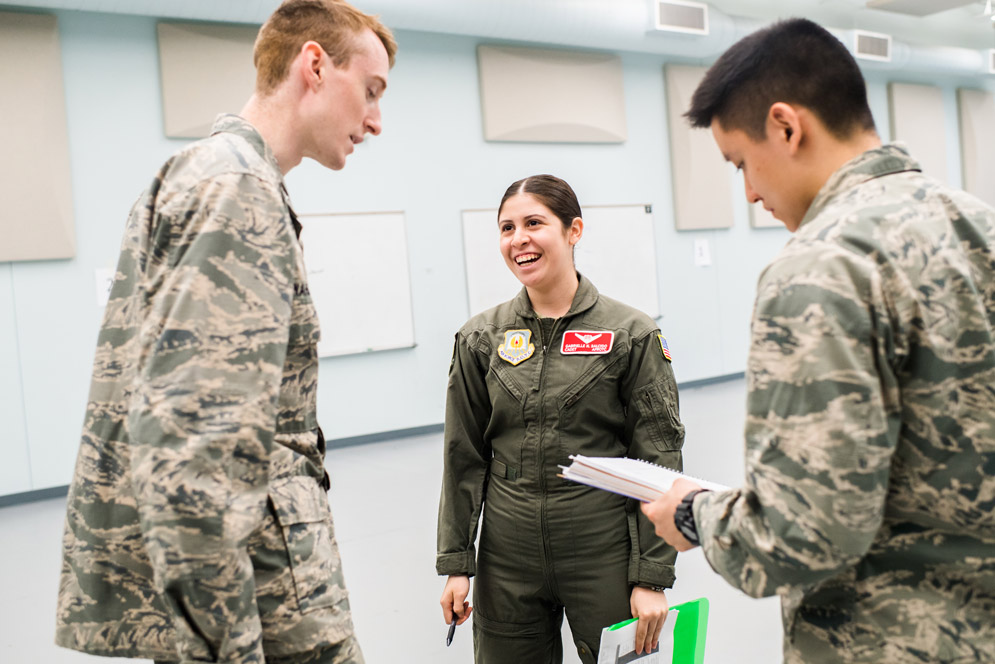 In March, Salcido led junior cadets in an exercise designed to teach them how to find an explosive device.

Last semester, Salcido was chosen to be cadet wing commander, responsible for the 17 other Air Force cadets at BU. “You are the highest-ranked cadet,” she says. “We have morale events, training, and all those things, and the wing commander is responsible for making sure that everything that needs to happen, happens.”

Salcido may have joined ROTC because she wanted to learn to fly, but as she prepares to graduate, she realizes the program has given her valuable leadership experience that she didn’t expect. The job security is another nice benefit—while her classmates are on the job hunt, she’s known what job she would walk into for two years now.

It is, she says, the dream of a lifetime.

ROTC Cadet Gabrielle Salcido: Taking to the Sky after Commencement

There are 6 comments on ROTC Cadet Gabrielle Salcido: Taking to the Sky after Commencement

ROTC Cadet Gabrielle Salcido: Taking to the Sky after Commencement
6
share this