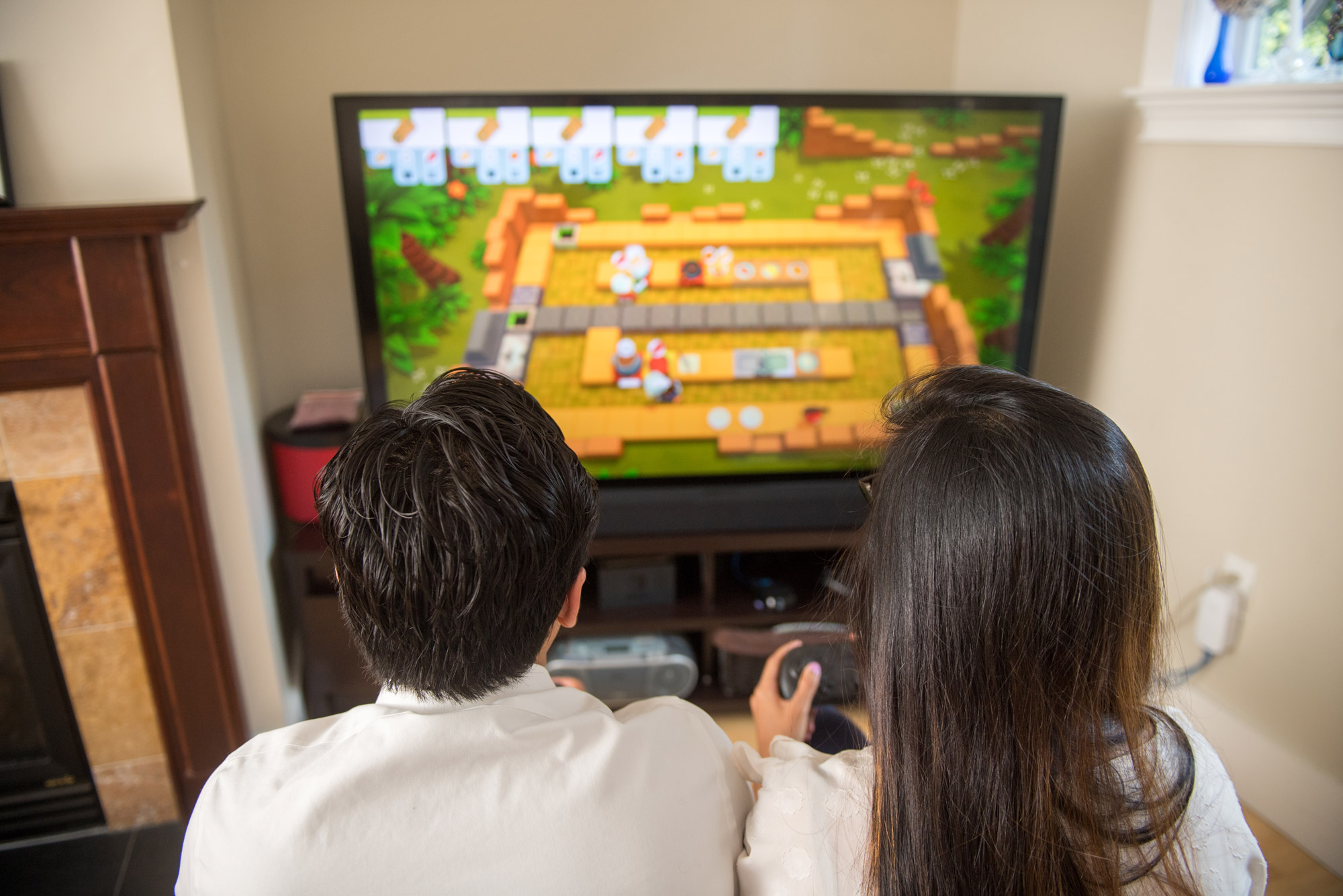 Questrom grad student Kruti Kanojia and her husband, Alok Kanojia, a Harvard psychiatrist, launched the online start-up Healthy Gamer, aimed at helping parents guide their children toward a balance between the virtual gaming world and reality. On the screen is Overcooked, a video cooking game

Flummoxed by Your Family’s Fortnite Addict?

You’re worried about your 15-year-old son. His grades are sliding. When you try to talk to him about school, he snaps at you that classes are boring. It’s a fight to get him to come out of his room for dinner. He holes up in there for hours at his computer, glued to Fortnite: Battle Royale.

Is this just a phase—or is he addicted to gaming? Are video games going to ruin his life? What can you do about it?

With more than 2.6 billion people around the world playing video games, including in two thirds of American households (Fortnite gamers alone number 250 million), according to the Entertainment Software Association, it’s not surprising that lots of parents are anguished over how to handle their kids’ engagement in this seductive virtual world.

MBA student Kruti Kanojia (Questrom) wants to help, and she’s got a former gaming addict as her expert advisor—her husband, Alok Kanojia. With help from a $10,000 grant from Innovate@BU’s Summer Accelerator program, Kruti Kanojia’s start-up, Healthy Gamer, launched in early July. It provides an online guide for parents, with a series of user-friendly video lessons explaining things from gaming’s appeal to smart kids to how to talk to your child about his or her gaming habits to how to reengage your gamer in the real world.

Kanojia’s cofounder, and Healthy Gamer’s professional expert on addiction, Alok Kanojia, is a Harvard-trained psychiatrist. He opens one of his Healthy Gamer lessons by volunteering that he turned to video games in the first grade because he was frustrated by how bad he was at sports. Halfway through college, he was spending so much time playing video games that he almost flunked out.

“He lost five years of his life because of gaming,” says Healthy Gamer CEO Kruti Kanojia. “His life could have gone a very different way.”

While her background is in marketing, Kruti says Healthy Gamer was born out of her idea that she could package her husband’s hard-won expertise for the benefit of other gamers—and their parents. In addition to Healthy Gamer’s courses for parents of gamers ages 13 to 18, Alok also runs free online support groups for parents and for gamers 18 and older.

The mission, according to the Kanojias, is not to demonize gamers or to try to get them to quit altogether. It’s about learning to balance the virtual world with the real world—school, extracurriculars, friends, family, getting into college, finding a job.

Preaching abstinence from gaming “will only strain your relationship with your child,” Alok says in a video lecture explaining the healthy Gamer approach. “See your child as a partner in overcoming this problem. Let them have a say (though not the final say) in their gaming. Be a support system or a coach in their recovery efforts.”

The World Health Organization (WHO) added “gaming disorder” to its manual of psychiatric disorders in 2018, but the criteria are vague. It takes a year to determine whether someone’s gaming habits are extreme enough to qualify as a disorder, according to the WHO—and the American Psychiatric Association hasn’t even agreed that it is a disorder, deeming it instead a condition for further study. There is no consensus among mental health professionals on treatment, although there are plenty of private companies that offer untested programs, like so-called wilderness therapy—at upwards of $2,500 a week.

“Who has a year to wait for a diagnosis?” says Kruti. The way she and her husband see it, “If you think it’s a problem, it’s a problem.” If your child’s gaming is causing the child to disengage from friends and family, and hurting his or her grades, it’s a problem. “If it’s getting in the way of real life,” she says, “then it’s a problem.”

In his video lectures, Alok tells parents that it’s important to understand why their kids are drawn to video games—and which ones—and what their kids’ virtual identity means to them.

“No one has acne in a video game,” Alok says on Healthy Gamer. “No one’s voice is breaking… No one is bullied. How awesome is that?”

For kids who don’t fit in at school, who don’t excel at sports, the virtual world offers a community, a sense of safety, and a chance to compete—and win. “Gamers get to be exactly who they want to be,” Alok says.

Smart kids, especially boys, he says, are drawn to the challenge of the games, the opportunity to keep improving and moving to the next level without waiting for the rest of the class to catch up. “Games move at the pace of the gamer,” he says, unlike school, which “tends to move at the pace of the average student.” Games provide relief from boredom.

After providing parents with an understanding of why their kids are drawn to video games—why some kids love Fortnite while others are obsessed with World of Warcraft or League of Legends—Alok devotes a video lesson to a series of “action steps” aimed at creating healthy gamers:

Under the heading of “If all else fails,” Alok lists three activities he says are “universally great for gamers”: martial arts; starting a blog or photo project; anything to do with nature, from stargazing to whitewater rafting (especially appealing to adrenaline junkies who love Fortnite, an apocalyptic, multi-shooter game that has been described as a cross between Minecraft and Hunger Games).

Kruti Kanojia concedes that it’s an uphill fight. She says parents are going up against the corporate gaming behemoths who employ behavioral economists, psychologists, and all the latest technology to make their games irresistible. And they dangle prize money out there—a Fortnite tournament in July had $30 million at stake.

“We’re just trying to level the playing field,” she says.

Flummoxed by Your Family’s Fortnite Addict?

There are 3 comments on Flummoxed by Your Family’s Fortnite Addict?