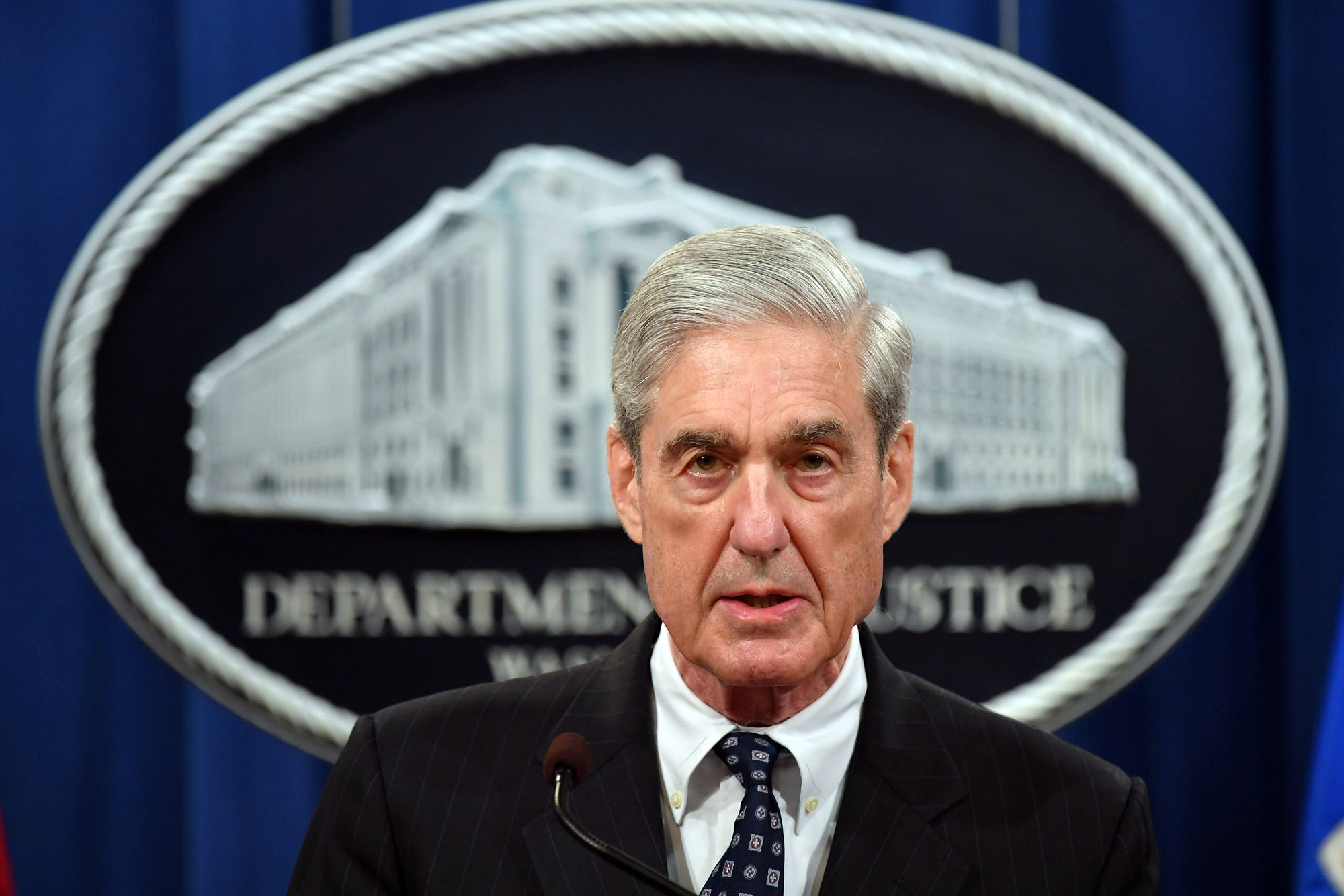 The closest thing to a nonfiction soap opera in America may be today’s long-awaited congressional testimony of former US Department of Justice special counsel Robert Mueller, who led a 22-month investigation into Russian meddling in the 2016 election. The plot twists so far:

Mueller issued his report (albeit with redactions) in April. Weighing in at a hefty 448 pages, it found no evidence that Donald Trump’s campaign collaborated with the Russians, but pointedly declined to exonerate Trump of obstruction of justice (for, among other examples, ordering Mueller’s firing, which the president’s staff refused to do). Then, Trump Attorney General William Barr’s summary of the report, before it became public, was criticized for sanitizing the obstruction concerns Mueller raised.

Then Mueller, who at his resignation press conference in May said his report should speak for itself, reluctantly bowed to a Democratic subpoena for his testimony at today’s hearings before the House Judiciary and Intelligence Committees. Will Mueller drop bombshells of new revelations or lay a nothing-new egg? (He has steadfastly maintained he doesn’t intend to speak beyond the findings of the report).

BU Today asked political scientists David Glick, a College of Arts & Sciences associate professor, and Maxwell Palmer, a CAS assistant professor—what to listen for in the hearings. They suggest five key issues that will likely determine how consequential Mueller’s testimony will be.

BU Today: Will Mueller provide any factual information that wasn’t in his report?

David Glick and Maxwell Palmer: Mueller is likely to be asked if there was anything that was left out of his investigation or his report, either by his own choice or due to interference from the Department of Justice. Additionally, he may be asked how he defined the scope of his investigation, any limits he faced in doing so, and how he decided which investigations to refer to other prosecutors.

We do not expect such questioning to reveal significant new information, given the thoroughness of the Mueller Report, along with confidentiality concerns. Some of the potentially most interesting investigative avenues that Congress will ask about will be those that Mueller either did not pursue or did not write up because they concern significant national security or counterintelligence issues, yet may not violate any US criminal laws. Mueller limited himself to a prosecutorial investigation, using prosecutorial standards. He is unlikely to speak to issues beyond that.

Will Mueller contradict Attorney General William Barr’s summary of the report and discuss that release process?

Just two days after Mueller submitted his report to the attorney general, Barr submitted a four-page letter to Congress summarizing the “principal conclusions” of the report. While the letter was an accurate summary of Mueller’s conclusions of law, it downplayed the magnitude and seriousness of Mueller’s findings and presented a more favorable view of President Trump than the report itself. President Trump claimed “No Collusion, No Obstruction, Complete and Total EXONERATION” based on this summary. Mueller objected to the accuracy of this summary in a letter to Barr because the summary understated the seriousness of President Trump’s actions, including numerous attempts to interfere with Mueller’s investigation. Mueller’s views of Barr’s actions regarding the release of the report will be especially interesting to Democrats considering further actions against Barr for his handling of the report.

Additionally, Mueller may face questions about how Barr and his staff redacted significant portions of the report before release to Congress and the public. While a few members of Congress have been able to read the full report without redactions, most have not. In Mueller’s view, are the redactions fair and necessary, to protect national security and ongoing investigations, or is important information about President Trump’s actions being withheld?

Will Mueller discuss his decision not to indict President Trump for obstruction of justice?﻿

One of the most important elements of the Mueller Report is Mueller’s decision not to recommend charges against the president for obstruction of justice. Mueller summarized the result:

“If we had confidence after a thorough investigation of the facts that the President clearly did not commit obstruction of justice, we would so state. Based on the facts and the applicable legal standards, however, we are unable to reach that judgment. The evidence we obtained about the President’s actions and intent presents difficult issues that prevent us from conclusively determining that no criminal conduct occurred. Accordingly, while this report does not conclude that the President committed a crime, it also does not exonerate him.”

Key to this decision are the “applicable legal standards,” mainly a Justice Department finding that sitting presidents cannot be indicted. Mueller decided that the president couldn’t be indicted, nor could his report say he would have been indicted but for his position. The latter is because, according to Mueller, it is unfair for prosecutors to assert that someone has committed a crime if that person cannot use the legal system to defend himself or herself. Mueller is likely to be asked many questions about his decision to follow these standards. We expect hypothetical questions to Mueller about what he would have done if presidents could be indicted. He will likely cite the principle above, and Democrats will try to find ways to get him to take a position, given all of these constraints.

Will the Democratic committee members be sharp, prepared, and organized? Will the Republican members’ questions and allegations, work or backfire?

The answers to some questions will depend as much on the questioners as on Mueller. His background and past statements suggest he is unlikely to give speeches or volunteer anything new and exciting. However, he is likely to provide good-faith answers to reasonable questions without evasions or misdirection. In past hearings, we have seen great variation in the skill, preparation, and organization of the questioners. Anyone who has watched these hearings or tried to give a five-minute presentation knows how fast five minutes go by. Will the Democratic members be individually and collectively prepared with cohesive sets of questions that elicit interesting responses? One thing that might work in their favor is that they have no incentive to seek out adversarial or “gotcha” moments with Mueller in the way they did with Barr and other administration officials.

Reporting suggests that Republican members of the committee are likely to spend more time challenging Mueller with conspiracy theories and claims of bias than with questions about the nuances of his report. It will be interesting to see how hectoring Mueller, attacking his credibility, and repeating the “witch hunt” mantra as if he were a less polished and reputable character like Michael Cohen will play out. It could work by muddying the waters and tapping into the same partisan polarization that such tactics have relied on in the past. However, it could backfire, given Mueller’s command of the facts and issues, his reputation, and the potential that he will respond to these claims with measured, grounded, and considered comments.

While Mueller’s testimony will receive substantial media attention, it is unlikely to alter the status quo, where a majority of members of Congress, as well as a majority of the American public, oppose impeaching the president. For Mueller’s testimony to have any effect, it would have to change the views of key House Democrats who currently oppose impeachment, including Speaker Nancy Pelosi and much of her leadership team. This seems unlikely, because we don’t expect Mueller to offer testimony not already contained in his report.

On the other hand, the same information previously contained in a 400-plus page legalistic report may reach many people as “new” information when it is shown on video and shareable on social media. It will be interesting to see if the media frames the recitation of information from the report as “dramatic and compelling” or as “nothing new.”

Robert Mueller’s testimony will be broadcast live on ABC, CBS, and NBC, along with cable news networks and C-SPAN3, starting at 8:30 am on Wednesday, July 24.