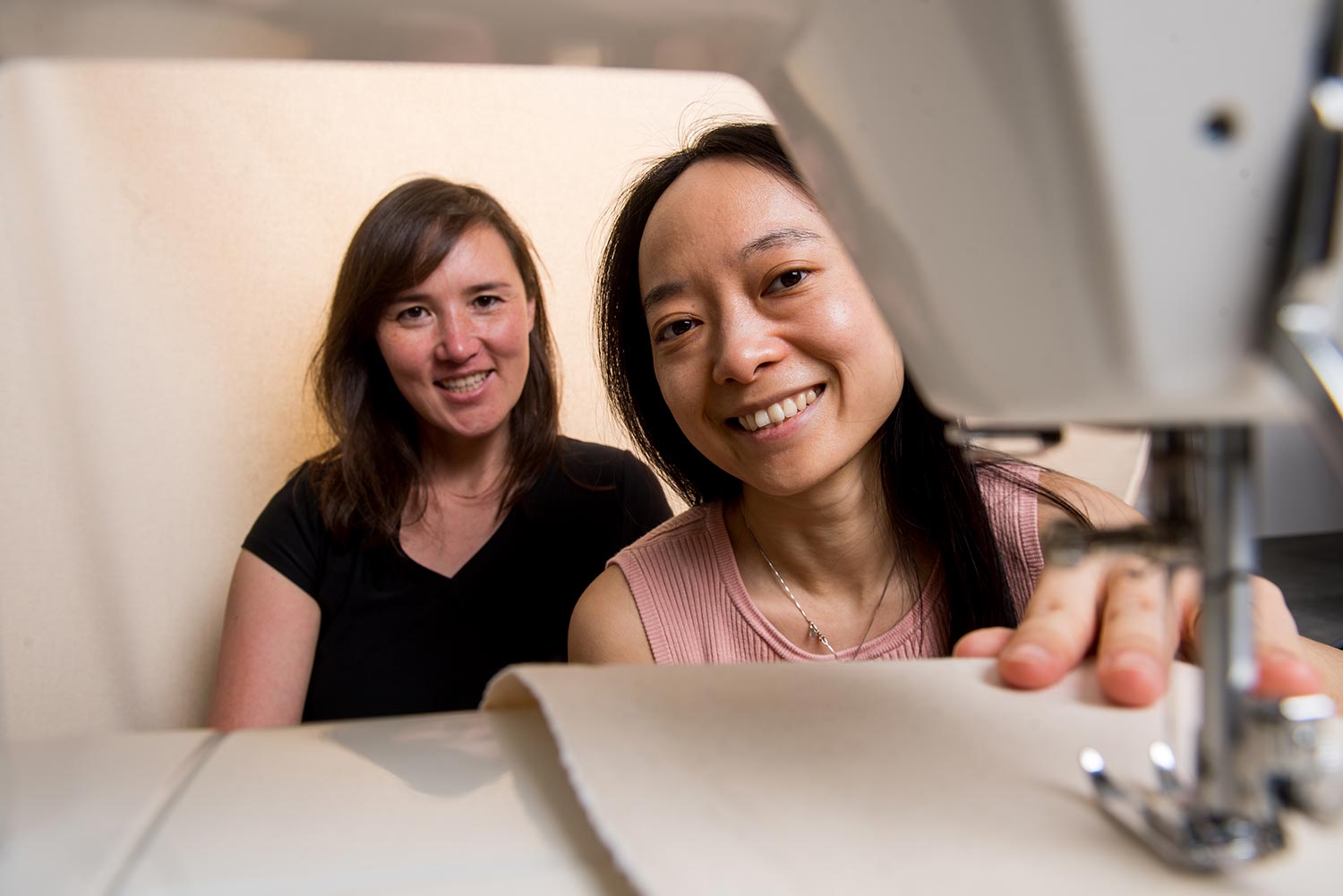 Computer scientists Emily Whiting (left) and Xiaoting Zhang envision their fabrication method to be as simple as sewing together patterns for a garment. Photo by Cydney Scott

Imagine trying to bring the irregularly shaped, cartoonesque objects from the pages of Dr. Seuss’ books to life. How would you do it? Curved, organic shapes and structures are difficult to create using traditional manufacturing methods—requiring the craftwork of designers, builders, or architects. But two Boston University computer scientists think that custom manufacturing should be more accessible to the average layperson. Now, they’ve combined computer science with a fabrication process known as fabric formwork, making it a whole lot easier to create large-scale custom shapes from scratch.

Emily Whiting, a BU College of Arts & Sciences assistant professor of computer science, and Xiaoting Zhang, a postdoctoral research fellow in Whiting’s lab, and collaborators from the Chinese University of Hong Kong, the National Institute for Research in Computer Science and Applied Mathematics (Inria), and Delft University of Technology, have developed a software algorithm that calculates how to cheaply and easily craft sculptural objects using just fabric, plaster, a sewing machine, and a little bit of patience. Their method makes use of the centuries-old technique of fabric formwork, which involves pouring casting fluid, like plaster or concrete, into a fabric casting mold that is suspended and supported by a rigid frame.

“We’re using the concept of static equilibrium and fabric mechanics to predict how fabric hangs and deforms under the pressure of casting fluid,” explains Whiting, director of BU’s Shape Lab.

Taking direction from their algorithm, Whiting and Zhang have used fabric formwork to create complex objects ranging from shapely chairs to a sculpture that looks like a giant rubber duck.

Yes, the research team made a plaster “rubber ducky,” and its existence could help revolutionize fabrication. They also published a paper about their work, Computational Design of Fabric Formwork, and presented their findings at SIGGRAPH, an international conference in computer graphics, on August 1, 2019.

“There is a lot of use for this in architecture, because [using fabric formworks] we are not limited to simple shapes,” says Zhang.

Casting objects in fabric requires less technological resources compared to 3-D printing, and it is a quicker process. (3-D printers can often take days to complete large objects.) Fabric formwork can also fabricate irregularly shaped objects that would be much too large for a standard 3-D printer to handle, according to Whiting.

From a design standpoint, fabric molds break through the architectural limitations associated with using traditional molds made of stiff plywood and other framing materials. Since the materials involved in making fabric molds are low-cost and widely accessible, the researchers hope to eventually apply their technique to large-scale architectural projects.

So, how exactly did Whiting and Zhang create an oversized plaster duck with a software algorithm? First, they imported the shape of the duck into their software. (Any computer model, online shape databases, or 3-D scans of physical objects can be used as an input.) The computer model is then translated, thanks to the algorithm’s careful calculations, into flat sections. Those sections determine the shape of the fabric panels that are sewn together to create a fabric mold. The software provides detailed instructions on how to assemble the fabric outlines and seam locations, where to attach external support strings, and then how to suspend the formwork from the strings within a rigid outer frame.

“We envision it to be similar to sewing patterns for garments,” says Whiting.

Every detail counts; the stretch of the fabric, the direction of the stitch, the seams, how the fabric is hung, how the fabric is secured to the frame. Whiting and Zhang devised a way to counteract sagging sections with additional supports, like taut strings connected between the mold and the rigid frame.

Once the fabric mold is situated, liquid casting material, like plaster, is poured into the openings of the formwork. The material cures, solidifies, and—voilà!—once the fabric is peeled away, you have yourself a one-of-a-kind object.

The voilà moment, however, didn’t come easy at first. It took about a year of developing and testing the software’s algorithm before the research team successfully created their first prototype, a sculptural shape known as the fertility model, made up of delicate curves representing a mother holding a child.

Although there are still minor kinks to work out (literally—Zhang is determined to have as few visible wrinkles as possible on the finished products), the researchers say their technique could revolutionize fabrication in remote locations, since the fabrics and frames are light and compact enough to be easily transported. They also hope the technique could be adopted by DIY crafters and designers to make custom objects right at home.

Taking the Pain out of Painting