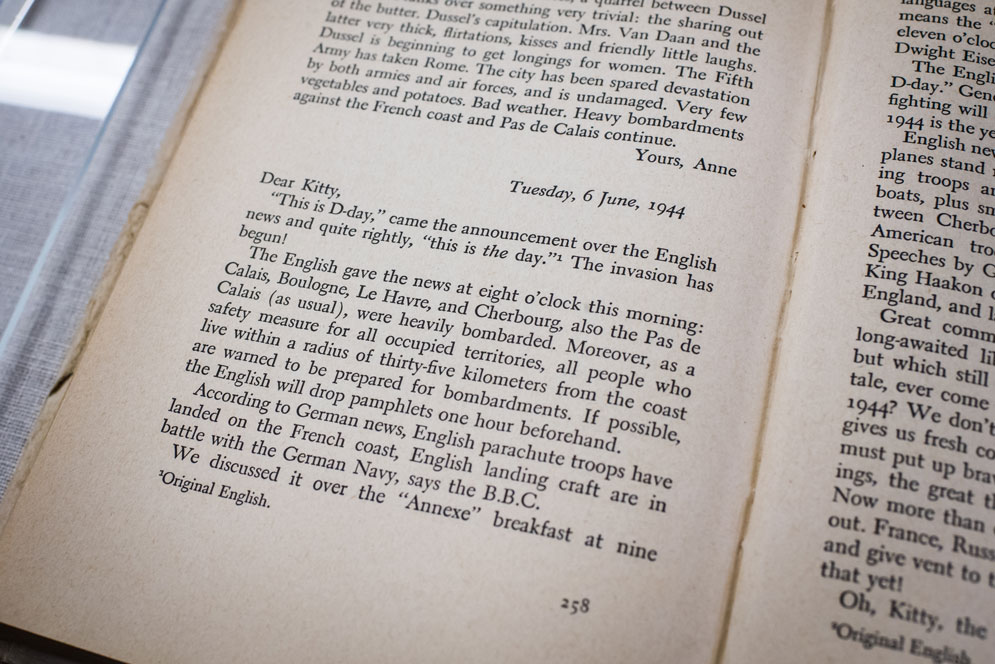 An edition of Anne Frank’s diary is among the items that recall the Holocaust, the subject of one exhibition in the International Museum of World War II.

EDITOR’S NOTE, Sept. 3: Since this story was published, the museum has closed following the sale of most of its collection to Ronald S. Lauder, head of the World Jewish Congress.

The faded uniform wasn’t draped on a mannequin 75 years ago, as it is now, but covered a paratrooper who dropped into Normandy the night before June 6, 1944—D-Day. He and others preceded the soldiers who waded onto five beaches the next morning in what would be the turning point of World War II. Today, the uniformed mannequin presides over vintage weapons of the type used in the invasion: a British rocket launcher, a Thompson submachine gun, a .45-caliber handgun, a knife, a set of brass knuckles.

That last one wasn’t regulation-issue. “I think that people carried these things because it made them feel tougher,” Kenneth Rendell speculates.

For two decades, Rendell’s International Museum of World War II in Natick, Mass. has been a window on the 76-year-old’s passion, showcasing 8,000 of the 50,000 wartime artifacts he has collected since leaving Metropolitan College, just shy of his degree, after four years of night school in the 1960s. (Asked why he bailed, he says, “Money—I had to earn it!”)

This year, the museum, which Rendell founded and directs, is augmenting its regular D-Day exhibition through December to commemorate the 75th anniversary. On that day in 1944, 156,000 US, British, and Canadian troops stormed ashore amid lethal German resistance and treacherous waters. The invasion succeeded, but at a huge cost: 4,400 Allied soldiers lost their lives.

Rendell is a world-renowned dealer of historical documents and letters and the author of books ranging from the war to the American West to forgery detection. In a case that garnered international headlines in 1983, he was among the experts who proved that diaries alleged to be Adolf Hitler’s were forgeries.

At BU, Rendell says, he studied business, not history. “I focused on things that I didn’t know about. I didn’t need somebody to teach me history.” He’d been a historical artifacts enthusiast since age 10, when a customer at his father’s drugstore near Harvard University paid his bill with an 1806 half dollar. Young Ken sold it to a coin dealer for $3.50.

Later, Rendell discovered the appeal of historical documents when he  attended the wedding of a friend who was a coin dealer. He traded an English coin collection for the groom’s stash of presidential letters. “Coins are nice,” he told Town and Country  in 2000, “but they’re cold compared to a letter, where you get the sense of a person.”

He collected many documents from World War II vets, the conflict a natural interest since it had been recent history during his childhood in Somerville, Mass., in the 1940s and ’50s. “Lots of men on my street were in World War II,” he says. “It was very real.”

Those looking for sunlight-flooded rooms with ornate exhibitions should steer clear of Natick. Rendell’s museum is a windowless one-story stone square, down a connector road from a congested retail strip. Its purpose is telegraphed only by the Howitzer hulking on the small lawn and the huge American flags hanging on the front of the building. The austere design is both pragmatic (things like windows would have cost a small fortune when he bought and renovated the building, Rendell says) and principled (he doesn’t want distractions from the exhibits).

“A real driving thing for me was that in the ’40s, I heard from soldiers how awful” the war had been, he says. “But by the ’50s, they had to remember it as glory, because if you continued to only react to the horrors, you couldn’t get on with life.”

His capturing what the war was really like prompted a former curator at England’s Imperial War Museum to say that Rendell’s museum “simply has no equal.” It greets more than 8,000 visitors annually, half of them student groups. Four days a week, it hosts these young people, teaching the war to those for whom it is ancient history. (The museum is open to the general public Fridays and Saturdays, from 9 am to 4 pm.)

Aside from D-Day items, the collection includes such treasures as the only known surviving MASH (Mobile Army Surgical Hospital) tent from the war; part of the fabric from the couch in Hitler’s bunker where he and his mistress, Eva Braun, killed themselves; the Fuhrer’s actual brownshirt uniform (nothing in the collection is a modern replica); and a chessboard and pieces made from rye bread by a prisoner at Auschwitz.

Education Director Susan Wilkins says the museum is one of the few in the world featuring all the key combatant nations, as well as both the home and the fighting fronts of World War II, which Rendell once dubbed “the biggest psychological drama of the 20th century.” D-Day’s contribution to the drama, he says, was the Allies’ massive fake-out of the Germans, whom they deceived into thinking that the invasion would target Pas-de-Calais, 180 miles up the French coast from Normandy.

Without the assault’s success, the European theater “would have been a stalemate,” Rendell believes. “If there was no D-Day, Germany could have sent all those divisions that were in France to Russia and tipped the balance,” where the Soviet Union had advantages over Hitler’s forces. “Hitler would have controlled occupied Europe—indefinitely.”

Chronologically, the D-Day exhibition begins with the decision to invade, reflected in a glass case with documents concerning that fateful call. There’s a British military letter recommending Normandy as the target, as well as two translations of Adolf Hitler’s intercepted orders—numbers 40 and 51—that the German military construct the Atlantic Wall, the 2,000 miles of fortresses, tank and gun stations, and other defenses along Europe’s north coast, installed to repel an anticipated Allied assault.

The exhibition also includes army and pilot uniforms—US, British, and French—and an example of the grappling hooks that boats fired atop the cliffs so that soldiers making land could scale them.

There are also two dolls, resembling mini-scarecrows, with small parachutes. They were decoys, Rendell says, dropped the night of June 5, “and they had fireworks on them that went off like guns to make the Germans think there was a landing in a completely different area.” The museum’s pair are among only a dozen surviving, he says, because they were left behind in England and weren’t destroyed on D-Day.

Three days after the attack, Supreme Allied Commander Dwight Eisenhower and German Field Marshal Erwin Rommel sent letters to their wives about D-Day. The letters, in a display case, reveal that Ike was cautious, writing, “Only time will tell how great our success will be. But all that can be done by human effort, intense devotion to duty, and courageous execution, all by thousands and thousands of individuals, will be done by this force.…They inspire me.”

Rommel was presciently grim: “We are doing what we can, but the enemy’s superiority in nearly all regards is overwhelming.”

The D-Day anniversary comes amid a wave of international anti-Semitism that makes the museum’s permanent Holocaust exhibition sadly topical.

“I hope that the way we deal with anti-Semitism shows what it leads to,” Rendell says. Wilkins notes that staff make a point of spotlighting for visitors the path between hatred of Jews and the Final Solution: “What the exhibits here show is…the incremental nature of anti-Semitism, until it becomes almost ordinary.”

Rendell quotes Albert Speer, Hitler’s armaments minister, as saying “he was not anti-Semitic. He said he was worse: he was indifferent.”