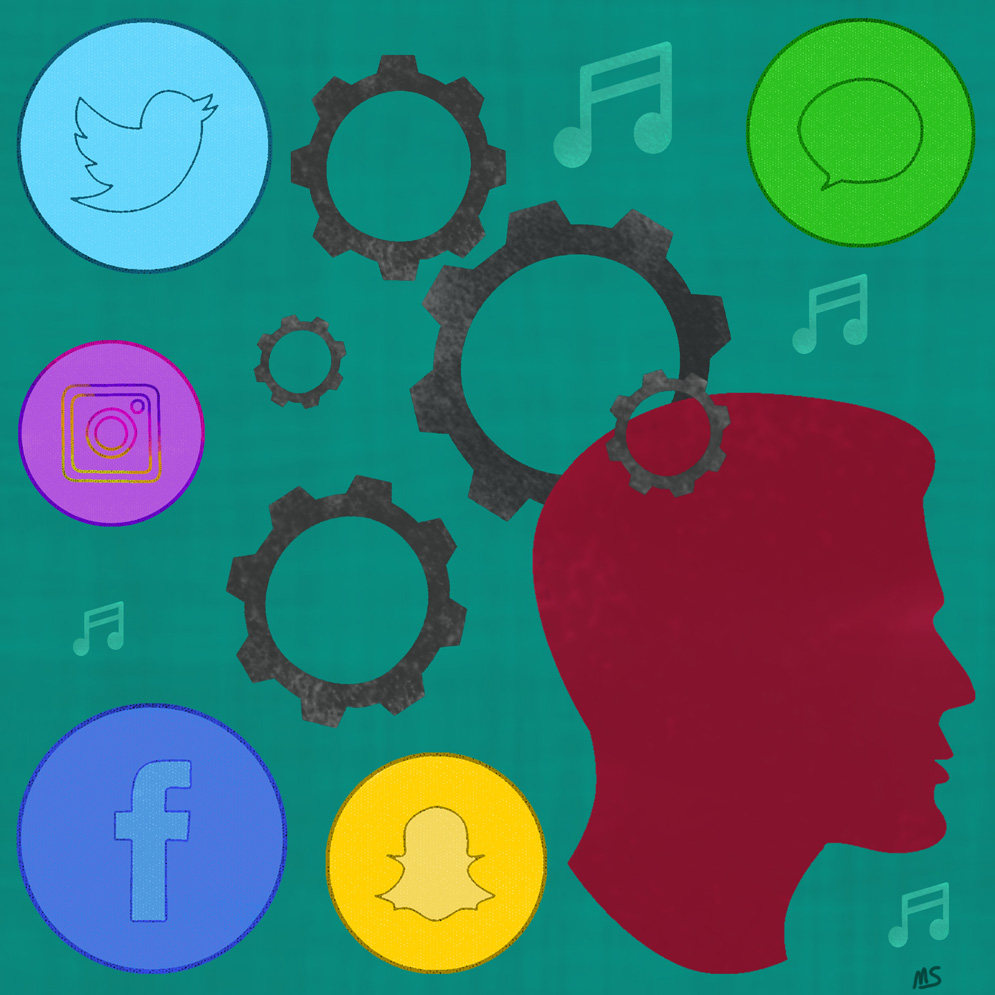 One of the toughest parts of a faculty member’s job is how to hold the attention of a roomful of multitasking millennials for 50 minutes—or 2½ hours. Some BU faculty weigh in on how they handle the issue. Illustration by Mara Sassoon

Be ruthlessly succinct. That’s Scott Schaus’ strategy for teaching undergraduates in the age of cell phones and short attention spans. “If you can’t convey an idea in three sentences,” says Schaus, a College of Arts & Sciences associate professor of chemistry, “they’re gone.” To supplement the quota, Schaus relies on pictures and graphics.

Carrie Preston bans cell phones and laptops altogether during her lectures and class discussions. The devices disrupt “friendly and fruitful exchange,” the CAS professor of English and women’s, gender, and sexuality studies explains in a tech note on her syllabi. Like many of her colleagues, Preston, Kilachand Honors College director, advises students to take notes by hand, citing pedagogical research showing that they’ll retain information better that way than by typing on their laptops.

Steve Ramirez throws relevant TED talks into his syllabi, the better to reach a TED talk–obsessed generation. He also makes use of Instagram, Snapchat, YouTube videos, references to popular movies and other pop culture—and an old-fashioned crowd pleaser called humor. The human connection still matters, says Ramirez (CAS’10), a CAS assistant professor of psychological and brain sciences. “I use personal storytelling,” he says. “I wear my vulnerability on my sleeve. I tell them my GREs were terrible, my grades were not a 4.0, I have immigrant parents. You can’t be a robot.”

These days even Silicon Valley types have taken to warning that technology and social media are hijacking not just our time, but our minds, too. The new year began with a flurry of articles in the news media offering the latest advice on how not to be distracted (“How to Actually, Truly Focus on What You’re Doing,” reads the headline on a recent New York Times “Smarter Living” column). We thought the new semester might be a good time to check in with faculty about one of the toughest parts of their jobs: how to hold the attention of a roomful of multitasking millennials for 50 minutes—or 2½ hours—when you’re competing with devices that alert students to every Instagram like, Snapchat message, text message, Facebook post—even the occasional phone call.

“You’ve got to pick a lane,” says Elizabeth Co, a CAS senior lecturer in biology and a 2018 Metcalf Teaching Award winner. “You’re either going to control the situation and ban the technology or you’re going to take the other lane and embrace the technology.”

Co takes the technology lane, turning students’ cell phones into teaching aids. She uses an app called Top Hat, which allows her to intersperse her lectures with questions that pop up on students’ phones. They tap out their answers, which appear on the large screen at the front of the room.

Co has all of her lectures recorded, so if students happen to check their devices or get otherwise distracted while she’s explaining the intricacies of, say, human physiology, they can go back and listen for what they missed. “The first thing is—don’t judge them,” she says. “We’re all distracted. I sit down to play with my kids and I’m eyeing the phone. My husband and I challenge each other to put away our phones.”

Muhammad Zaman, a College of Engineering professor of biomedical engineering and Howard Hughes Medical Institute Professor of Biomedical Engineering and International Health, is so convinced of the value of taking notes by hand that he doesn’t allow students to use laptops or tablets in class unless they bring a doctor’s note that they can’t write in their notebooks. “No one ever brings a doctor’s note,” Zaman says. For a two-hour class, there is a five to seven minute break, when students can do whatever they like, and that includes using their phones and laptops.

Regardless of which tack a professor chooses, Preston says, it’s important to set clear and strong rules about technology at the start of the semester. “As you all begin to trust each other and trust the course, it’s easier to allow technology in when relevant,” she says.

Besides, points out Preston, who has both a CAS Wisnewski Award for Excellence in Teaching and the University’s United Methodist Scholar/Teacher of the Year award under her belt, students are hardly the only ones multitasking on their devices while appearing to be listening to the person who has the floor. “We’ve all done it,” she says. “We’ll pull out our computers during a meeting and pretend to be taking notes.”

Eric Kolaczyk, a CAS professor of mathematics and statistics, sums up his strategy for teaching in the age of distraction with one word: engagement. He breaks up his lecture classes with group activities such as Q&A sessions among students. In courses where it’s practical, students engage in experiential learning and spend most of their time not just listening, but actively doing something. “No time for distractions,” Kolaczyk says.

When it comes to holding students’ attention, Malika Jeffries-El’s task would be daunting even without the ubiquitous presence of cell phones.

The CAS associate professor of chemistry teaches organic chemistry to 200 students—at 8 am. The class meets twice a week for 75 minutes. Like Co, Jeffries-El uses the Top Hat app to engage students via their phones. “I’m going to talk at you for 35 minutes, and then you’re going to whip out your phone and answer some questions,” she tells them. “I know they’re probably playing on their phones a little bit, looking at email, whatever.”

And when she does notice students, cruising Amazon on their phones while she’s trying to explain acids and bases, she doesn’t waste time getting angry. “You’re personalizing something that’s not personal,” she says.

Is it harder to get students to pay attention than it used to be? Yes and no, says Jeffries-El, a former associate professor at Iowa State University.

“I used to have a kid in my class at Iowa State who would sit in the back row and read the student paper,” she says. “The actual paper.”

There are 3 comments on Ban or Embrace: Professors Share Strategies for Cell Phones in Class