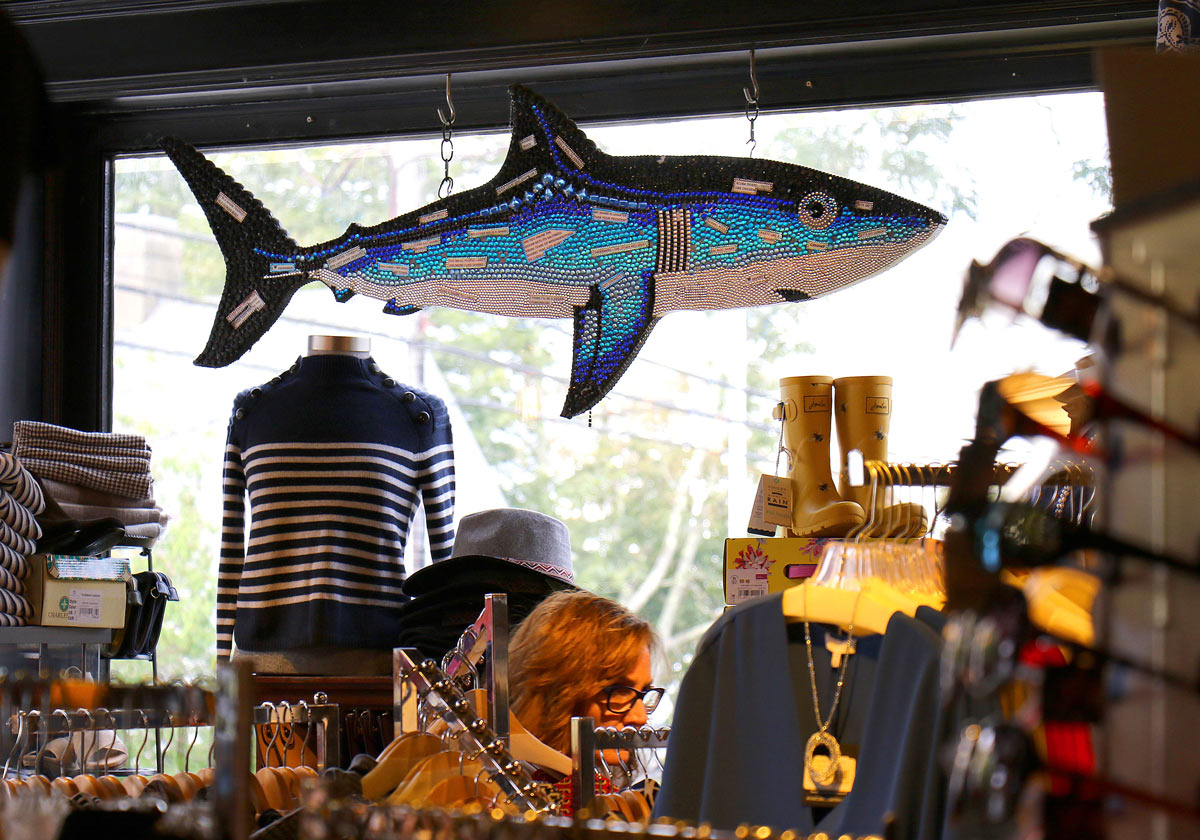 You’re more likely to be crushed by an office vending machine than to die by shark attack. But don’t bother Cape Cod tourism officials with trivia like that, as they’ve spent the past eight months hoping that the first fatal attack on their beaches since 1936 won’t scare swimmers, families, surfers, day-trippers, and summer renters into searching for alternative beach vacations.

In the days, weeks, and months after 26-year-old Arthur Medici of Revere, Mass., died last September from a great white shark attack at Newcomb Hollow Beach (and another swimmer was bitten off Truro in August), here is just a sampling of reactions: a celebrity surfer warned compatriots to hang-ten anywhere but the Cape; Medici’s aunt, and others, demanded a buoy-cum-sonar alert system at the beach where her nephew died; several beaches have been outfitted with tourniquet-stuffed trauma kits and extended lifeguard shifts; and the Boston Globe’s travel columnist suggested the Connecticut shore as an alternative to “the bloated, shark-happy Cape.”

Prior to last summer, shark-onomics had actually been driving up so-called shark tourism. Chatham merchants peddled T-shirts and tours to see the seals that are the sharks’ main fare. The nonprofit Atlantic White Shark Conservancy, which works to conserve white sharks, runs shark-watches. “In 2018,” says board member Cynthia Wigren, “we had more trips in the off-season that we’ve had in the past.” Wigren anticipates no drop in demand this year.

But the conservancy also provides shark safety info at its Chatham center and on its website. After all, if you’re a parent who lets your kids frolic in the waves at Longnook, Nauset, Head of the Meadow, or Race Point Beach, that proactive approach, BU experts say, is urgently necessary.

“Because shark attacks are emotionally evocative, tourists will probably overestimate the risk of experiencing” one, says Carey Morewedge, a Questrom School of Business professor of marketing and Everett W. Lord Distinguished Faculty Scholar. “And perhaps base their choice of vacation location on this kind of risk, while neglecting riskier kinds of activities that are less evocative, but even more dangerous—like the amount of driving they will do to get to their vacation.”

“Because shark attacks are emotionally evocative, tourists will probably overestimate the risk of experiencing” one.

Sharks have taken a toll on certain businesses, like surfing shops. At Wellfleet’s Sickday Surf Shop, co-owner Olaf Valli says sales of surfboards and accessories have fallen off. He’s still pushing ahead with a long-planned move to a new and bigger building, his declining board business partially offset by a new product for the reality of the 21st-century Cape: devices for surfers that use electromagnetic fields to repel sharks.

Earlier this month, the Cape Cod Chamber of Commerce convened businesspeople, scientists, and local politicians to discuss the issue. They’ll draft a plan to publicize beach technology safety, centralize FAQs for tourists about shark safety, and increase information-sharing by businesses and other organizations.

No one is expecting a dramatic drop-off for the summer destination, which in 2017 accounted for $1.2 billion, or 5.5 percent, of the $23 billion that travelers spent in Massachusetts. Chamber executive director Wendy Northcross notes that the Cape Cod National Seashore, with its array of recreations for those who aren’t swimmers, draws four million visitors annually. (The park posts shark-safety FAQs on its website.) Other communities that have seen sharks drive down tourism relied mostly on surfers, she says, who “are further out in the water and tend to show risk-averse behavior,” whereas “our visitor mix is quite different.”

Even for beachgoers at the Cape, Northcross says, one study found that 77 percent of them “never get their bathing suits wet.”

Still, hope doesn’t balance the books. Gary Sheffer, College of Communication Sandra R. Frazier Professor of the Practice of Public Relations, taps hands-on experience navigating a business-related health crisis in saying that Cape firms must get their arms around this problem. Now.

Sheffer was global head of General Electric’s communications in the early 2000s during the PR fallout from years of corporate dumping of suspected carcinogens in the Hudson River. A six-year river dredging wound up costing the company south of $2 billion, reinforcing what he calls a gospel truth of public relations: “Empathy first, then action in a crisis.”

“You’re not the mayor of Amity, just saying, “Everybody back in the water,” Sheffer says, referring to the negligent official of the fictional town in the 1975 movie Jaws. To Sheffer, empathy starts by ending sharks as a tourist attraction—coming so soon after Medici’s death, it would seem callous, he argues.

In Chatham, one local ritual, a Sharks in the Park auction of local artwork, will be renamed Art in the Park this year, says James Meyer (SHA’98), co-owner of the Captain’s House Inn. He and his wife have welcomed visitors to the town for 13 summers. 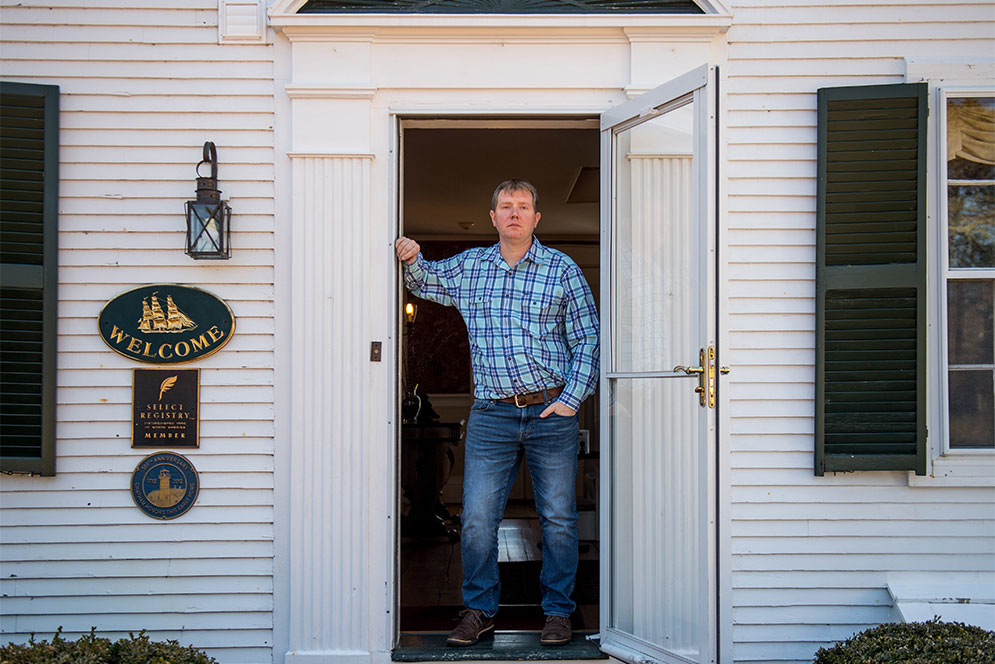 Cape Cod innkeeper James Meyer (SHA’98) has many nonswimmer customers, insulating his business, he says, from any drops because of recent shark attacks. Photo by Cydney Scott

Meyer’s early bookings for this summer have dipped slightly from last year, but he’s not worried, as most of his clientele are neither surfers nor swimmers—and his inn has a heated swimming pool. The chamber’s Northcross says construction of those may be the one shark-related growth industry going forward.

The Chamber of Commerce’s early April meeting reflected Sheffer’s second tip: rather than wait and see if more shark publicity drives business away, the PR expert urges businesses to answer potential customers’ frequently asked questions about sharks and the risks, via brochures, on their websites, by email, or by any means.

The Captain’s House Inn website suggests nearby nonaquatic activities; to the extent he’s fielded shark-related comments, Meyer says, they’ve been “more out of interest and curiosity than anxiety and fear.”

It’s another story, however, for surf shop owner Valli, who was shaken at a recent meeting when Australian colleagues reported their tourism plunged 40 percent after a single season with five shark incidents. “That’s dramatic,” Valli says. “Even if it’s 15 percent…it would be a dramatic change to the well-being of every year-rounder.”

Valli has some personal experience with sharks: two years ago, he says, he “was in there right next to him,” when a user was navigating on a paddleboard and a shark took a chunk out of the board. “I think a lot of us thought that we had a few more years before we actually had a real critical incident.” Then Medici died. “I am very concerned,” Valli says. He is pinning his hopes on Cape towns’ communication efforts, and he’s hopeful the beach kits will ease minds, too.

“There has to be something implemented to calm the nerves and just to show that we’re doing something,” he says.

Feeding people information can calm nerves, says Sheffer, who notes his own experience as a runner. An Arizona trail he’s jogged on issues brochures with information about rattlesnakes—what to do if you see one, and what to do if you’re bitten. “I still went running out on the trail,” he says.

Knowledge isn’t enough, however. Shark fears “are not reasonable or rational,” says Stefan G. Hofmann, a College of Arts & Sciences professor of psychological and brain sciences. “The fear of potentially dangerous animals, such as sharks, snakes, spiders, etc., is very common. It is likely a leftover from our evolutionary development, because it used to serve an important survival function.”

So Sheffer says Cape businesses should push local officials to take protective anti-shark measures. In brainstorming any such initiatives, businesspeople and public officials need to tread carefully. This semester, Sheffer asked his public affairs class about the Cape’s conundrum. Probably half of his students had vacationed there; even so, they were against a shark hunt, reflecting, Sheffer says, a broader social consensus “that preservation of these species is important….I would exhaust all solutions before I proposed a hunting program.”

His students thought they had those solutions. “They wanted to focus on technology,” Sheffer says, using things like drones and smart buoys, which monitor several hundred yards of open water with sonar rigged to identify sharks’ swim patterns, and relay information to an onshore communications center.

Whether any of those will swim off the drawing board is another question. A highly anticipated study by state and marine researchers of different strategies, from shark barriers to culling seals, won’t be out until after this summer.

There are 4 comments on Will Sharks Scare, or Attract, Cape Cod Tourists?