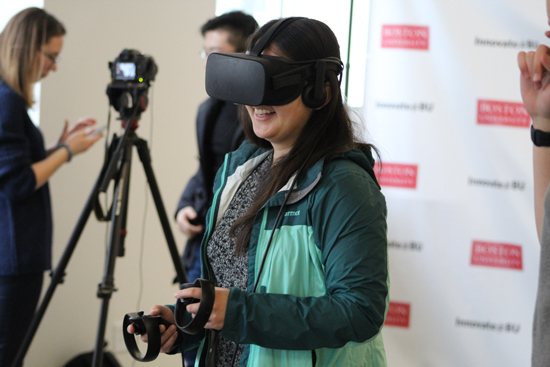 Explore virtual reality at the AR/VR Festival, one of more than 40 events happening over the 10 days of Innovation Week 2019. Photo courtesy of Innovate@BU

The school year is winding down, but the BUild Lab is buzzing. It’s the University’s second Innovation Week, a campus-wide celebration of new ideas and creative thinking, hosted by Innovate@BU. One big change from 2018 to 2019? More student-led innovation events this time around.

“Innovation happens in every discipline and at every level,” says Rouwenna Altemose (Questrom’18), Innovate@BU interim program director of business ventures and coordinator for Innovation Week 2019. “Sometimes that can be hard to see when the work is happening inside classrooms, labs, institutes, or clubs—it’s impossible to know what’s going on everywhere at BU. Innovation Week is a way to bring some of this amazing work forward and highlight it.

“Last year we learned that, when asked, people across the University want to share what they are doing to be creative and develop innovative solutions to challenges they see,” Altemose says. The first Innovation Week in April 2018 had over 25 unique events around campus, including tours through Boston’s cultural entrepreneurship centers, interactive performance theater workshops, a mini-hackathon bringing together graphic design and computer science students, a daylong AR/VR tech festival. And the first Innovate@BU Student Innovator of the Year, Michael Barros (Questrom’18), was chosen.

This year, the Innovate@BU team wanted to have more student-led events, as well as events from a more diverse set of disciplines. They are on track to achieve that goal: in the 10 days of Innovation Week 2019 there are 46 events scheduled, representing 13 BU schools and 6 campus initiatives, and 14 of them will be student-led.

The festivities officially began Saturday, April 20, with a PR Hackathon in the BUild Lab and InMotion Theatre’s 2019 production Sunlight Interior, which ran at CFA April 18 to 21. But the bulk of the events are this week.

One of Monday’s events is a lecture at the BUild Lab, 730 Comm Ave, called How Entrepreneurs Find Their Market: A Review of New BU Research by Siobhan O’Mahony, a Questrom professor of strategy and innovation, and Rebecca Karp, a Questrom lecturer, who will present their research on how 28 entrepreneurs in a digital health accelerator attempted to develop a market for their digital health innovations.

On Tuesday, April 23, members of the BU community can get a free tour of the Engineering Product Innovation Center (EPIC). BU’s on-campus student maker space is home to state-of-the-art tools and capabilities, including a 3D printer, a full machine shop, an automated robotic manufacturing line, a materials characterization laboratory, and much more. Email meepic@bu.edu to RSVP.

Stop by the BUild Lab on Wednesday, April 24, for Scaling Up: Women in Entrepreneurship, a conversation with seniors Emma Johnson (CGS, COM) of EmJohn Jewelry and Fiona Whittington (COM) of TechTogether Boston and the Bit. They will discuss how they started in entrepreneurship, what they are doing to expand women-run businesses and empowering women in the technology industry.

“It’s been exciting to see the different themes pop up from the events,” says Ahlea Isabella (MET’16), Innovate@BU marketing and communications manager. “This year, we’re seeing tons of events focused on food, from a sustainable food tasting to imperfect produce cooking demos to a workshop on food illustration.”

One of these food-themed events is FoodWASTED, on Wednesday evening at Fuller’s BU Pub, 225 Bay State Rd. A collaboration among the BUild Lab, imperfect produce supplier BRUZD Foods, and the anti–food waste app Food For All, this 21+ event aims to raise awareness about food waste by introducing local companies that have come up with innovative (and delicious) solutions to this problem. It should be an evening full of learning and tasty bites from Brewer’s Crackers and Toast Ale.

Interested in a career in the start-up industry? Come to the BUild Lab on Thursday, April 25, between 2 and 5 pm for the BU Startup Fair, hosted by the BU Entrepreneurs Club. Mingle with 20 for-profit and nonprofit companies and explore job and internship opportunities with inspiring start-ups in the Boston area for this summer or next semester.

Explore the intersection of innovation, arts, and technology with the I.M.P.A.C.T. Film & Art Festival at 6 pm on Thursday, April 25 at the BUild Lab. There will be a variety of art installations, live performances, and film screenings for the Innovate@BU Impact Film Competition. The night will end with a screening of the film Meow Wolf, the story of a group of artists in Santa Fe, N.M., who form a collective and find a profitable niche in the art industry.

Innovate@BU’s biggest event is Innovators Night on Friday, April 26, where students and alumni can come together to celebrate a year of hard work and new ideas. It’s also the grand finale of the annual New Venture Competition, a showcase of BU-led start-ups and social impact projects, where $64,000 will be awarded to six student-led ventures. The 2019 Summer Accelerator cohort, the Innovate@BU Student of the Year Award, and the Henry Morgan Award to a faculty or community member who has greatly contributed to BU’s innovation and entrepreneurship efforts will be announced as well.

Finally, Innovation Week 2019 will wrap up with the second annual AR/VR Festival on Monday, April 29, at noon, at the GSU Metcalf Ballroom. Hosted by the BU AR/VR Club, this expo provides an opportunity for students to interact with a variety of companies involved in augmented reality and virtual reality technology.

Innovation Week “is meant to help students, and the rest of us, see that no matter what you choose to do in life, you can be an innovator,” says Altemose. “And we need innovators with a wide range of skills and backgrounds to solve the world’s biggest problems and inspire others to think outside the box.”

Innovation Week events are happening across campus and the city of Boston from April 20 through Monday, April 29. Find the full schedule here. Many events are free and open to all attendees, but some may require RSVP or have an admission charge.