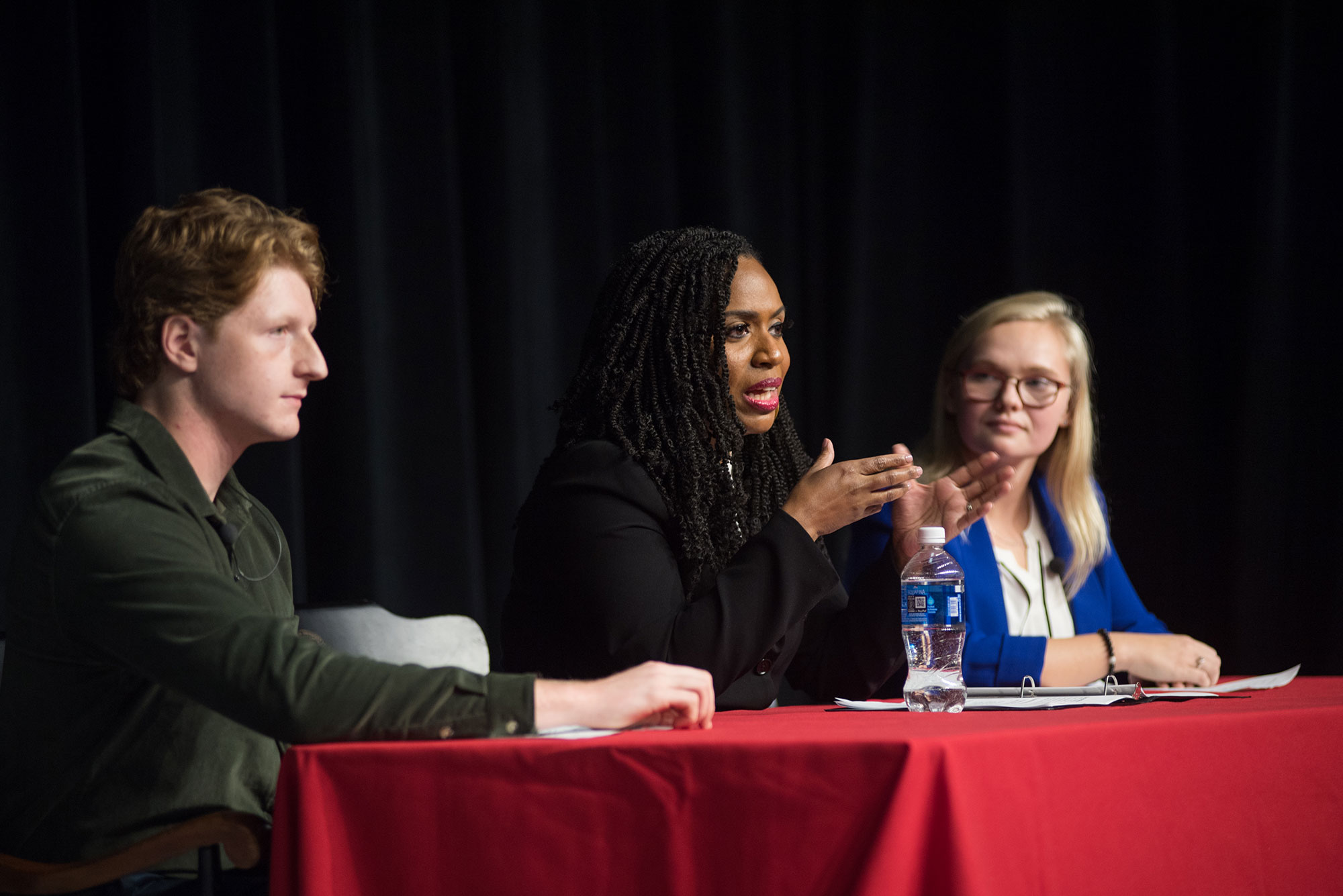 Massachusetts Congresswoman Ayanna Pressley (center): “BU invested in me.… I poured into it, and it poured into me.”

US Representative Ayanna Pressley, the candidate who upended Massachusetts’ political order a year ago and has become one of President Trump’s fiercest critics in Congress, told Boston University students Tuesday to “stand in your truth, lean in on it” and let it be a guide.

“Consider careers in public service,” Pressley (D-Mass.) said to a crowd of 200 students gathered at the George Sherman Union Conference Auditorium to hear her speak on Tuesday afternoon. “Your opportunity for service is not limited to being on the ballot, or who you cast a ballot for.”

The town hall event was hosted by the BU College Democrats on a day when voters around the country headed to the polls for state and municipal elections that could offer insights into the national mood a year before the 2020 presidential race. It was just a year ago that Pressley, then a Boston city councilor, defeated 10-term Congressman Michael Capuano (Hon.’09), also a Democrat, in a race that many said she couldn’t win.

Once in Washington, Pressley has continued to challenge the status quo, alongside Alexandria Ocasio-Cortez (CAS’11, Pardee’11) of New York, Ilhan Omar of Minnesota, and Rashida Tlaib of Michigan, four progressive women of color who were elected in 2018 and have become known as The Squad because of their unflagging criticism of Trump’s policies and practices, including his anti-immigration efforts. (On Wednesday, Pressley announced she was endorsing U.S. Senator Elizabeth Warren (D-Mass.) for president.)

When Trump described the impeachment process as a “lynching” in a morning tweet in October, Pressley could not stay quiet. “Haven’t even had coffee yet & the occupant of the WH, the bigoted man who called for the execution of the exonerated 5, is tossing the word ‘lynching’ around,” she tweeted. “Lord give me the strength to not take the bait but hold this man accountable for every single thing he says and does.”

Pressley told the BU crowd that the skepticism she heard when she ran against Capuano mirrored what she heard when she ran, successfully, for Boston City Council in 2009. When she talked about wanting to help teenage girls of color at a time when most discussions centered around the effects of violence on black and brown boys, the response was discouraging.

“People told me I should go run a nonprofit,” she said.

Pressley spoke for nearly an hour, answering student questions that had been collected prior to the event. (Her appearance came one day before First Lady Melania Trump will be in Boston to visit Boston Medical Center on Wednesday.) In her talk, Pressley touched on issues from key career decisions to the lack of diversity in the #MeToo movement to social media’s influence on politics. Dressed in black and wearing an “I believe Anita” button on her lapel (a reference to Anita Hill, who was vilified when she testified at the 1991 Senate confirmation hearings of Supreme Court nominee Clarence Hill that Hill had sexually harassed her when he was her supervisor at the US Department of Education), she saved her sharpest rhetoric for President Trump and the effort to impeach him.

His administration has rolled out “insults and assaults…by the hour,” Pressley said, and promoted misogynistic, xenophobic, and LGBTQ-hostile attitudes that degrade the nation’s highest office. Moreover, she added, the administration treats being poor as though it’s a character flaw.

“I did not run for Congress to impeach the occupant of this White House,” she said. But “not only do I think that [impeachment] is possible, I think it’s necessary.”

Pressley, who attended BU’s College of General Stuides for two years in the early 1990s, told the crowd that she is a survivor of a childhood rape as well as a campus sexual assault. She was raised in Chicago by an activist mother, and her father was in and out of jail for crimes associated with his opioid addiction. Although she did not graduate from BU, she said, it was a formative experience.

“BU invested in me, gave me a great scholarship package,” she said. “I poured into it, and it poured into me.”

Those experiences, as well as being an aide for former US Representative Joe Kennedy II (D-Mass.) and later an aide for 11 years for US Senator John Kerry (D-Mass.) (Hon.’05), helped shape her career. For example, the #MeToo movement, she said, was not inclusive, so she introduced a sweeping sexual harassment bill with US Representative Katherine Clark (D-Mass.) that aims to stop workplace inequalities and mistreatment and violence against often overlooked populations, like domestic workers and day laborers.

Archelle Thelemaque (COM’20) was one of more than 80 students who lined up to have a photo taken with Pressley at the end of the event. She said she admires Pressley’s steadfastness when it comes to her priorities.

“She is unwavering,” Thelemaque said. “Every time I hear her, I come away with a new piece of information that resonates with me deeply as a black woman.”

Political science major Faith Rynda (CGS’20, CAS’22) said she hopes to intern for Pressley. Unlike politicians who change once they make it into office, she said, or try to fit in with the traditional crowd, Pressley is “creating space” for new ideas about what politics can be and what it means to hold office.

“It proves to me that things are going to change,” said Rynda. “And that, yes, you can find that space.”

There are 2 comments on Ayanna Pressley Tells BU Students: “Stand in Your Truth”