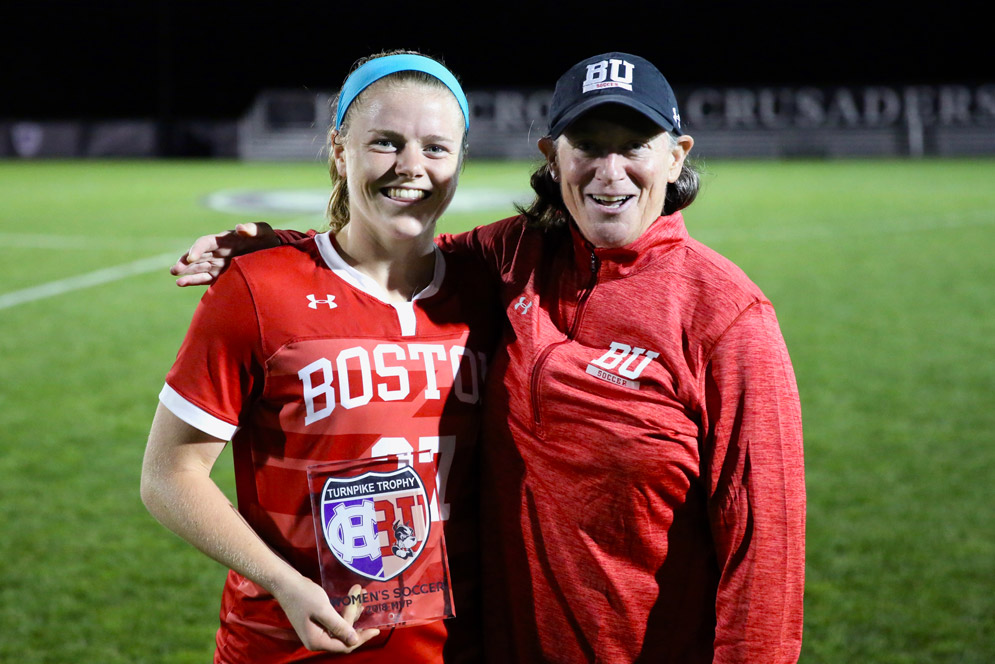 When forward McKenna Doyle (Questrom’19) secured the women’s soccer team 3-0 win over Holy Cross Wednesday night with a tough-angled goal, there was plenty to celebrate. The Terriers had soundly beaten their Turnpike Trophy rival and the win marked the program’s 300th victory. It was a moment to savor, not only for the players, but for Nancy Feldman, who as head coach has led the team throughout its 24 seasons as a varsity sport.

(The Turnpike Trophy competition was created by BU and Holy Cross in 2015. The athletic series between the two Patriot League rivals spans several varsity sports.)

“What a terrific night and game for our 2018 team to put together a full and complete effort to get to 300 wins in program history,” Feldman says. “They continue to represent the standards and values of the culture both on and off the field that was created and cultivated during the last 24 years by our BU women’s soccer alumnae.”

The soccer program, and Feldman, had 297 wins as the 2018 season began, and although a tough nonconference schedule delayed the milestone achievement, the start of Patriot League play (3-0-1) made it inevitable. Over the program’s 24 seasons, the Terriers have claimed 12 conference regular season and tournament titles and made 13 trips to the NCAA Tournament. Feldman has been recognized with 10 Conference Coach of the Year Awards.

“Our women’s soccer program has been a great source of pride within our department for nearly a quarter-century. Coach Feldman and her early BU teams quickly set a standard of excellence here, and their success over the years speaks for itself,” says Drew Marrochello, assistant VP and director of Athletics. “Milestones are great, but I know for a fact that Coach Feldman and this year’s squad are just as focused on win number 301.”

Earlier this season, Feldman was asked about reaching the 300 benchmark. She was quick to deflect the attention. “It means nothing because right now I’m only in the moment of this season,” she told BU Today. “As a team and as a coach, I’m only as good as my last game. I’m gonna coach—I’m gonna do everything I can to do my part to coach us to be getting the next win. That’s the only thing on my mind, truly.”

The longtime head coach and her Terriers now hold an all-time record of 300-150-46 (.651). Feldman’s longevity and success were nationally recognized last season when the United Soccer Coaches awarded her the Bill Jeffrey College Long-Term Service Award.

“She’s the one who’s brought this program to varsity level, and someone’s who’s been here for these many years deserves so much credit,” Doyle says. “She’s built this program up, and it still continues to deliver every day.”

Prior to arriving at BU, Feldman served two seasons at Lake Forest College and five at Plymouth State University and is approaching her 400th NCAA career win, a milestone that only 10 other coaches have reached.

Her players say that what defines their coach, known for her passion and intensity, is her genuine care for her players’ success and well-being. “You can see the emotions in her every game, and she cares just as much as we do,” says Turnpike Trophy MVP Anna Heilferty (CAS’21).

“As you get older, you realize how much work Coach puts in behind the scenes. She really puts everything into everything that we do, and really cares about us immensely,” tri-captain Dorrie Varley-Barrett (CGS’17, Sargent’19) says. “There’s no one more deserving.”

The BU women’s soccer team hosts Lafayette on Saturday, September 29, at 1 pm, at Nickerson Field, 285 Babcock St. Tickets are free for students with a sports pass, $3 for faculty, staff, and students without a sports pass, and $5 for the general public. The Patriot League Network will broadcast the game live.