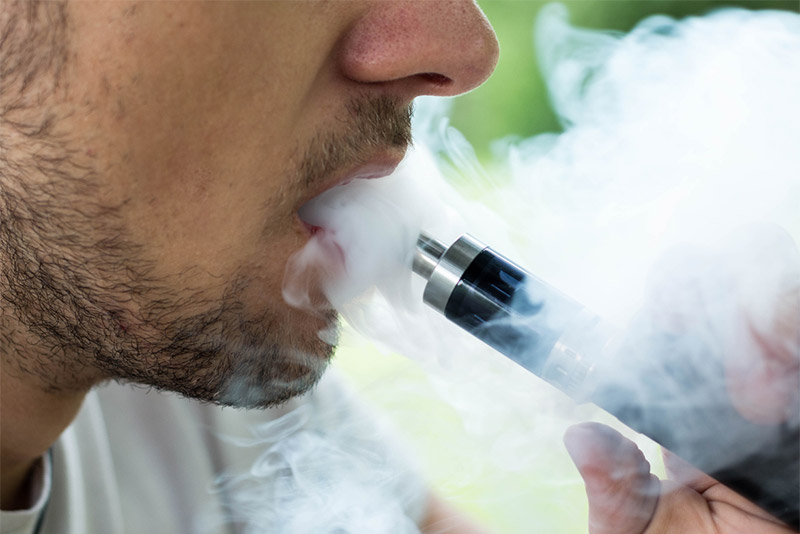 “If you’re using electronic cigarettes, or ‘vaping’, instead of smoking cigarettes, you’re fooling yourself if you think it’s a healthier option,” with regard to wound healing, says Jeffrey Spiegel, a Boston University School of Medicine professor of otolaryngology, head and neck surgery, and chief of Facial Plastic and Reconstructive Surgery at Boston Medical Center.

Spiegel is the senior author on a new study, published October 18, 2018, in JAMA Facial Plastic Surgery, that found that electronic cigarettes have virtually the same negative consequences for wound healing as traditional cigarettes. Although electronic cigarettes or “e-cigarettes” have been marketed as a safer alternative to cigarettes, Spiegel says those claims are largely lacking in scientific data.

It’s long been known that traditional cigarettes greatly reduce the body’s ability to repair wounds. Nicotine restricts blood vessels, reducing blood flow to skin and tissues. At the same time, it also increases the degree to which blood platelets, which play a role in clotting, tend to clump together.

As a result, blood circulation is reduced, especially to small microvessels found in the skin, making it much harder for the body to repair injuries.

Although e-cigarettes don’t contain tobacco, they do contain nicotine and other chemicals. To find out the effects of e-cigarettes on wound healing, Spiegel teamed up with BU School of Medicine otolaryngology resident Chelsea Troiano, who applied for and received funding from the American Academy of Facial Plastic and Reconstructive Surgery. Troiano is the first author on the new paper.

Studying how well skin flaps were able to heal in rodents over the course of one month, Spiegel and Troiano found that 30 minutes a day of exposure to traditional cigarette smoke versus e-cigarette vapors was nearly identical in slowing down wound healing. After 30 days, there was substantially more tissue death in rodents that had been exposed to cigarettes and e-cigarettes when compared with rodents who had been in a smoke-free environment.

Spiegel says the effects of vaping an electronic cigarette cartridge a day is “as bad for wound healing as smoking a pack of cigarettes a day.”

Ordinarily, to protect the body’s ability to recover, surgeons have warned patients to abstain from smoking cigarettes for a month leading up to elective surgeries and to remain smoke-free afterwards. Now, Spiegel’s research shows that surgeons must also carefully discuss e-cigarette use with patients and the impact it can have on wound healing.

What’s more, the study hints at larger implications for how e-cigarettes disrupt the body’s ability to self-repair and stave off disease.

“Wound healing is certainly very important with regard to surgery,” but it’s also very important in “repairing small levels of injury” the body experiences every day, Spiegel warns. Electronic cigarette users are essentially “suffocating the body’s tissues so that they can’t heal well, setting up for a bad situation.”

Vaping Slows Wound Healing Just as Much as Smoking