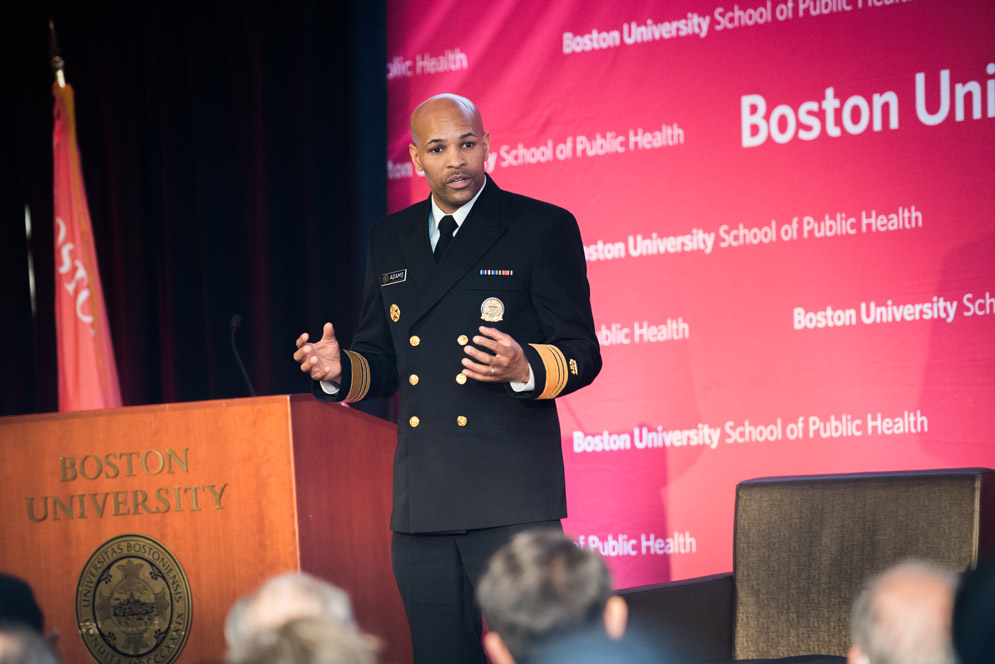 Jerome M. Adams, the US surgeon general,speaking at a School of Public Health Dean’s Seminar on the nation’s opioid crisis on January 25.

Before a standing-room-only crowd at the Medical Campus last Thursday, Jerome M. Adams, US surgeon general, drove home the severity of the opioid crisis with a simple question.

“Raising your hand, how many of you know someone who is suffering from an opioid use disorder?” he asked.

Almost everyone in the room raised their hands—including Adams. “My little brother, Phillip, is in state prison right now, suffering from a still-untreated substance use disorder,” he said. “Addiction touches each and every one of us. No one is spared, black, white, rich, poor, urban, or rural.”

A vice admiral in the US Public Health Service, Adams was the headliner at the School of Public Health Dean’s Seminar The Opioid Crisis in America: A Conversation with the US Surgeon General. In addition to the overflow crowd of 400, another 500 were live-streaming the event.

The opioid epidemic has become one of the nation’s most pressing public health issues. According to the Centers for Disease Control and Prevention (CDC), drug overdose deaths in the United States have increased more than sixfold since 1980, and overdose is now the fourth leading cause of death overall, behind only heart disease, cancer, and chronic lower respiratory disease.

An epidemic that affects everyone will take everyone to beat it, Adams said, from scientists to law enforcement to local community leaders. “We must mount a robust response, but we can’t do it alone.”

To illustrate the importance of these partnerships, he shared his experience as Indiana’s health commissioner, when he presided over the state’s efforts to deal with an unprecedented HIV outbreak driven by needle drug use in Scott County. To tackle the outbreak, Adams first reached out to county faith leaders, the area Chamber of Commerce, and the local chief of police, seeking support for evidence-based, proven methods of prevention and treatment. “Science is what we know to be true, and policy is what we can convince the public to accept,” he said, and to bridge that gap, partnerships like this are vital.

The strategy worked, and to the surprise of many, the public “in conservative Indiana” even accepted a syringe exchange program, a proven method for stemming HIV transmission, but often not supported by public opinion.

Adams also warned against putting the newest and best methods into place only in those communities where they are easiest to implement. “I’m concerned that we are at times setting ourselves up to worsen disparities when we only allow the preventions we know to be effective to be applied to certain communities,” he said. Putting these strategies into place in communities with fewer resources and more distrust is worth the challenge, he said, but takes partnerships to build support.

Also speaking at the seminar was Monica Bharel (CAS’94, MED’94), Massachusetts public health commissioner, who said that the gap between science and policy is driven by stigma, and is especially apparent in the limited availability of proven treatment. “It’s very hard to expand the opportunity for treatment, because people don’t want these places in their backyard,” Bharel said of the critical shortage of treatment centers.

She noted that only one third of treatment centers use medications like methadone. “If someone presents with a nonfatal overdose, and they get started on either buprenorphine or methadone, their risk of fatal overdose goes down by 50 percent,” she said. “Just imagine if that was a chemotherapy or a blood pressure drug. Everyone would have it, and we would all be using it.”

Jonathan Woodson, Larz Anderson Professor in Management at the Questrom School of Business and director of BU’s Institute for Health System Innovation and Policy, an event cosponsor, moderated a discussion between Adams and Bharel that focused on actionable steps to combat the epidemic. Discussing how the public can get more involved, the two public health experts stressed the importance of increasing public access to naloxone, the overdose-reversing medicine also known by the brand name Narcan. Massachusetts has ramped up both availability and training, Bharel said, and bystanders have already saved thousands of lives.

Bharel and Adams then demonstrated use of naloxone on stage with a training kit that sprays water. “I’m not going to squirt water up your nose,” Bharel assured Adams, eliciting laughter from the audience.

Holding up the spray, she told the crowd that those undergoing bystander training are given two doses. She then proceeded to show how easy it is to apply the spray. “So, someone is down,” she said, “you understand they’re nonresponsive, you think it’s an opportunity to use naloxone, and you just”—she sent a small cloud of mist up in front of the stage.

Every nonfatal overdose, Adams said, is an opportunity to connect someone with treatment. Those who interact with people with opioid use disorders need to work together toward that aim, from primary care physicians to the criminal justice system to those providing services for people who are homeless. “We have to make it easier to get help than to get high,” he said.

He said that also means providing “wrap-around services” for people struggling with addiction. “One of the things that we’re working on at the federal level is to be more permissive with Medicaid waivers, so folks can provide not just addiction treatment in the traditional sense,” he said, “but an expanded definition of treatment that includes peer recovery coaches, housing, job training, and all of the things that we know are critical components of success, and that we know if they are not provided will increase the chances of relapse.”

Adams ended the seminar on a hopeful note. Ultimately, he said, the key to advancing against the opioid epidemic is to amass more evidence of what contributes to successful recovery and then to put that evidence to work in the form of policy.

“We need to fight for good, evidence-based programs and show communities how they can incorporate them. If we do that, we will get where we need to be. I’m convinced of it.”