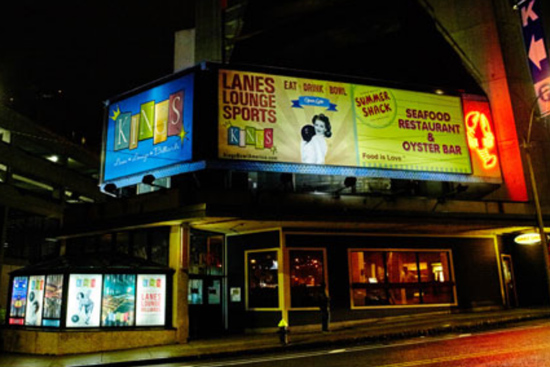 What does Sesame Street’s Oscar the Grouch live in? How many games are in the World Series? Which art museum is the most visited in the world?

If you know the answers to those questions and consider yourself a whiz at answering similar questions, head over to Kings Dining & Entertainment tonight. The Back Bay bowling-alley-turned-adult-playground hosts its weekly Tuesday Stump! Trivia night starting at 7 pm.

Kings Back Bay began as a bowling alley in 2002. Today the chain has nearly a dozen locations across the country (including one in the Boston Seaport), with more on the way, and has expanded to become a one-stop entertainment center offering craft cocktails, fine dining, and table games. On the extensive menu are Buffalo chicken wontons, nachos, and steak tips, platters (for sharing), and a selection of burgers, pizzas, and tacos.

Tonight, teams of two to six players will compete for prizes in a boisterous battle of the minds. Once a winner is crowned, plan to stay for all-you-can-play 10-pin bowling and table games like air hockey, billiards, shuffleboard, and Skee-Ball, starting at 9 pm. Kings Back Bay has 16 bowling lanes, 3 full-service bars, HD televisions, and even some nostalgic arcade games like Pac-Man. It’s open until 1 am, so you’ll have a chance to sample all of it.

And don’t be surprised if you run into a celebrity or two while you’re there. Well-known athletes Tom Brady and Marcus Smart as well as musicians like Trisha Yearwood and Garth Brooks, to name a couple, are among the boldface names who have been spotted at local Kings.

Tuesday Trivia Night is popular, so it’s best to make a reservation. RSVP here and be sure to mention “trivia” in the comment section.

Kings Dining & Entertainment Back Bay is at 50 Dalton Street, Boston, near the Prudential Center. Take an MBTA Green Line trolley to Hynes Convention Center. Note: Kings is 21+ after 10 pm.

Tuesday Is Trivia Night at Kings Dining & Entertainment
0
share this