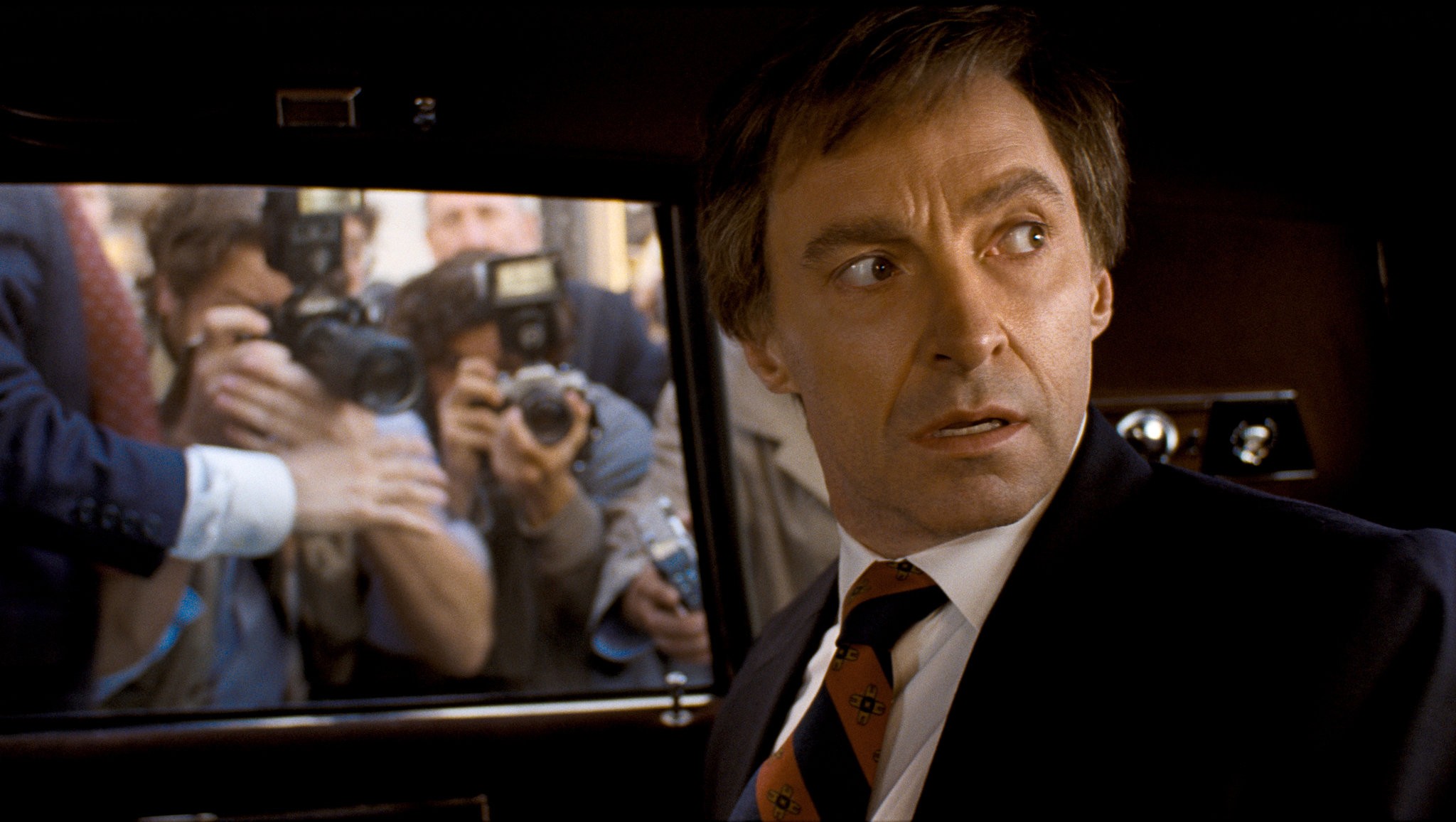 The Front Runner, one of the most anticipated movies of the fall season, opens nationwide this week—and one of the leading characters in the true story of the short-lived 1988 presidential campaign of Senator Gary Hart (D-Colo.) and the sex scandal that torpedoed his political ambitions is Thomas Fiedler, dean of the College of Communication.

Starring Hugh Jackman as Hart, the movie chronicles how the senator, then the front-runner for the Democratic nomination, was forced to withdraw after the press (with Fiedler leading the way) uncovered evidence of his extramarital relationship with a young woman, Donna Rice (the two have always maintained that their relationship was not sexual).

Rumors of Hart’s troubled marriage and alleged infidelity had been swirling among the press corps, but it wasn’t until veteran Miami Herald reporter Fiedler (COM’71) received an anonymous call that Hart was having an affair with Rice and followed up on the tip by going to Washington to confront the candidate that the story became front page news. Just prior to Fiedler’s story, Hart had challenged a New York Times reporter to prove he was being deceitful, saying:  “If anybody wants to put a tail on me, go ahead. They’d be very bored.”

They did put that tail on him. And they were not bored.

It was the first time in history a presidential campaign ended because of a sex scandal, and Fiedler’s reporting proved to be a turning point for how journalists cover politicians.

Fiedler was recently invited by Front Runner director Jason Reitman to a private screening of the film. He is portrayed in the movie by actor Steve Zissis, best known for his work in the HBO series Togetherness.

BU Today spoke with Fiedler about what it was like to see himself portrayed on the big screen and what The Front Runner did—and didn’t—get right.

BU Today: You’ve seen the film. What was it like seeing yourself played by an actor?

Fiedler: It was truly an out-of-body experience. The character who bears my name looks and behaves in ways that I certainly don’t think resemble me, either physically or journalistically. For example, the film character has a full, black beard, which I have never had. He’s also disheveled (the New York Times critic describes him as “slovenly”) and generally clueless about what’s going on much of the time. I don’t think it’s a conceit on my part to say that I’m fairly neat in my appearance (military school, after all), and I was awarded the Society of Professional Journalists’ top award for my coverage of the 1988 campaign.

What marks would you give Steve Zissis, the actor who portrayed you?

I’m not sure I know the right basis on which to grade him. If the grade was to be based on his ability to simulate me, I’d have to give him an F. But the film’s director, Jason Reitman, told me that Zissis’ assignment was to contribute to the film’s narrative arc and its central question, which is whether the Hart story changed forever the way campaigns are run and the way journalists perceive candidates. And Zissis portrayed me as the villain of the narrative, the bottom-feeding tabloid reporter who was happy to break the unwritten rules. To my dismay, he played that role well.

What did the film get wrong, in addition to its portrayal of you?

Many things certainly weren’t as accurate as we’d expect from a documentary film. But I suppose we must give Hollywood broad latitude when it deals with historic events, and this film takes full advantage of that latitude. To me, the most glaring factual error was the way my character handles the phone call from my tipster, a young woman friend of Donna Rice’s. In the film, my character hangs up on her before she provides any information. In fact, I had two long and delicate conversations with her and was successful in obtaining the information we needed to verify the tip and ultimately confront Senator Hart that fateful night in Washington, D.C.

Did watching the film bring back any particular memories for you?

I credit the director and cast with capturing the frenetic activity and the larger-than-life personalities that are part of a presidential campaign. The cinematography and location shooting ring true. That said, because of the liberties the film takes with the facts as I lived them, most of the memories that came back to me were in the form of objections to the film’s storytelling.

Can you briefly describe how you became aware of Hart’s alleged affair, starting with the anonymous phone call you received?

The ignition point of the story was a phone call to me by a woman who called to object to a column I had written that questioned the journalistic ethics of those who were hinting in stories about Hart’s philandering without having any verification. The caller tried to sell me a photo that she said would prove that Hart was having an affair with her friend. That photo turned out to be the iconic one of Donna Rice sitting on Hart’s lap on the end of a pier. They are both wearing tee shirts and shorts, and the tee shirts have the words “Monkey Business” on the front, the name of the yacht on which they overnighted in Bimini. I refused to buy the photos, but the caller provided me the information that proved sufficient for me and my colleagues to feel the need to pursue the tip about this affair. Hart had been publicly denying that he was a “womanizer” and he had invited scrutiny. So we followed that tip (a story in itself) to Washington, D.C., where I had been told the Miami woman would spend the weekend with Hart at his DC townhouse. Of course, we were able to verify what we had been told, and we wrote the fateful story.

When you confronted Hart, what occurred?

The confrontation was extremely tense, as would be expected. Hart was defensive and evasive. But a key question was whether the Miami woman had a role in his campaign. He said no, that she was a friend. Had he said that she was indeed a campaign staffer, we likely wouldn’t have run the story, because there would be a legitimate reason for a staffer to be visiting him in DC (though we would have known he was lying). In a sense, he fell into a trap and just happened to tell the truth. When Jim McGee, another Miami Herald reporter, asked Hart if he was having an affair with this woman, Hart cut off the interview and went inside his townhouse. It was a pure holy-shit moment.

Hart and Donna Rice have steadfastly denied they had a physical relationship. Your reaction?

Of course they would deny that. My role wasn’t to prove otherwise, only to report that amid allegations that he was a “womanizer,” Hart invited a beautiful young woman to spend the weekend with him. And, coincidentally, this was the same woman with whom he’d sailed to Bimini for an overnight. What they did during those nights is anybody’s guess…

This was the first time a presidential campaign was ended over a sex scandal. Many have described it as a watershed moment in American politics. Do you agree?

I have always believed that this story was the result of an evolutionary process in the way that journalists covered politicians. Watergate certainly changed things in a much more profound way. The era when journalists would remain silent after learning that a political figure was lying—that is, saying one thing in public and behaving in the opposite way in private—were long gone by the time the Miami Herald encountered Gary Hart. What perhaps was new is that this happened on such a big media stage, a presidential campaign of the front-running candidate. Our story put a spotlight on the change in the way reporters behaved, but it wasn’t an epochal change.

Many political pundits have argued that the way presidential candidates are covered in the wake of Hart’s downfall made it possible for someone like Donald Trump to get elected. Do you agree?

That seems to me to be inherently contradictory. The big difference between the public’s reaction to Gary Hart’s philandering and Donald Trump’s is that Hart was misbehaving in that moment, at the height of a campaign when the focus was on him. It was supreme recklessness. Others who have followed, notably Clinton and Trump, at least could claim that their bad behavior had occurred in the distant past (the exception being Monica Lewinsky).

Some of your journalism colleagues decried your tactics at the time. The New York Times’ Anthony Lewis said he felt “degraded” by his profession after reading your story, and A. M. Rosenthal, also of the Times, wrote that the Miami Herald “damaged journalistic self-respect by skulking around Mr. Hart’s house all night.” Did you have any qualms about that then? Any regrets now?

I have no regrets. I think Anthony Lewis and Rosenthal later came to realize that they were on the wrong side of the issue. Today, much more would be made of the fact that Gary Hart was a sexual predator as well as a philanderer. Donna Rice was a victim of that, not a femme fatale to whom Lewis, Rosenthal, and others of their generation paid little respect. In essence, this story boiled down to a very simple thing: reporter gets tip, reporter verifies tip, reporter writes story, consequences follow. It’s what journalism is all about.

Watch a trailer for The Front Runner here.