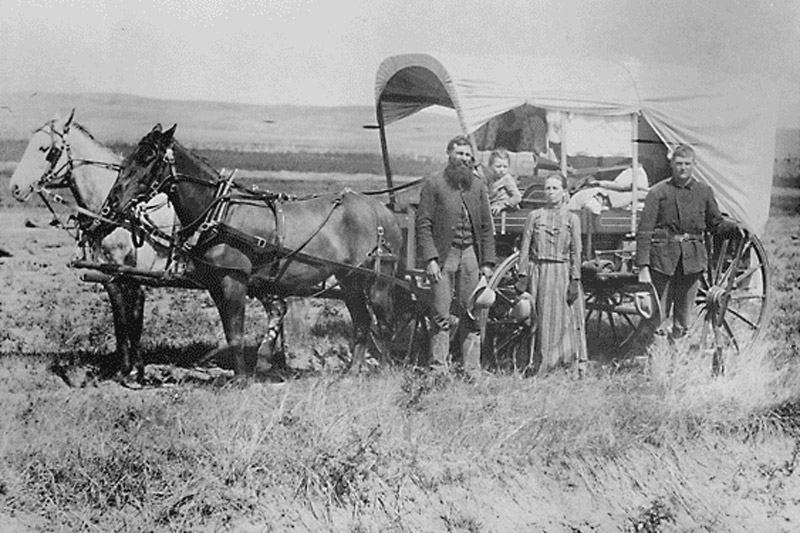 Easterners who heeded the 19th-century call to “Go West, young man” (and they were mostly men, given the harsh frontier conditions) were proverbial rugged individualists. And recent research by BU economists says those pioneers bequeathed their cultural DNA to Americans who live in the same places today.

Even though the frontier closed almost 130 years ago, the paper by Samuel Bazzi and Martin Fiszbein, both College of Arts & Sciences assistant professors of economics, and doctoral student Mesay Gebresilasse (GRS’19), found that people who live in American counties that had the longest frontier experience exhibit the most individualism in the 21st century. Residents of those counties tend to vote Republican for president, support lower property taxes and smaller government, and are averse to public spending, redistribution, and regulation of things like guns and pollution.

Each decade a county was part of the frontier, the paper notes, “is associated with 3.5 percent more votes for Republican candidates in presidential elections since 2000. This association ratchets up over the 2000s as each election exhibits a significantly larger effect.”

And as late as 1940—half a century after 1890, when the US Census Bureau declared the frontier closed and the last time it tracked popular children’s names at the county level—families in longtime frontier counties chose more unusual names for their children, favoring Reuben and Lucinda, for example. “We borrow our names-based measure of individualism from social psychologists, who note that individualistic types are prone to give their children infrequent names, reflecting a desire to stand out,” the paper’s authors write. (The paper was posted by the National Bureau of Economic Research.)

The upshot for the authors, says Bazzi, is that culture can trump changing economic circumstances, given that the frontier mind-set endures long after roads, homes, and other tendrils of civilization have reached into the old frontier.

“The way that people tell and sustain narratives about the past oftentimes motivates their reasoning and the way they view current events,” he says. “People come to view themselves as potentially carrying on that tradition.… Culture is sticky, and culture doesn’t change as quickly.” (This applies in other areas of life, according to Bazzi; for example, developmental economics teaches that cultures with big families cling to that practice even when economic circumstances make smaller families more feasible.)

“It’s individualists who were attracted to the frontier because of those conditions, and then once they’re there, those conditions further amplify the individualism and the importance of self-reliance,” Bazzi says. Those individualists were disproportionately male and ages 15 to 49, he says, because “it was easier for men to strike off on their own and thrive in this harsh environment,” which could be crime-ridden and demanded manual labor and trekking over terrain without roads.

This turf made people resent government aid to those who the pioneers saw as less hardworking than themselves, the researchers found. The sense of Manifest Destiny, the idea that the continent was America’s for the conquering, sired attitudes against curbing pollution and environmental despoliation among today’s dwellers in longtime frontier counties.

“You see the frontier having this sort of lasting imprint on their preferences about things like regulation, even if we account for their partisanship or economic personal circumstances,” Bazzi says.

They also studied psychological insights into the link between individualism and the frontier, which was noted as far back as 1893, when historian Frederick Jackson Turner suggested that the latter bred the former.

“His notion of individualists settling the frontier is something that social psychologists have extended to thinking about frontiers more generally,” Bazzi says. For example, he says, Japanese psychologist Shinobu Kitayama “documented similar sorts of traits in Japan” among frontier dwellers.

BU Researchers: The American Frontier Continues to Shape Us

BU Researchers: The American Frontier Continues to Shape Us
2
share this