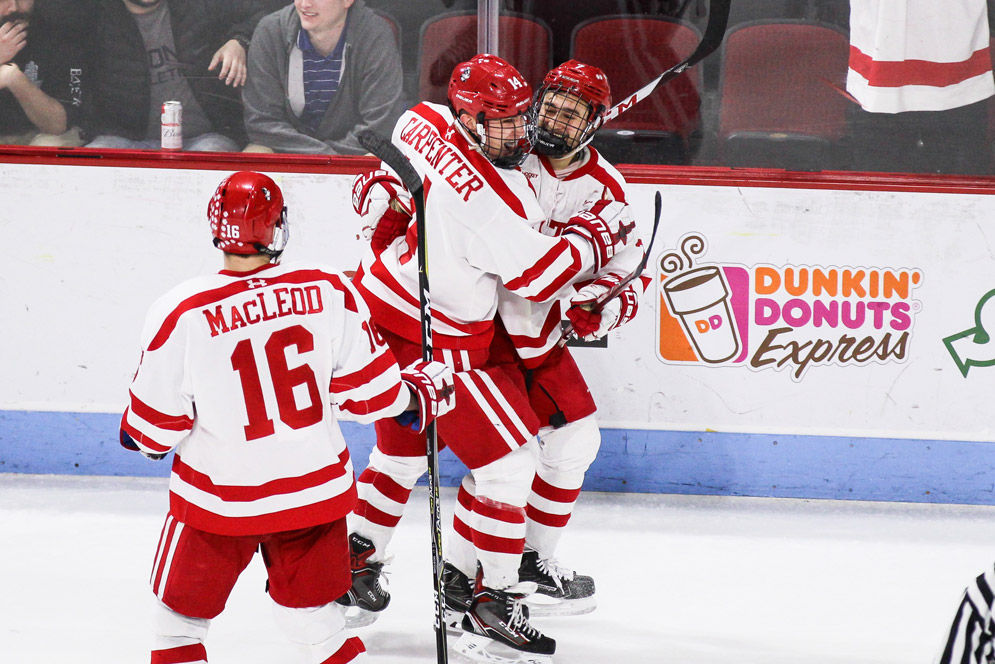 The number 18 Terriers will meet their Green Line rival BC in the semifinal round of the men’s Hockey East Tournament tonight at TD Garden. Photos by Matt Dresens

A close sweep of the UConn Huskies in last weekend’s Hockey East Tournament best-of-three quarterfinals is sending the number 18 men’s hockey Terriers to the single-game elimination semifinal round tonight at TD Garden, where they’ll go up against the number 14 Boston College Eagles. The Terriers will look to continue their strong 2018 showing.

“It’s kind of been the tale of two seasons,” says head coach David Quinn (CAS’87). “We felt we had played some pretty great hockey early, yet we were finding ways to lose. It was the difference between playing pretty well and playing winning hockey, and we weren’t playing enough winning hockey.”

Despite beginning the season ranked number two in the country, the Terriers had an 8-11-1 record after their first game in January, a 3-0 loss to Maine. But since then, every aspect of the team’s performance, from goalkeeping to defensive coverage to offense has improved. The result: an eight-game undefeated streak (seven wins and a tie) to turn the season around. The team currently has an 11-3-3 record in 2018, 19-13-4 overall.

“There were definitely a lot of highs and lows, but that’s usually how every season goes,” Chase Phelps (Questrom’18) says. “The most important thing is that we’re on one of the highs right now. If we keep playing the way we have been, we should have no problem going on the stretch here.”

Some of the most impressive players on a star-studded roster that includes Jordan Greenway (CGS’17, CAS’19), who played for Team USA in the 2018 Winter Olympics in South Korea, have been the Terrier rookies. With nine freshmen, BU has one of the youngest teams in college hockey this season. Many have been crucial to the team: Shane Bowers (CGS’19) and Brady Tkachuk (CGS’19) are among the scoring leaders. Bowers ranks second, with 30 points, Tkachuk fifth, with 28.

The two were selected to the Hockey East All-Rookie Team earlier this week. BU shares the distinction, with Bowling Green, of being one of only two teams in the country with two freshmen who’ve scored 28 or more points.

“We had to put them in there and rely on them in key roles,” Quinn says of his freshman class. “They’re a big group in numbers, and the quality is deep as well. They’re an integral part of our team. When you’ve got eight of them playing nightly, they’d better be. It’s been a really great class, and hopefully their best hockey is ahead of them.”

The BU players are determined that their season’s strong second half will not make them take anything for granted as they continue in the postseason tonight.

“Obviously, we’re in a do-or-die situation, so that’s exciting in itself,” says goaltender Jake Oettinger (CGS’18). “This is what you train for the whole year. Everyone’s got their backs against the wall, so the games are a lot more intense.”

“We definitely have to keep the momentum going,” says veteran player Phelps, who has played in 11 Hockey East playoff games and was part of the team that captured the Hockey East title in 2015 and advanced to the Frozen Four championship game. He says they need to “take in the good pieces of each game and put that whole 60 minutes together each night, and that’s the recipe for success going down the stretch.”

A century after their first face-off in February 1918, BU and BC collide tonight in what’s probably their most important meeting in 12 seasons. The Terriers have a chance to avenge last season’s elimination in the league tournament semifinal game, when BC came out on top 3-2. The two teams have fared evenly during the regular season, as each routed the other on the road in a two-game series in December.

The Eagles are riding a six-game winning streak, and the Terriers have won four of their last five. While the seeding favors BC, Oettinger says the Terriers are confident they can advance to the championship game.

“Every guy in this locker room believes in each other and believes in our mission,” he says. “We know that we can beat anyone in the country if we play the right way.”

BU faces Boston College in the first Hockey East semifinal matchup tonight, Friday, March 16, at 5 pm. The second semifinal game, between Northeastern and Providence, follows at 8 pm. The winners of the semifinal games meet in the Hockey East championship game tomorrow, Saturday, March 17, at 7 pm; all games are at TD Garden, 100 Legends Way, Boston. Purchase tickets here; a limited number of BU student packages are available for purchase at the Agganis Arena ticket office. Once those tickets are sold out, discounted student tickets can be purchased at the TD Garden ticket office, depending on availability. All games will be shown on NESN and ESPN3.