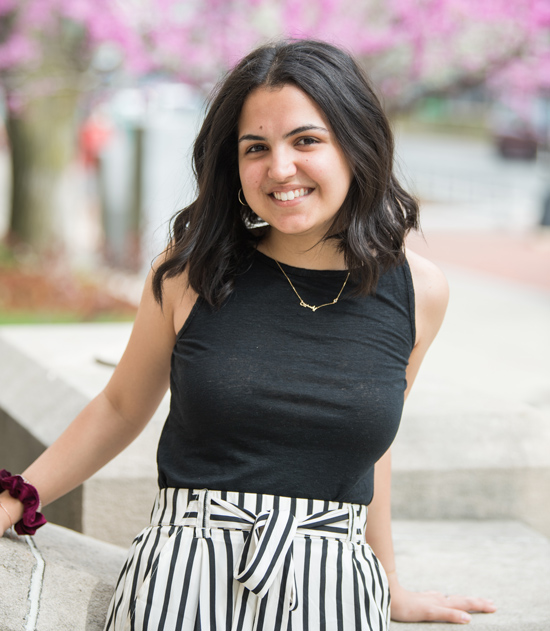 Yasmin Younis (COM’18) will be the student speaker at BU’s 145th Commencement on Sunday, May 20. Photo by Cydney Scott

Yasmin Younis was in kindergarten when al-Qaeda extremists highjacked four airplanes and attacked the World Trade Center and other targets on September 11, 2001, yet the event cast a shadow on much of her life.

Living in Missouri, the daughter of Iraqi immigrants, Younis (COM’18) became “that Arab girl,” she says, and endured taunts from classmates who commonly referred to her as a terrorist.

“It kind of made me hate myself,” Younis says, recalling her embarrassment about her family’s Muslim religious customs and her skin color. “The person I am now is very different. I’m very comfortable with who I am.”

Younis reflects on her path as she puts the finishing touches on the speech she will deliver Sunday to a crowd of about 27,000 graduates and guests at Nickerson Field as BU’s Commencement student speaker.

The thing that really helped her, says the 22-year-old honors mass communication major, was the Black Lives Matter movement. As a freshman at the University of Missouri in 2014, Younis participated in the street demonstrations in St. Louis after a grand jury acquitted the white Ferguson, Mo., police officer who fatally shot Michael Brown, an unarmed black man, igniting weeklong protests against police brutality in Ferguson.

The incident made Younis realize that a Muslim of any color could also very likely face similar treatment by police, and she says she has been a member of Black Lives Matter ever since. “I had to become more in tune with that side of myself rather than being ashamed of it, because that’s really hypocritical,” she says. “Being in college and being away for the first time allowed me to have that sense of freedom to experiment with who I was.”

Younis transferred to BU as a sophomore, with the support of her parents. Her cardiologist father came to the United States for his medical residency and her mother in the 1990s, fleeing the Gulf War.

BU, she says, offered a new and energizing environment for her to explore her budding passions while reclaiming her Arab identity. “I was getting to meet a lot of other people who are like-minded, people who might not be Muslim or Arab, but who were part of a first-generation family or persons of color,” she says. “That really helped me.”

She has become proficient in Arabic and was president of the Arabic Society as well as the public relations coordinator for the BU Admissions Student Diversity Board.

Last year, Younis participated in a video produced by Teen Vogue about the effects of Halloween costumes that display offensive cultural stereotypes. The video went viral on Facebook and was viewed more than 36,000 times.

Younis was chosen by a seven-member Student Speaker Selection Committee, which began the process of vetting nearly 40 speech proposals earlier this spring. She came out on top after she and several other finalists presented their remarks in person.

“She just stood out for her poise and her enthusiasm and the way she blended a lot of themes,” says committee member Tammy Vigil, a College of Communication assistant professor of communication. Younis’ remarks had all the hallmarks of a good speech, Vigil says: they were personal and relatable, while weaving together ideas about the value of diversity and unity.

“It didn’t feel like a five-minute speech,” she adds. “It was engaging enough to carry the situation.”

Younis wrote successive drafts, practicing in front of the committee and listening to feedback from members. It was an invaluable experience, she says, for a student interested in working as a communications liaison for a human rights nonprofit or becoming an activist lawyer.

She will continue to seek ways to help people understand the beautiful aspects of Iraqi culture and the Muslim faith, Younis says. After Commencement, she will return to St. Louis to celebrate a traditional Ramadan with her family, a practice she now treasures.

She smiles when she recalls her transformation from a high schooler eager to fit in to a young woman who might spend a typical Friday night reading news reports or The Autobiography of Malcolm X.

“Now all I really ever talk about is being Iraqi and being Muslim,” Younis says. “I can’t even imagine being ashamed anymore.”