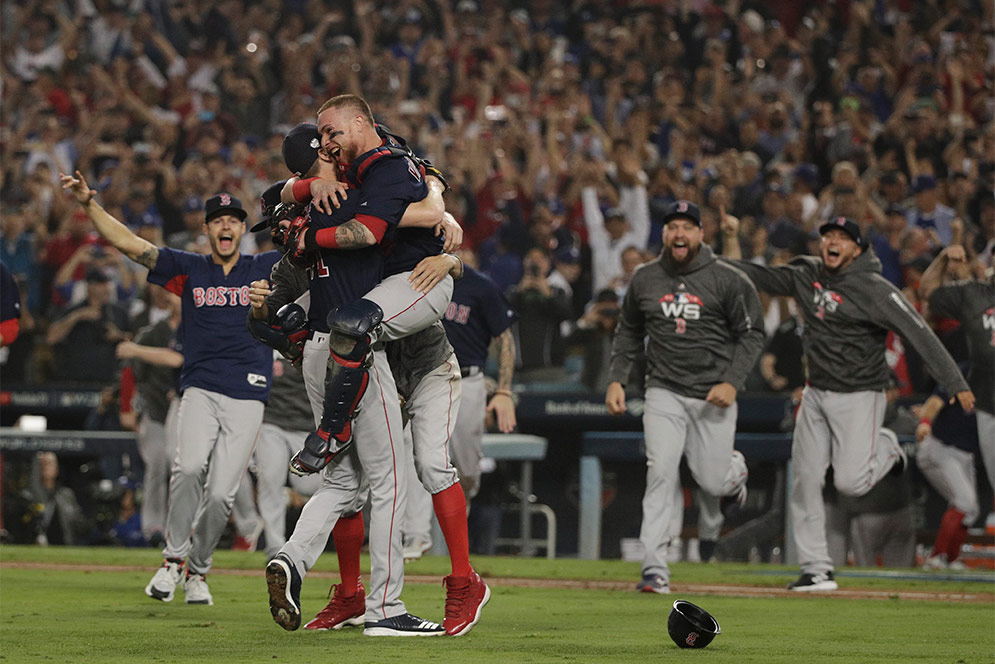 There is joy in Mudville: The elated Red Sox after their 5-1 defeat of the Los Angeles Dodgers in game five Sunday night to win the ninth World Series in franchise history and fourth since 2004. AP Photo/Jae C. Hong

As just about every New Englander, and much of the rest of the country, knows, the Boston Red Sox defeated the Los Angeles Dodgers 5-1 Sunday night to capture the 2018 World Series in five games. It’s their fourth World Series title in 14 years, and on Wednesday, the team’s home city will celebrate the victory with a rally and a Duck Boat parade starting at 11 am.

Parking restrictions along the parade route went into effect at midnight Tuesday and will remain in effect until 11:59 pm Wednesday. Fans are strongly encouraged to take public transportation, and to arrive early. The MBTA will provide extra service on Wednesday, including additional commuter rail trains.

In a press conference Monday, city officials emphasized that no alcohol consumption will be permitted along the parade route. Fans are welcome to turn out in Halloween costumes, with one notable exception: no costumes with replica firearms will be permitted. The Boston Police Department will have extra officers on duty along the parade route. Walsh and William Gross, Boston’s police commissioner, urge Bostonians to have fun and celebrate, but to do so responsibly and safely.

“We are a city of champions, so let’s celebrate like champions,” Walsh said Monday.

The Boston Red Sox rolling rally championship parade is Wednesday, October 31, beginning at 11 am, and will last approximately two hours. The parade will start at Fenway Park, on Lansdowne Street, take a right onto Ipswich Street, a left onto Boylston Street, a left onto Tremont Street (opposite traffic flow) to Cambridge Street, and then a right onto to Staniford Street, where it will end. Find more information about the parade route, parking restrictions, and recommended transportation here.

Find the latest information about MBTA service to the parade here.