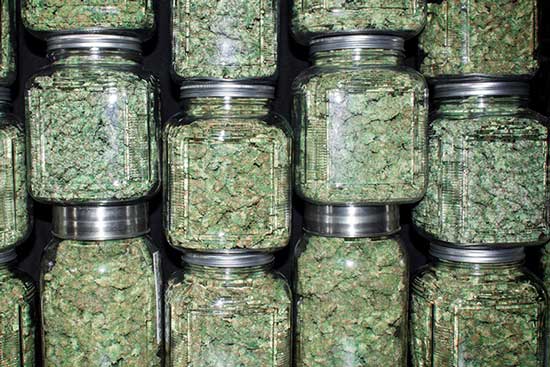 Massachusetts voters passed a ballot initiative two years ago permitting marijuana use by people age 21 and older. In July 2018, the commonwealth became the seventh state to allow the sale of marijuana for recreational purposes. Since then, the Cannabis Control Commission (CCC) has issued 20 provisional licenses for retail sale and final licenses to 2 retail establishments for adult-use marijuana, although no recreational sales have begun to date. The first recreational marijuana shops could open before the end of this month, but it remains to be seen what the consequences of legalized recreational cannabis will be.

The School of Public Health will explore the topic today at its annual William J. Bicknell Lecture. Headlined So We Legalize Marijuana. Then What Happens? the lecture is free and open to the public.

A panel of scholars and experts from the public health and science fields and the cannabis industry will discuss what the public can expect once recreational marijuana sales begin. The panel speakers are Keith Cooper, Revolutionary Clinics CEO; Deborah Hasin, a Columbia University College of Physicians and Surgeons and Mailman School of Public Health professor of psychiatry and epidemiology; Beau Kilmer, RAND Drug Policy Research Center codirector; and Marisa Silveri, director of the McLean Hospital Imaging Center Neurodevelopmental Laboratory on Addictions and Mental Health and a Harvard Medical School associate professor of psychiatry. The panel will be moderated by Richard Saitz (MED’87), an SPH professor and chair of community health sciences.

BU Today spoke with panelists Cooper and Silveri about the complexities of legalizing recreational marijuana and how this legalization will impact the existing medicinal marijuana industry, criminal justice reform, and the health of the public.

BU Today: How does the delay in opening recreational marijuana shops indicate the complications associated with legalizing the recreational sale of cannabis?

Silveri: From the perspective of a neuroscientist, the delay presents an important opportunity to become better versed in the increasingly available and burgeoning scientific evidence supporting that marijuana use is associated with adverse health and safety risks, particularly in youth. Nonetheless, the delay perhaps suggests a lack of detailed anticipation and planning surrounding the move towards legalization.

Cooper: I think everyone was surprised that the start date was delayed beyond July, because the process started well over a year before that. The process is very complicated because it’s new. Some of the other states that have been through this have done a good job at the regulatory framework, and I think the Massachusetts delegation was able to incorporate the best rules and regulations. But the CCC was not able to get testing labs processed and licensed or get the packaging requirements and labeling defined well enough for recreational marijuana, and they weren’t clear on how they were going to deal with medical and adult-use marijuana sales in the same retail facility.

The second cause of the delay is that cities and towns had to approve local ordinances for marijuana establishments. By July 1, some of the rules and regulations weren’t finished, or the cities and towns were given permission to implement a moratorium or wait until the end of the year to open. So the state rules and regulations weren’t ready, and the cities and towns’ abilities to pull together zoning and special permits weren’t happening quickly enough. But the CCC has worked really hard to become a regulatory body that will exist for many years.

Almost 200 municipalities have a moratorium or ban on recreational marijuana shops. Does this defy the will of the majority of Massachusetts voters in favor of legalizing marijuana for recreational use? Do these moratoria reflect NIMBYism on the part of residents?

Silveri: I have served as a presenter for many marijuana forums around the commonwealth over the past two years, with more recent appearances occurring in towns working towards banning recreational use. My job as a neuroscientist in such forums is to digest the available data on marijuana effects on brain and mental health in order to provide the information necessary for individuals in the community to make informed decisions about use. I would venture that many laws have been passed, and that with time, it is recognized that the law being passed is not in the best interest of the health and welfare of its citizens. Thus, I do not think the action defies the will of those voting in favor of legalizing recreational marijuana. The legal system exists to protect its citizens, and as such, the mounting evidence that has come to light around the negative effects of marijuana on health and well-being is an important part of this process.

To this end, recent reports from peer-reviewed scientific journals provide evidence that in states where recreational marijuana has been approved, there is increased incidence of emergency rooms visits that are linked to marijuana exposure, as well as increased prevalence of psychiatric symptoms and disorders associated with marijuana use. The necessary scientific investigations that are both rigorous and reproducible and that probe the impact of marijuana effects on health and well-being cannot be conducted and reported at a pace fast enough to provide the information we need to know to make informed decisions about legalization.

Cooper: For many of us, the moratorium and bans were disappointing, because they delayed the availability of our products for the people who voted for them. But I don’t mind that some cities and towns decide that they don’t want these stores in their town. I think people move to cities and towns for certain reasons, such as schools, rural versus urban environment, and retail availability. People have their own reasons for living in a place, and it’s really up to them whether they want to allow certain businesses to move into their town. I don’t begrudge cities and towns making up their own minds about recreational marijuana—as long as they’re following the voices of their own voters.

Silveri: Increasing the availability of recreational marijuana certainly could have a negative influence on the market of prescribed medical marijuana. Such influences might include dosage and regulation concerns, as well as an increased ability to obtain marijuana in those who have not sought out or have not received consent or consultation by a licensed health care provider. Some individuals may have been more ambivalent with regard to voting to legalize marijuana given the use of the term “medical”; the term “medical” has become a moniker suggesting that prescribed use of marijuana is acceptable because the process is vetted by professionals with the necessary training and expertise. Recreational use carries less restrictions and guidance, so those unable to obtain medical permission may take their own initiative in self-prescribing, which has its own host of dangers.

I hear every day how effective marijuana can be to treat health conditions such as epilepsy, Crohn’s disease, seizures, anxiety, depression, and sleep. For these specific ailments, it’s really an amazing product.

Research has shown that cannabis has both health risks and health benefits. What health risks of recreational marijuana may be overexaggerated?

Silveri: There is scientific evidence that strongly supports major health risks associated with marijuana use. And as in any type of scientific inquiry, there also exist studies that show modest or no negative effects of marijuana use, albeit less evidence than in the major health risk studies. We simply do not know enough. Because marijuana is not regulated, and any given strain can vary significantly in potency, which has increased multifold beyond marijuana from 20 or 30 years ago, the proper studies have either not yet been conducted or are in process, but the resulting data have not yet reached public awareness.

Cooper: There are certainly some health risks that are overexaggerated, without a doubt. The biggest dangers of using a product such as marijuana is overdoing it and driving a vehicle, or being in a position where you’re not fully in control of yourself. I think that’s very rare, but certainly that’s the biggest danger. There’s very little evidence that marijuana is addictive or causes long-term negative health consequences like alcohol—which is both addictive and bad for your body in excess—and like traditional medication that cannabis is now replacing, such as opioids and other narcotics. These narcotics are billion-dollar industries that are advertised to us every single day on television and in newspapers and magazines. They are terribly addictive and bad for your system. Everybody knows it, and continues on as if it’s not a problem.

To what extent do you think legalization will improve the state’s criminal justice system and help repair harm to marginalized groups disproportionately arrested for possessing or using the drug? Do you see any downside?

Silveri: I do not support the criminalization of those addicted to substances. We should advocate for access to efficacious treatment for all individuals, regardless of race, ethnicity, etc. Given that a disproportionate number of arrests of individuals from minority groups is likely one of the driving factors behind support for legalization, this disparity could potentially improve.

Perhaps individuals will not be arrested for possession, but increasing availability and frequency and quantity of use will increase impairments in impulse control and decision-making, which can lead to a higher incidence of crime. The impact of marijuana use on brain function does not discriminate amongst races and ethnicities—however, youth, with their still-developing brains, will experience a greater magnitude of negative impacts of marijuana use.

Cooper: Many states are currently going through a process of reviewing past convictions for relatively minor drug offenses that have involved marijuana. Those people in many states are being released into society, and I think that’s a wonderful thing, because the laws have been way too strict over a product that’s not that bad for you and doesn’t create a public nuisance. I think recreational legalization will be life-changing for those people. It will be a great benefit to society not to have police spend half their time dealing with minor marijuana infractions. They can spend more time dealing with bad guys doing bad things, and the system can spend more time dealing appropriately with situations and cases that are relevant for the court system. I think people will find themselves in a better societal system.

Using other states that have legalized marijuana as examples, how can the public health field better collaborate with the marijuana industry to ensure public safety?

Silveri: It is crucial to provide education to the public, as well as to develop and implement prevention practices aimed at all ages, but specifically for youth. Providing education, increasing prevention, and focusing on mental health and wellness are measures that will increase public safety. Given the increase in prevalence of mental health conditions associated with marijuana use, it is important to promote other aspects of health that may help protect against use, e.g., healthy nutrition and sleep practices, exercise, etc., all of which will have positive impacts on brain function that may in turn enhance impulse control and decision-making at all ages, particularly in youth.

Cooper: I would love it if the healthcare system would get more involved with studies, trials, and testing, so that everyone could rely on facts and data, as opposed to emotions and assumptions.

The 2018 William J. Bicknell Lecture in Public Health is today, Thursday, October 25, from 4:30 to 6:30 pm at the School of Medicine Instructional Building Hiebert Lounge, 72 East Concord St. The event is free and open to the public. The Bicknell lectureship is named in honor of the late William J. Bicknell, founder and chair emeritus of the SPH global health department. Live streaming will be available here.

Find information about the policies surrounding the use of recreational marijuana here.

There are 4 comments on Recreational Marijuana: “Wonderful Thing” or “Major Health Risk”?