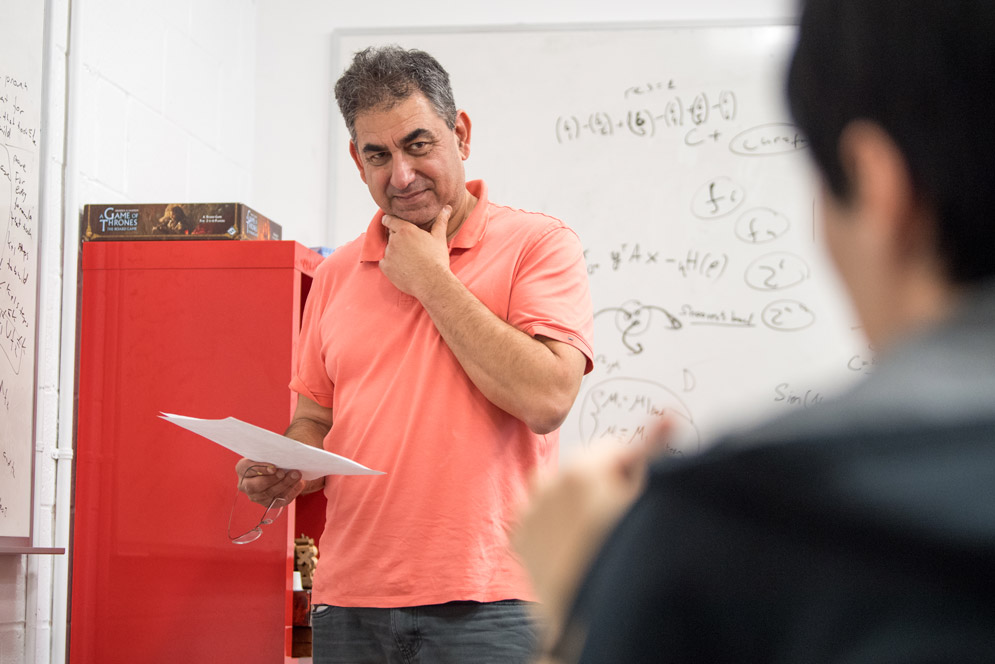 Ran Canetti, a CAS professor of computer science, has won one of the top awards in cryptography. Photo by Cydney Scott

BU’s Ran Canetti has been awarded one of the top honors in his field of computer science—the 2018 RSA Conference Award. The College of Arts & Sciences professor of computer science won the award for his pioneering work in cryptography. Canetti’s many contributions include a mechanism that enables people to communicate and interact securely over the internet.

“Ran developed a building block that allows people day in and day out to authenticate themselves on the internet,” says Azer Bestavros, a William Fairfield Warren Distinguished Professor and a CAS professor of computer science. The founding director of the Hariri Institute for Computing and Computational Science & Engineering, Bestavros refers to the authentication protocol called HMAC, which Canetti coinvented in 1996. “Anytime you access BU accounts, or visit a secure website—like Amazon or Google or Netflix—you’re using Ran’s building block. Billions of people use it every day. That building block is embedded in the fabric of the internet.”

Noting Canetti’s other work on internet security, and his efforts to connect computing to law and public policy, Bestavros credits the computer scientist with helping to establish BU’s presence in the fields of cryptography and cybersecurity.

Canetti, who is also the director of the Hariri Institute’s Center for Reliable Information Systems & Cyber Security, accepted the lifetime achievement award at the RSA Conference in San Francisco in April.

Canetti and Rafail Ostrovsky, a University of California, Los Angeles, professor of computer science and mathematics, both received the RSA Conference Award for Excellence in the field of Mathematics. “Their combined experience developing novel problems, models, and fundamental notions opened the door for multiple new directions in cryptography,” according to the award citation. In addition to the HMAC protocol, the award also honored, among Canetti’s other contributions, his work on universally composable security, which enables the building of secure systems, component by component.

“I’m really honored,” says Canetti, who grew up in Israel and earned a PhD from the Weizmann Institute of Science. “I’m standing on the shoulders of my teachers and a lot of other people.”

The annual awards, which were established in 1998, have in the past honored excellence in three fields—mathematics, information security, and public policy.

“People working on the mathematical foundations of computer science are usually seen as working in ivory towers,” says Bestavros. “Nothing could be further from the truth for Ran. Even though his work is highly theoretical, its impact on society is immeasurable. Without it, the internet wouldn’t be secure.”

“This award is a very big deal,” says frequent collaborator Leonid Reyzin, a CAS professor of computer science, who also works in cryptography. “It’s for lifetime achievement, but Ran is not nearly done yet as far as I can tell. I have very high hopes for things he is working on now.”

Canetti says he is particularly honored to have received the award this year, when a fourth category—humanitarian service—was added. The winner of that award, Tim Jenkin, is a former political prisoner and communications officer for the African National Congress. Jenkin and his team created a communication system that allowed them to smuggle messages to Nelson Mandela during his almost three decades in prison in South Africa, speeding the dismantling of apartheid in that country.

“I’m very happy they chose to do this,” Canetti says of Jenkin’s award. “It makes me more proud to be part of this award when it’s not just about mathematics, but specifically about using cryptography for social good.”

Canetti, known among his colleagues for his modesty, acknowledges that he has also been working in cryptography for “social good.” However, he says, “I’m on the mathematical side. It’s harder to see.”