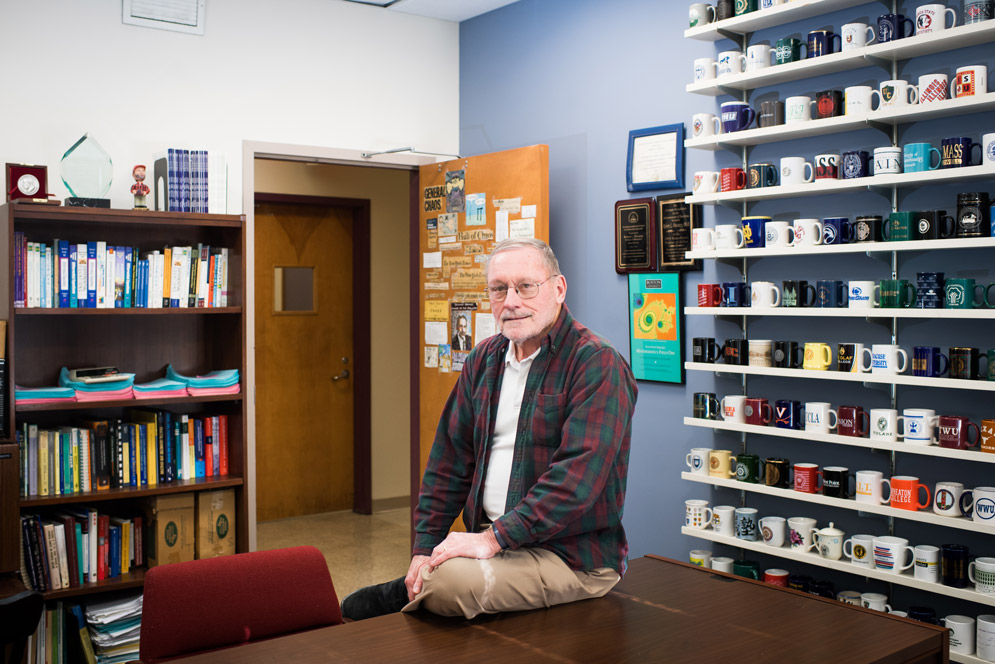 Click on the circles above to see more of what Robert Devaney displays in his Cummington Mall office.

With more than 300 coffee mugs in his office, Robert Devaney might seem at risk of caffeine overload. Not to worry—he swore off coffee years ago and now sticks to Earl Grey tea.

The College of Arts & Sciences professor of mathematics and statistics has been at BU nearly 40 years, and in 2010 was named the first Feld Family Professor of Teaching Excellence. He began collecting mugs at mathematical conferences and when giving talks at other schools. Word soon spread of his interest, and people began to give him a mug as a thank-you present. The collection remained at home until he and his wife downsized and he had to find a new home for it. That’s when he paid to have nine sturdy shelves built in his BU office. “When they were finished, I got a mug from the construction company,” he says.

The majority of the mugs by far are from colleges in the United States (Virginia Tech, Stanford, Hendrix College in Arkansas), but some are from as far away as Tianjin, China, and Sydney, Australia. His go-to tea mug is plastered with Euler’s formula, which Devaney says is one of the most famous formulas in mathematics.

His area of mathematical expertise is complex dynamical systems. “It’s basically chaos theory,” he says. “We try to understand chaos from a mathematical point of view. A meteorologist studies the turbulence in the atmosphere, the chemist studies chemical reactions. I look at x2 + c.”

Devaney will retire in May and become a professor emeritus. The fate of his mugs is less certain. “They can’t come home, so I don’t know what’s going to happen to them,” he says.

There are 2 comments on Office Artifacts: Robert Devaney