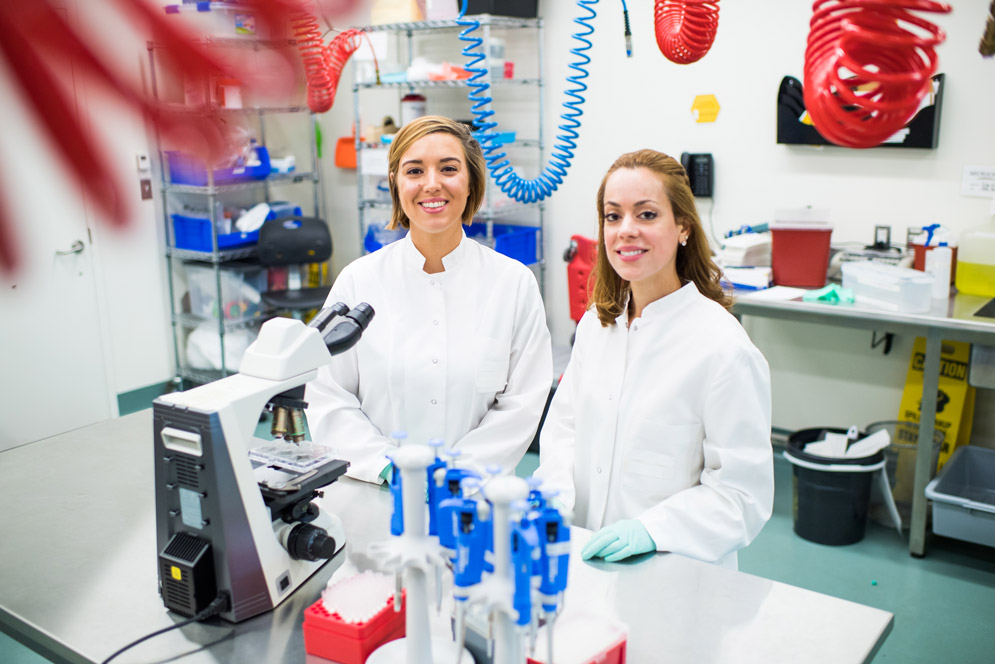 Whitney Manhart (MED’20) (left), a PhD student in Elke Mühlberger’s NEIDL lab, and lab manager Jennifer Pacheco are coauthors of a Cell Reports study about a tool that will help determine whether a new zoonotic virus, LLOV, can cause disease in humans. Photo by Jackie Ricciardi

In recent years, traces of new zoonotic viruses—pathogens that live in animals and could potentially cause infectious diseases in humans—have been discovered in bats, fish, and other species around the world. But scientists have been stumped in their search for the complete genome for these viruses, the critical data that is needed to study their biology, and their potential dangers for humans.

But now, researchers at Boston University’s National Emerging Infectious Diseases Laboratories (NEIDL) have created a tool that they say will unlock many of the mysteries of one of these new pathogens—a filovirus closely related to the Ebola and Marburg viruses—and help them determine whether it could cause disease in humans. Ebola and Marburg are among the most virulent and lethal viruses known to infect humans.

Called Lloviu virus (LLOV), the new filovirus was first discovered in 2002 in dead bats in a cave in Spain; it was found again in 2014, in dead bats in Hungary. It is not known whether LLOV sickened and killed the European bats (known as Schreiber’s long-fingered bats, they are not found in North or South America) or if it causes disease in any animal. As with so many other new viruses, the complete genome has not been found.

The NEIDL team was led by Elke Mühlberger, a School of Medicine associate professor of microbiology, who is one of the world’s leading filovirus researchers. Filoviruses are made up of single-stranded RNA instead of DNA.

Here is how Mühlberger’s team created the new tool: They established a novel minigenome system for LLOV, which allows for the virus to be studied safely in a Biosafety Level-2 lab. Minigenomes are shortened versions of viral genomes, in which all the viral genes—those that cause infection—are removed and replaced by a single nonviral reporter gene. Minigenomes contain all the necessary signals to replicate the virus in cells, but they lack the proteins necessary to produce infectious virus.

“However, in order to make a minigenome, you need the viral start and stop signals that allow for replication,” says Whitney Manhart (MED’20), a PhD student in Mühlberger’s lab, who coauthored with research study technician Jennifer Pacheco a September 4 Cell Reports study on the new tool. “These are exactly what we were missing from LLOV,” she says.

“We currently have no therapeutics or vaccines which would target LLOV, and so answering basic questions about LLOV biology or the disease it might cause could help us be prepared for—or prevent—a major outbreak.” Whitney Manhart (MED’20)

To make up for the missing elements of the LLOV genome, the NEIDL researchers copied and pasted similar sequences from the related Ebola, Marburg, and Reston filoviruses (Reston causes disease in nonhuman primates, but is not known to cause disease in humans). This technique is called sequence complementation.

“While this work is most interesting to people who study filoviruses, the idea could be applied to any kind of virus,” Pacheco says, noting that researchers studying a bat-derived influenza with an incomplete genome used a similar method to create an infectious viral particle.

“The minigenome helps scientists answer some questions about LLOV,” Manhart says, “but we need the authentic virus to answer all questions.”

Using the LLOV minigenome system, Manhart, who has been trained to work in BSL-4 conditions, will produce the real virus in a BSL-4 facility. Then, she says, the virus can be used to study its potential to cause disease.

LLOV was found in bats that live in northern Africa, and across Europe, Manhart says. “So if a spillover did occur, it could infect a lot of people very quickly. We currently have no therapeutics or vaccines which would target LLOV, and so answering basic questions about LLOV biology or the disease it might cause could help us be prepared for—or prevent—a major outbreak. This minigenome system, and importantly, the infectious virus, will be critical in those studies.”

The work on the new tool was begun with support from the NEIDL director’s fund and is now funded by the NIH.