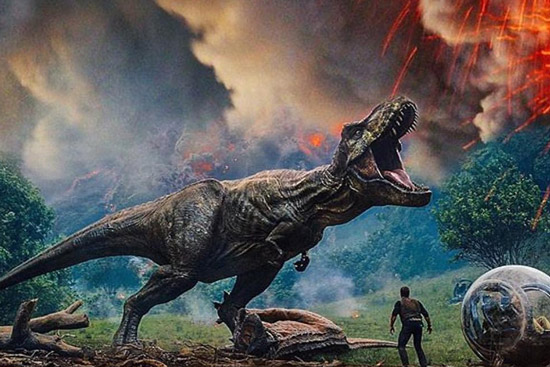 The dinos are back: Jurassic World: Fallen Kingdom, one of this summer’s most anticipated Hollywood blockbusters, hits screens across the country today. Poster © Universal Pictures

We posted a trivia contest on our site this morning to give the rabid Jurassic fans among us a chance to see the latest installment in the popular series. When it ended at 1 pm, the names of those who answered all the questions correctly were entered in a drawing for two free tickets to a screening tonight, Friday, June 22, at AMC Loews Boston Common at 7:45 pm.

The winner is Marie Vearling (CGS’13, Sargent’15), a Questrom School of Business Institute for Health System Innovation and Policy administrator.

1. The Fallen Kingdom score was composed by Oscar winner Michael Giacchino, composer of the Up (2009), Inside Out (2015), and Star Wars: The Force Awakens (2015) scores. Which Oscar-winning composer created the iconic score for the original Jurassic Park?

2. Spielberg’s original film was adapted from a novel by this best-selling author.

3. Which actor did Spielberg persuade to come out of a 14-year retirement to costar in 1993’s first film?

4. To create the sound of a T. rex’s roar in the original film, sound designers reportedly had to combine sound clips from a tiger, an alligator, and which baby animal?

5. Owen Grady, played by Chris Pratt, worked at Jurassic Park as a Velociraptor trainer in Jurassic World (2015), but prior to that was employed in which US military branch?

6. Harvard geneticist George Church says it may one day be possible to re-create actual dinosaurs by examining the genomes of existing animals to replicate ancient DNA. He is already researching this process for which ancient animal?

7. Paleontologists credited Jurassic Park with portraying dinosaurs accurately—the filmmakers consulted paleontologists during the production—but the latest films have been criticized for ignoring what recently discovered feature of dinosaurs?

Many dinosaurs had feathers.

8. Known for uttering the iconic line, “Life finds a way,” in the original film, this actor is returning to the Jurassic franchise for the first time since appearing in The Lost World: Jurassic Park.

9. In Jurassic World: Fallen Kingdom what natural disaster threatens the island and its dinosaurs?

10. Jurassic World: Fallen Kingdom had its world premiere on May 21 in which European city?

Check out a trailer for Jurassic World: Fallen Kingdom here.

How Did You Score on Our Jurassic Trivia Quiz?

How Did You Score on Our Jurassic Trivia Quiz?
0
share this