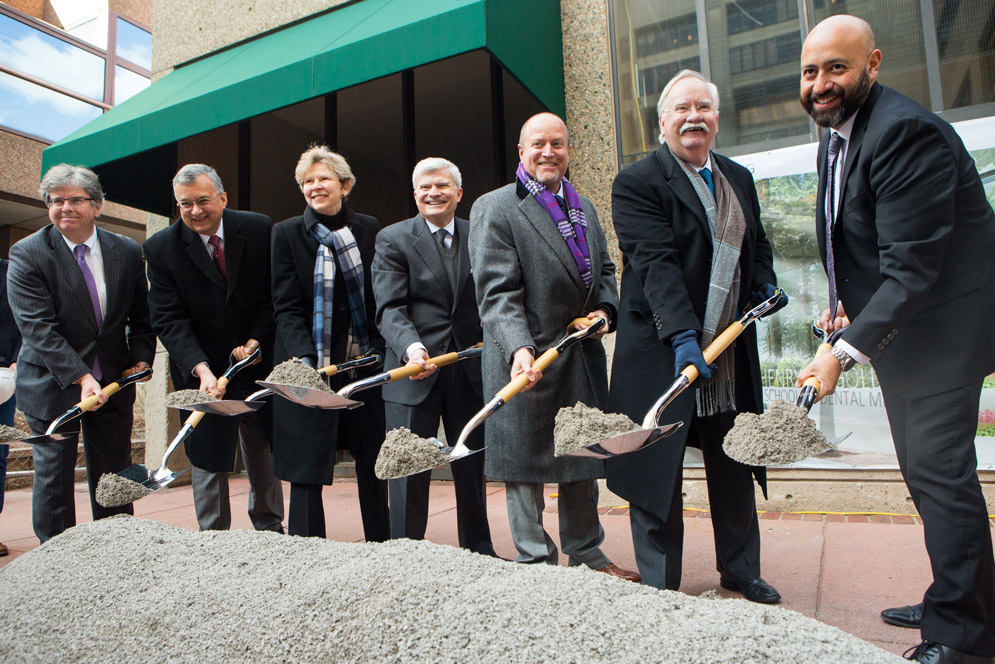 Under a wind-whipped tent on an unseasonably cold April 5, Jeffrey W. Hutter, dean of the Henry M. Goldman School of Dental Medicine, hosted a celebratory rite of spring he’d first envisioned nine years ago: the groundbreaking ceremony for his school’s three-year, $112 million renovation and expansion.

The idea for the major expansion—and cutting-edge modernization—of the school’s seven-story building at 100 East Newton Street grew out of the strategic planning that began in 2009, said Hutter, the Spencer N. Frankl Professor in Dental Medicine. “Our vision,” he said, “was to become the premier academic dental institution providing excellence across dental education, research, oral health care, and community service to the global population.”

Hutter said the project, which adds 48,000 square feet, includes a seven-story addition that will have administrative space, instruction, and preclinical spaces and a two-story addition with a new 140-seat auditorium. The new building will also have a state-of-the-art patient treatment center with 10 group practices and 10 patient treatment rooms in each, as well as a new patient entrance on the corner of East Newton and Albany Streets and a new reception area. A new façade with contemporary sheathing and lots of glass will allow in natural light. And while all this construction is going on, Hutter said, classes will continue as scheduled, and patients will be seen without interruption.

Other speakers at the groundbreaking were Robert A. Brown, University president, Karen Antman, dean of the School of Medicine and provost of the Medical Campus, David Lustbader (CAS’86, SDM’86), chair of the SDM Dean’s Advisory Board and a major contributor to the building’s renovation, and Marty Martinez, city of Boston chief of Health and Human Services.

Brown told the attendees that under Hutter’s strategic planning and “very careful fiscal management,” the dental school has followed “a path to academic leadership built around the group practice model for modern dental medicine.

“Living with the noise and the disruption of the construction will not be pleasant,” Brown said, “but the result will be spectacular.” SDM, he said, is “one of the very best dental schools in the country.”

Antman said the construction would require the temporary relocation of some students and staff. “But remarkably, everyone is eager,” she said. “One group will be moving three times and even they were eager. They were excited for the end result.”

Lustbader recalled a lunch with Hutter in the dean’s office back in 2010, where it all began. “He laid out the vision for the new dental school and he asked me to write a large check—which I did,” Lustbader said. “This is really the culmination of one man’s vision. He’s very modest and he likes to say it’s a team effort, but a team needs a quarterback and this would not have happened without him.”

Also present yesterday were the lead architects for the project, Chris Purdy and David Johnson of the architectural firm SmithGroup JJR. Hutter thanked the architects, along with “the engineers, planners, communicators, faculty, staff and students, and many other professionals” who he said had become part of the SDM “project planning team.”

Groundbreaking for “New” Goldman School of Dental Medicine
0
share this