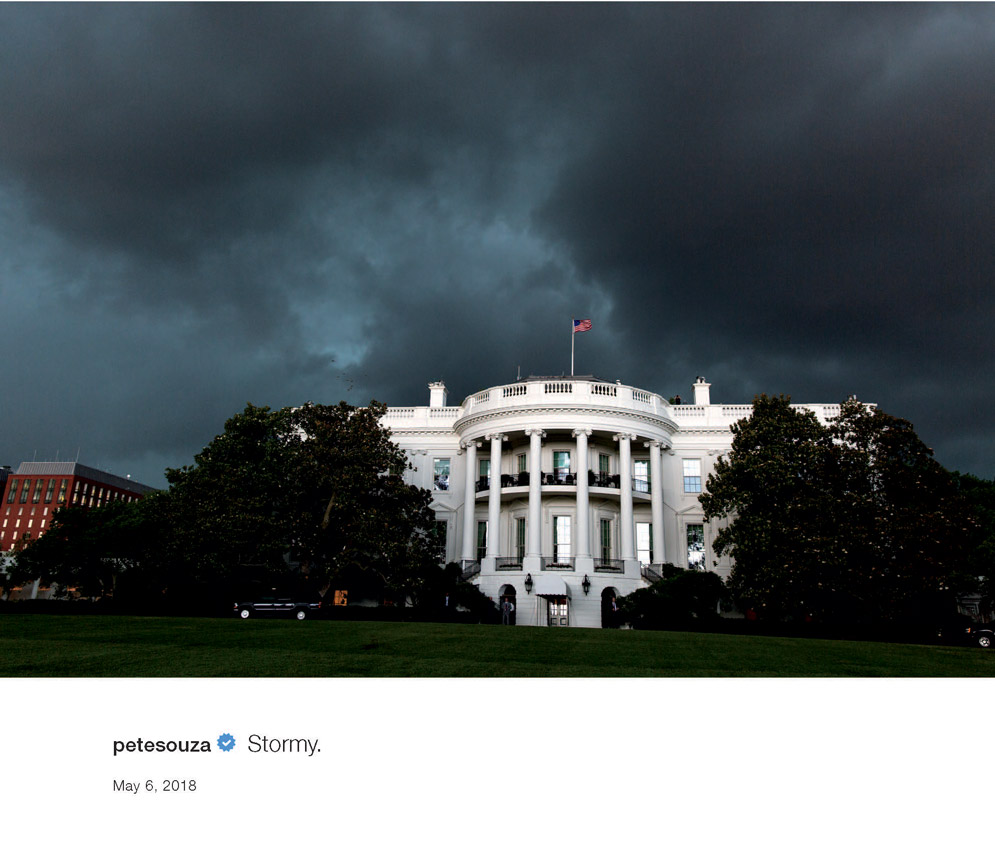 From 2008 to 2016, Pete Souza worked at the job of a lifetime: he was the White House photographer, chronicling the first US African American president. Last year Souza (COM’76) spoke with BU Today about his book Obama: An Intimate Portrait a collection of pictures from his eight years on the job that made some readers tearfully nostalgic for the 44th president. It became a number-one bestseller.

At the time, Souza didn’t talk much about the way he was using his @petesouza Instagram feed to needle Obama’s replacement, Donald Trump, but nonetheless, it got a lot of attention. He responded to the 45th president’s public gaffes, combative tweets, and assorted graceless moments by posting pictures that showed Barack Obama in, well, a contrasting light. His 2.1 million Instagram followers enjoyed the way he was throwing shade on Trump, but Souza said he preferred to let the posts speak for themselves.

Now Souza is back on the road with Shade: A Tale of Two Presidents (Little, Brown, 2018), which offers a curated version of his Instagram feed between hard covers. Just like his first book, it’s hit best-seller lists. And these days he’s more than willing to discuss his feelings about Trump.

The book begins by reproducing a @realDonaldTrump tweet: “An ‘extremely credible source’ has called my office and told me that @BarackObama’s birth certificate is a fraud.” Facing it, on the title page, is a Souza picture of Obama pointing an accusing finger at himself in the mirror, just kidding around. It’s a not-so-subtle mocking of Trump’s accusation. Similar contrasts continue throughout the book. Sometimes it’s substantive, sometimes it’s a matter of personal grace, sometimes both. 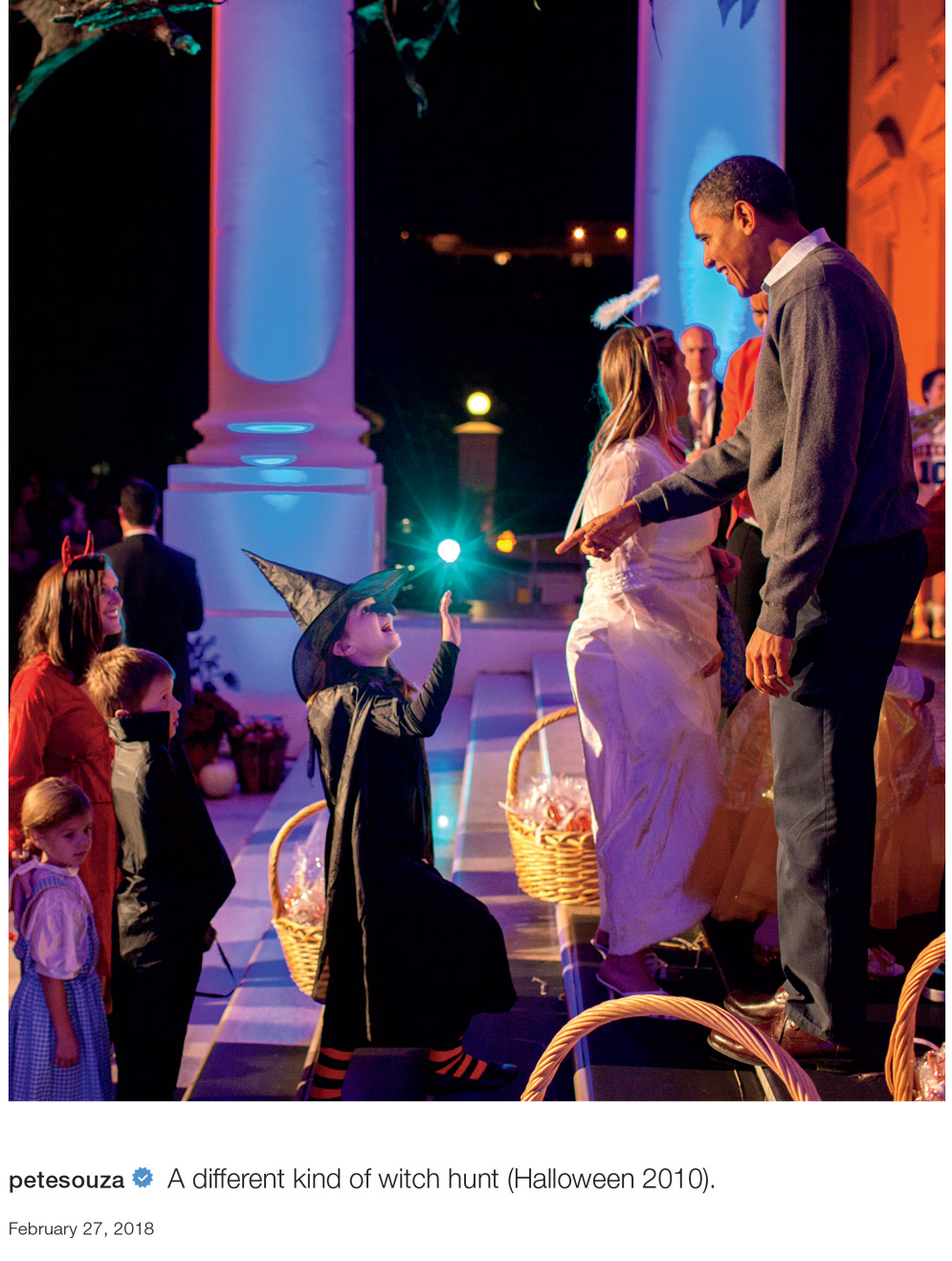 You get the idea. Souza will be at Porter Square Books in Cambridge on Thursday to sign copies of Shade. (There are some rules, and advance tickets are required: find details here and at the end of this story.)

BU Today spoke with Souza recently about his new book.

BU Today: Do you feel any better after the midterms?
Souza: It’s good the Dems took the House and some governor’s races. Until now there hasn’t been any branch of government that could keep a check on Trump and things he’s doing which are knowingly illegal. The Republicans just look the other way. But until we make a change in the president, I’m not going to feel that good at all.

Last year you were reluctant to talk about your Instagram feed. What changed?
It’s the constant lies and bullying and scare tactics of the president. I finally saw that I needed to speak out a little more vocally, that it was my civic duty, and that I have a unique voice that could contribute something—still mostly in a humorous way—about how disrespectful this guy is to the presidency by his almost daily antics.

Why did you begin with the quote about the birth certificate?
I made that choice because that is what started Trump’s political career and started him getting all this media attention. Every time he would speak about that, the cable channels and Fox News would cover it and give him prominent airtime. Where it was just a bunch of bull—. And he knew it was bull—-, but he also knew it would get a lot of attention. And that’s the way he operates. He wants attention. 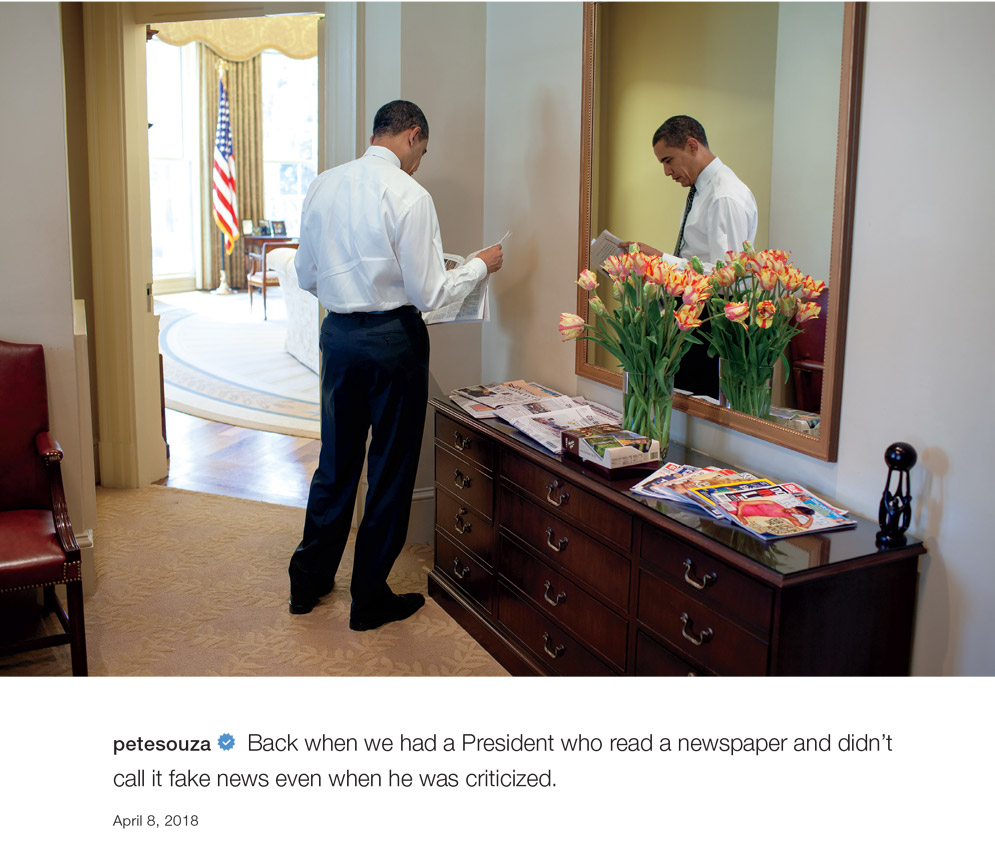 Many Democrats, and others, found your first book moving. What has been the reaction to this one?
Predominantly the same, but I think I’ve inspired some people to get involved in their community and to vote. There’s been an emphasis all across the country this year to get people out to vote, and I think I’ve had a tiny part in that. There’s a grassroots movement—you saw the record number of people who voted in the midterm. I spoke to a high school journalism conference the other day in Chicago; there were a few thousand in the audience, and I asked them, ‘How many of you will be 18 in 2020?’ and pretty much every single one raised their hand. And then I said, ‘How many of you are going to vote in 2020?’ and nobody put their hand down. I think there’s an awareness now of how important voting is.

Although the White House photographer isn’t a journalist, you approached the job like one. How do you feel about sharing your opinions now?
I think from the historical standpoint, you’ve never had a former White House photographer publicly criticizing the next president. I didn’t do this lightly. If it was Jeb Bush or Mitt Romney or McCain or Kasich or any of those guys who had become president, I wouldn’t be doing this. All of those people respect other people and respect the office of the presidency. What galls me about Trump is I think he disrespects the office of the presidency every day by the way he behaves and the things he says on Twitter, and he lies all the time and bullies people. I think it’s unbecoming of the leader of our country. And I just could not live with myself if I did not speak out. 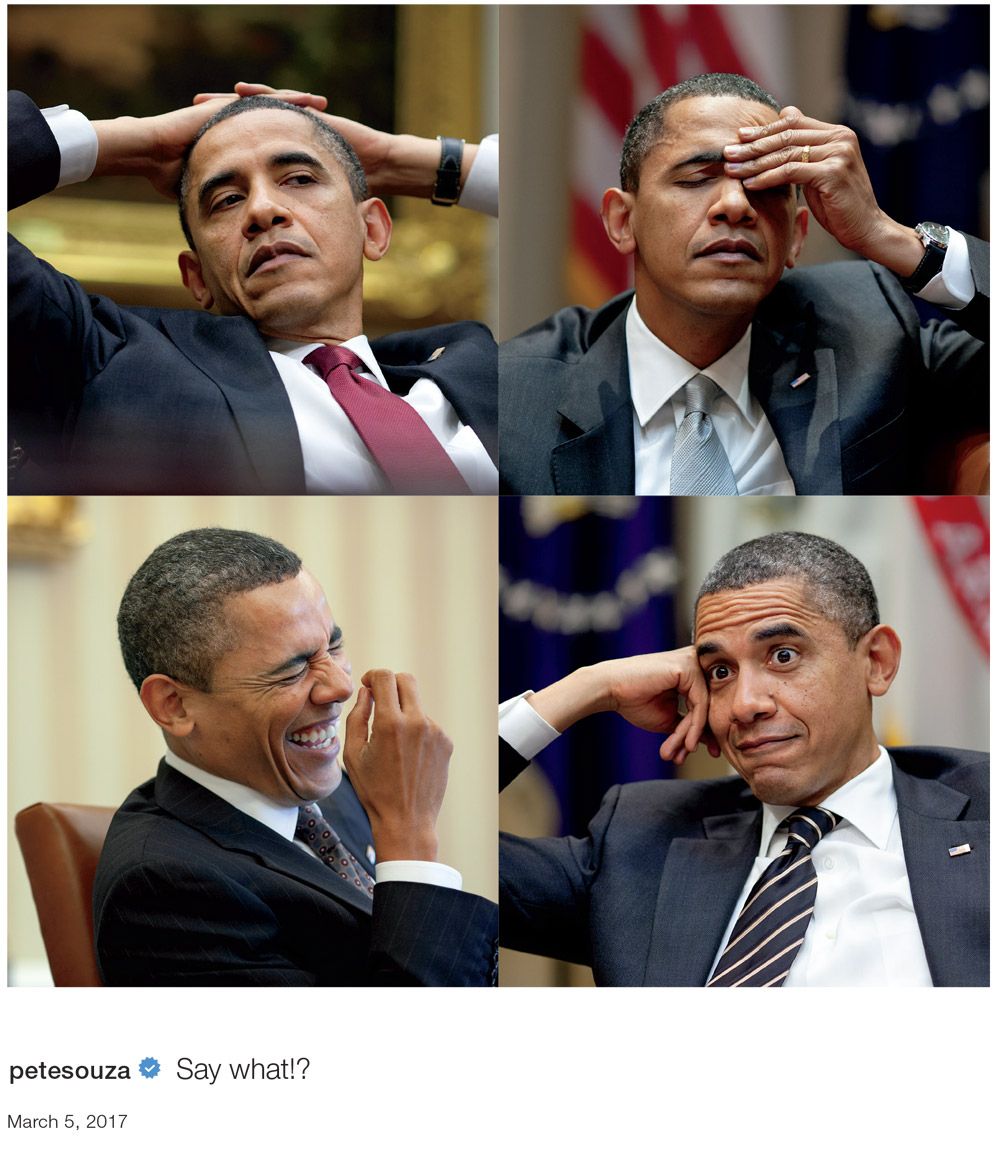 Have you heard from President Obama or anyone from his administration about the new book?
I’ve heard from lots of people that they find the Instagram account humorous and comforting and truth-telling as well. As far as the president goes, I have not really talked to him about this, because I didn’t want to put him or myself in the position where people thought this was something I was doing under his direction. I’ve seen him a couple of times and mainly we’re talking about family, how are his girls doing, things like that. We’re not talking about my Instagram feed at all.

How about the Trump side?
No, I don’t socialize. My travels would not necessarily be to the places they’re going.

Pete Souza will sign copies of his new book, Shade: A Tale of Two Presidents, on Thursday, December 13, at 5 pm at Porter Square Books, 25 White St., Cambridge. Tickets are required for the signing line—find one by scrolling down the store’s web page. One ticket is included when you purchase a copy of Shade ($30). Souza will be personalizing books. If you have Obama: An Intimate Portrait, he’ll sign one copy per person.