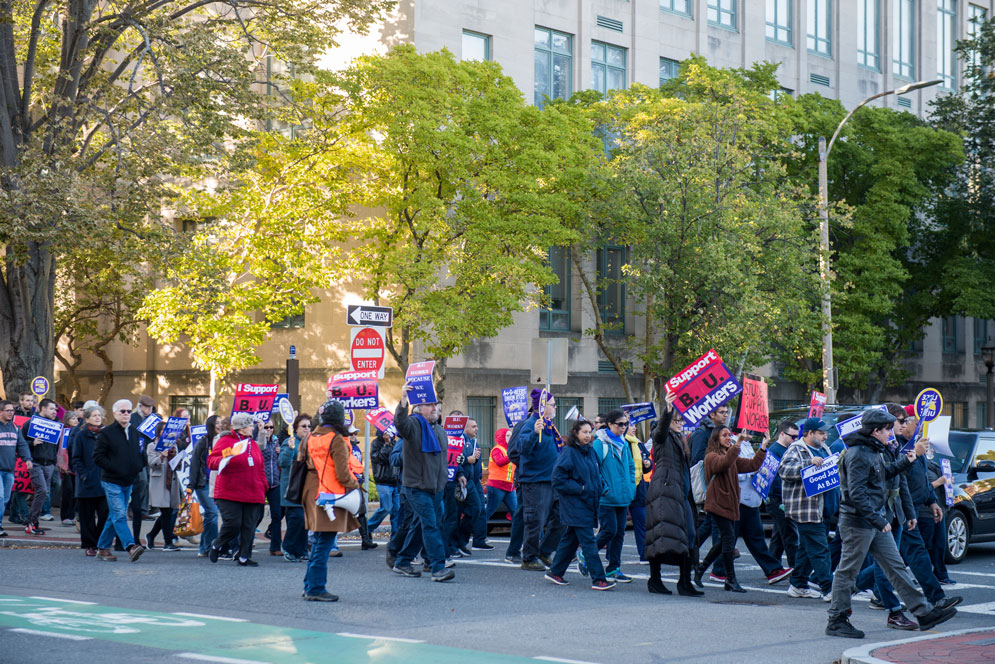 BU custodial and skilled trade workers may walk off the job if their union can’t reach a new contract with the University. Photo by Cydney Scott

For the second time in four years, BU custodial, maintenance, skilled trade, and mail employees are warning of a possible strike if their union and the University cannot agree to a new contract.

The current contract expires on midnight Wednesday, October 31. Local 32BJ of the Service Employees International Union (SEIU), which is bargaining for the 725 BU workers, says its members voted to authorize a strike if a deal isn’t reached by the deadline. The vote doesn’t guarantee a walkout, but gives union negotiators “authorization to call a strike if the negotiations break down,” says Amity Paye, communications director for Local 32BJ.

The union negotiators could hold off on a strike even if the deadline passes if they believe they and the University are within striking distance of a contract agreement, Paye says.

“The predominant sticking point right now is health insurance,” she says, with BU seeking to put the employees in the same health plan that covers all other University employees. The union now has a health maintenance organization (HMO) plan.

Gary Nicksa, BU senior vice president for operations, says that during contract negotiations in 2014, “the University and union agreed to extend the old HMO plan for the term of the contract,” since BU had not yet announced changes to its health insurance offerings. At that time, Nicksa says, the union agreed that when a new contract was negotiated in 2018, its members would enroll in the new PPO offered to all BU employees.

“Our Facilities employees enjoy great jobs with great benefits, including health care, tuition remission, and numerous others,” says Judi Burgess, BU’s director of labor relations. “The large majority of our unionized Facilities employees have many, many years of service to the University, for which we are truly grateful.” (University officials say the BU tuition remission benefit for employees’ dependent children, 100 percent for those hired before 1995, 90 percent for those hired after that date, is unusually generous compared to other universities.)

“Our full-time custodial workers,” Burgess adds, “are among the highest paid custodians in the city of Boston, with outstanding benefit offerings.” Custodians at BU currently earn $24.76 an hour, more than their counterparts at Boston College, Harvard, the Massachusetts Institute of Technology, Bentley, and Wellesley.

The average custodian will make more than $58,000 this year with overtime and “other premium pay,” Nicksa says.

Trade staff employees (carpenters, electricians, plumbers, and HVAC mechanics) now make between $78,900 and $82,100 annually. The average trade staff employee will earn more than $100,000 this year with overtime and premium pay.

“We have always offered the same benefits to all BU employees, union and nonunion,” Nicksa says as well, including medical insurance; employer contributions to retirement plans, up to 12 percent of pay; paid holidays, vacations, and sick time; and tuition remission for both employees and their dependents.

If the workers strike, he says, the University is prepared to continue operations, limit disruptions, and update the BU community about developments.

All classes on the Charles River, Fenway, and Medical Campuses would run as scheduled. University offices would remain open, whether or not picket lines form in front of them. The law allows strikers to picket on public property outside of BU workplaces as long as they don’t impede entrances and exits to classrooms and other buildings.

The BU Police Department would keep public order during any picketing and protesting. The union has had several campus rallies in the run-up to the contract deadline, all without incident, says Kelly Nee, BU chief of police.

There would be no strike-related disruptions to food service, and all dining facilities and libraries and FitRec would stay open. All events would go on as scheduled.

In 2014, down-to-the-wire negotiations averted a strike: workers ultimately received a new contract, with a 10 percent raise over the contract’s four-year life. As part of the deal, the union scrapped a demand for a freeze on workers’ contributions to healthcare premiums. The negotiators shook hands on the deal at 10:30 pm on the eve of the old contract’s last day.

The SEIU has represented the University’s service and maintenance employees since 1951, and during that time the union has struck only twice. This is the second contract negotiation with the SEIU’s New York–based Local 32BJ representing the workers. It’s a larger local than the BU employees’ previous one, giving workers added bargaining power, the union has said.

Custodial and Trade Staff May Strike over Pay, Health Benefits

There are 15 comments on Custodial and Trade Staff May Strike over Pay, Health Benefits

Custodial and Trade Staff May Strike over Pay, Health Benefits
15
share this