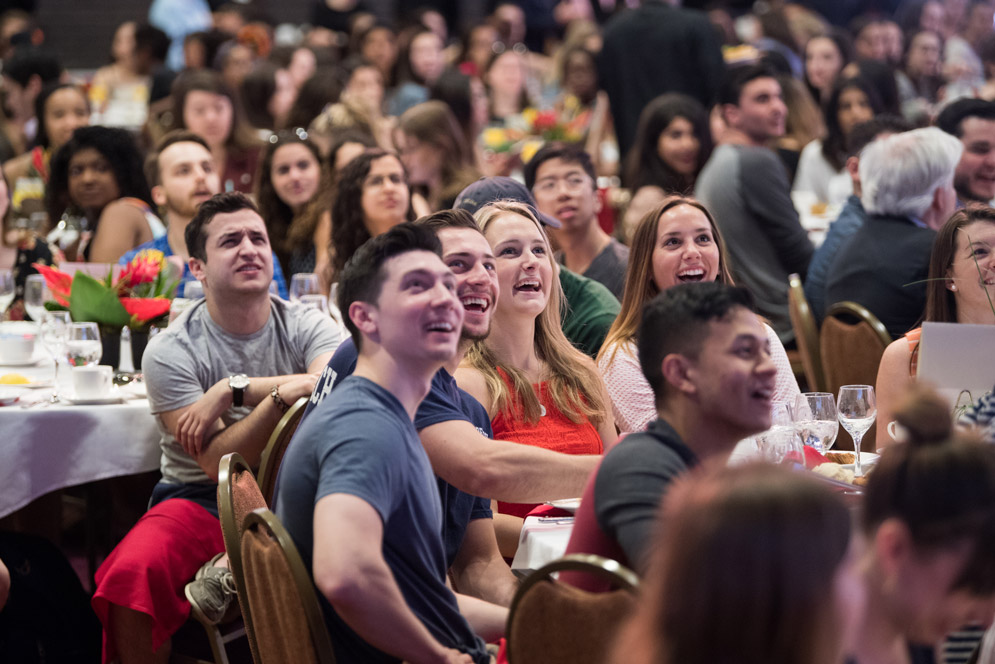 Members of the Class of 2018 reacted enthusiastically to the announcement that longtime civil rights activist US Representative John Lewis (D-Ga.) will speak at BU’s 145th Commencement on May 20. Photo by Cydney Scott

Civil rights icon John Lewis, a member of the US House of Representatives since 1987, will deliver the 145th Commencement address on Sunday, May 20, on Nickerson Field.

BU President Robert A. Brown announced Lewis as the Commencement speaker at Thursday’s Class of 2018 Senior Breakfast at the George Sherman Union Metcalf Ballroom, where more than 2,500 soon-to-be graduates noshed on tarts, sausages, scones, muffins, and fruit. Songs like Pharrell’s “Happy,” Katy Perry’s “Dark Horse,” and Ariana Grande’s “Break Free,” and a slideshow of pictures of the seniors from the last four years brought some nostalgia.

Brown also revealed the winners of the University’s highest teaching honors. This year the top honor, the Metcalf Cup and Prize, goes to Brooke Blower, a College of Arts & Sciences associate professor of history. Elizabeth Co, a CAS senior lecturer in biology, and James A. Wolff, a School of Public Health associate professor of global health, are the recipients of the Metcalf Awards for Excellence in Teaching. The three faculty members will be honored at the Commencement ceremony.

Born the son of sharecroppers in Jim Crow Alabama, the 78-year-old Lewis was a major leader in the Civil Rights Movement. He organized sit-ins at segregated lunch counters, participated in Freedom Rides, organized voter registration drives, was chairman of the Student Nonviolent Coordinating Committee (SNCC), and gave a keynote address at the 1963 March on Washington. He headed up the 1965 “Bloody Sunday” march across the Edmund Pettus Bridge in Selma, Ala. The march ended with peaceful protesters brutally attacked by police officers, leaving Lewis with a fractured skull. The incident garnered headlines worldwide and helped lead to passage of the Voting Rights Act of 1965.

Despite more than 40 arrests, physical attacks, and serious injuries, Lewis has remained an advocate of nonviolence. After leaving SNCC in 1966, he was active in the Field Foundation, the Southern Regional Council, and the Voter Education Project and was appointed by President Jimmy Carter to direct the ACTION federal volunteer agency.

He has received numerous awards, including the Presidential Medal of Freedom, the highest civilian award in the United States. Lewis was elected to the Atlanta City Council in 1981 and was elected to the US House of Representatives in 1986.

Fauci is one of the world’s most influential and accomplished scientist-physicians and has greatly contributed to the understanding of HIV and AIDS throughout the world.

He has directed the National Institute of Allergy and Infectious Diseases (NIAID) at the National Institutes of Health since 1984, where he oversees extensive research on infectious diseases and diseases of the immune system. He is also chief of the NIAID Laboratory of Immunoregulation—a field he helped pioneer—where he has made countless important discoveries related to immune-mediated and infectious diseases. Fauci has advised five US presidents on HIV/AIDS as well as several other domestic and global health issues. He is a recipient of the National Medal of Science and the Presidential Medal of Freedom, among other honors.

Cruz first gained international attention last September in the wake of Hurricane Maria, the worst natural disaster to hit Puerto Rico and the Commonwealth of Dominica. While mobilizing the island’s scant remaining resources, she advocated relentlessly on behalf of the Puerto Rican people, facing down government bureaucracies that were often inefficient and seemed at times uncaring. Her repeated insistence that “This is not about politics; this is about saving lives,” resulted in many nongovernmental organizations and private companies supporting the recovery effort.

The BU alum is a former member of the Puerto Rico House of Representatives and is an active advocate for immigrants, the LGBTQ community, the deaf community, children with functional diversity, and those who have struggled with gender-based violence. She was recently named to Time magazine’s “100 Most Influential People of 2018” list. For her humanitarian work, Cruz has been recognized with the Martin Luther King, Jr., Center’s Humanitarian Leadership Award and the AIDS Healthcare Foundation Humanitarian Award.

In Bakshi’s 2015 film Daughters of Mother India, the filmmaker and journalist shone a light on gender violence in India. In 2017 the Global Creative Index named the documentary the Most Awarded Social Campaign in the World. It also won the President’s Award for Best Film on Social Issues at the National Film Awards, India’s highest film honor, as well as earning two Cannes Lion nominations.

Two earlier socially conscious films by Bakshi—Too Hot Not to Handle, an HBO documentary about climate change, and Terror at Home, part of the Emmy-winning Stop the Violence Against Women campaign—have also met with wide acclaim. Her latest film is SON RISE, which is inspired by the HeforShe mandate, which stresses that gender equality can only be achieved if men and boys are part of the struggle. Bakshi founded Responsible Films, where she produces and directs socially conscious films and campaigns.

Zhang is a leading Chinese filmmaker who has earned international kudos and commercial success. After beginning his career as a cinematographer and actor, he made his directorial debut in 1987 with Red Sorghum, followed by Ju Dou in 1990—the first Chinese film nominated for an Academy Award for Foreign Language Film—and Raise the Red Lantern in 1991. He has also directed two operas, Turandot and The First Emperor, and a ballet adaptation of Raise the Red Lantern. Six of his films have been nominated for Oscars in various categories and five have been nominated for Golden Globe Awards for Best Motion Picture–Foreign Language. Zhang has also received several lifetime achievement awards.

At the breakfast, event emcee Kenneth Elmore (SED’87), associate provost and dean of students, welcomed the 2018 Class Gift cochairs, Nebe Betre (COM’18) and Kaitlin Geraghty (CAS’18), who thanked the graduating seniors for their generosity. More than 2,200 students from the Class of 2018 have supported over 100 different funds so far, and these seniors are scrambling to break the record for the most philanthropic graduating class in BU history (the Class of 2017 currently holds the record, with more than 2,850 donors).

Brown reminded the seniors of some of the milestones they experienced, like their first year on campus, when Boston had a wild winter and multiple snow days. “BU today is different than the BU people went to 25 years ago, and you’ve seen some significant physical changes to the institution,” Brown said, citing the record-breaking $115 million gift from Rajen Kilachand (Questrom’74, Hon.’14) and the new Rajen Kilachand Center for Integrated Life Sciences & Engineering and the opening of the Joan & Edgar Booth Theatre.

“I do hope you come back. The Castle will not be wrapped in red by the fall, and we will have the first alumni center on campus,” Brown said. “Stay connected with us—we’re all on a journey. You’re launching your journey in two weeks, and this institution, too, is on a journey.”

One of the last speakers was Joanne Lee (SED’17, CAS’17, MET’19), who now works for the Boston chapter of the College Advising Corps, a nonprofit that strives to increase the rates of college enrollment and completion among low-income, first-generation, and underrepresented high school students. She welcomed the Class of 2018 as new members of the BU Alumni Association and offered tips on what she has learned as a newly minted college grad: “Don’t forget to take time for yourself…invest in worthwhile relationships…find people that challenge you and make you see things from another perspective…stay involved in BU in the years ahead…and don’t sweat the small stuff.”