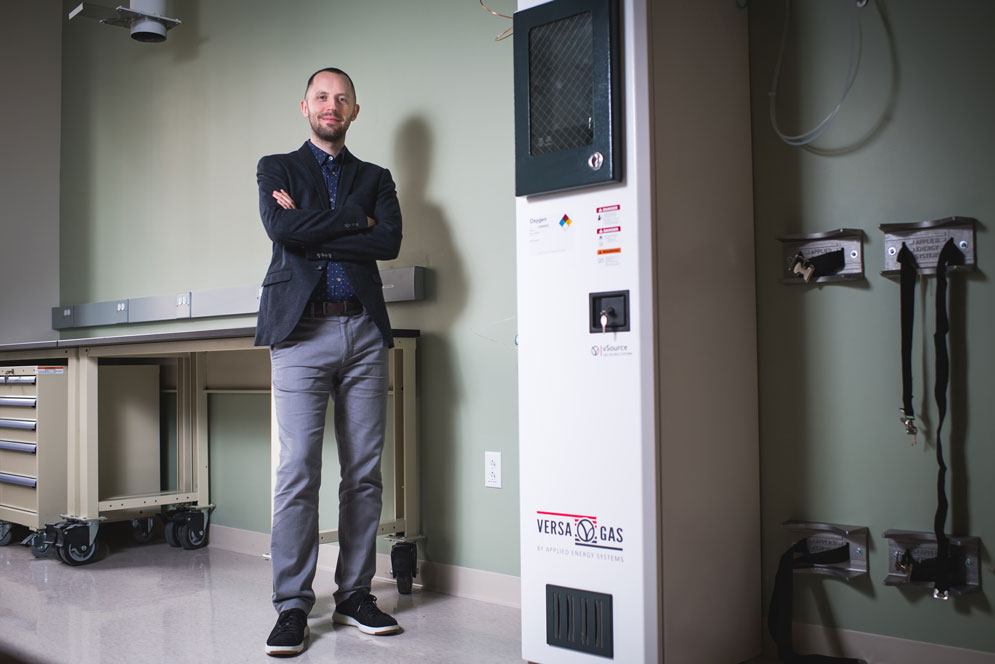 Geddes, a College of Arts & Sciences assistant professor of earth and environment, has been awarded $693,000 over five years by the National Science Foundation (NSF) and $280,000 over three years by the National Aeronautics and Space Administration (NASA). The funding will allow him to expand his use of satellite-based remote sensing observations, computer modeling, and targeted field observations to study the impact on air quality in North America of the interaction between natural emissions from the biosphere and those caused by human activities, such as burning fossil fuels.

“I’m investigating what determines how important the biosphere is going to be on any given day or in any given year,” says Geddes. “We need to be able to predict it, to actually quantify its impact.”

The interaction between biogenic and anthropogenic emissions is not well understood, and the National Academies of Sciences, Engineering, and Medicine has identified it as an important area of research for atmospheric chemists. Geddes says a greater knowledge of how this interaction works will lead to a better understanding of air quality and how best to regulate it.

Air pollution is the world’s biggest environmental health risk, blamed for millions of deaths and trillions of dollars in health and welfare losses. Long-term exposure to polluted air has been linked to respiratory infections, chronic obstructive pulmonary disease, stroke, heart attack, and lung cancer. While federal regulations have helped to improve air quality in the United States in the last several decades, there are still parts of the country where pollution is considered a substantial public health hazard.

A 2017 study by the Harvard T. H. Chan School of Public Health found that even at levels below what the EPA deems as safe, day-to-day increases in a pollutant known as fine particulate matter—particles of soot and other materials so small they can easily enter the lungs and bloodstream—are associated with increased deaths among the elderly.

“Jeff is doing exciting and pioneering research in the incredibly important area of air quality,” says Mark Friedl, a CAS professor of earth and environment and interim department chair. “He is trying to understand and characterize better an important part of atmospheric chemistry that is relatively little understood—how forests emit organic molecules, how these emissions are transported in the atmosphere, where they go, and what their impact is.”

Geddes is part of a group of pioneering researchers whose combined use of satellite and field observations, computer modeling, and other tools “allows us to monitor the quality and character of air in a much more robust and comprehensive fashion,” Friedl says. “Any improved data observations and models that help us understand how the chemistry and character of the atmosphere is changing gives us hard evidence for why we need these regulations.”

Geddes says he will use the NSF and NASA grants to investigate the variability of the biosphere, which causes the magnitude of natural emissions to vary from year to year, either because of extreme weather conditions, earlier or later leaf-out of trees, or land use. The changing magnitude of those emissions can have an impact on air quality, he says.

How this process works—how it changes seasonally and how it is affected by the weather and by human-caused pollution—is one of the key questions for atmospheric chemists today.

The NASA grant will fund his study of air pollution in the city of Boston, with a network of highly sophisticated NASA-designed air quality monitoring instruments placed in congested traffic areas, near the airport, on the BU campus, near an urban park, and elsewhere. He will combine data from these instruments with information from satellite-based observations.

The two awards will also allow Geddes to expand his research group, develop ways to educate BU students—as well as the broader public—in atmospheric chemistry data literacy, and create new atmospheric science courses for his department. He says he will create opportunities for graduate students to work with the city of Boston on issues related to improving air quality.