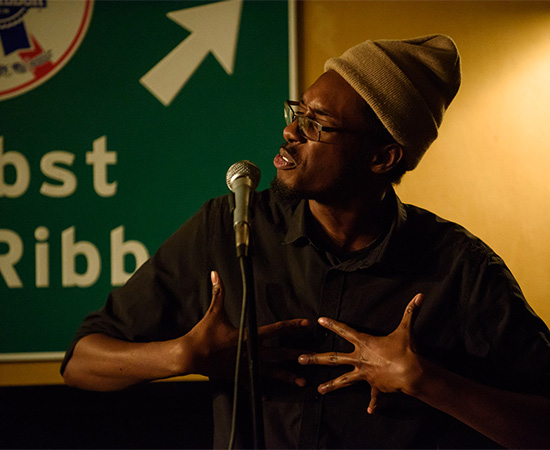 Every Wednesday, poets and fans of poetry come from all over the Boston area to the Cantab Lounge in Cambridge for the Boston Poetry Slam. The aim of the weekly event is to promote new voices in performance poetry and to bring poetry to as wide an audience as possible. Over its more than two decades, the slam has become one of the area’s hottest literary events. It runs from 8 pm to midnight, beginning with a two-hour open mic, followed by a half-hour reading by a featured poet, and an invitation-only “Last Chance” speed slam poetry performance. Poets must sign up in advance for the three-minute-limit open mic session. It’s best to arrive early, as the downstairs can fill up quickly. (Note: the room is not wheelchair-accessible).

Tonight’s featured poet, 23-year-old Boston native Evan Jymaal Cutts, is a poet, journalist, and writing workshop facilitator, whose poetry, according to the Slam website, “navigates expressions of Blackness, Boston, narrative, and magic.” His work has appeared in numerous publications: Broken Head Press, Apogee Journal, Voicemail Poems, Maps for Teeth, and The Merrimack Review. Cutts was a member of the Emerson College 2017 CUPSI Team and the 2017 National Poetry Slam “Last Chance Slam” Team. He stumbled upon the Boston Poetry Slam during a Google search in 2013.

The Boston Poetry Slam is tonight, Wednesday, May 30, at Downstairs in the Underground at the Cantab Lounge, 738 Massachusetts Ave., Central Square, Cambridge. The slam begins at 8 pm, doors open at 7:15 pm. All show are 18+ only and photo IDs are required. The cover charge is $3 at the door, and the bar is cash only. The show frequently sells out, so it’s best to get there early. Take an MBTA Red Line train to Central Square. Learn more here.

Alex Pena can be reached at alexgp97@bu.edu.