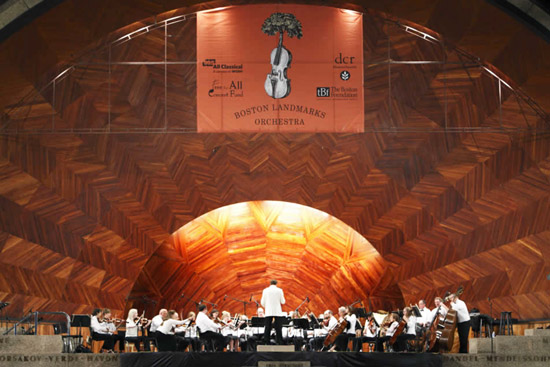 Classical music lovers, take note: the Boston Landmarks Orchestra (BLO) kicks off its 2018 season of free outdoor summer concerts on the Charles River Esplanade tonight with a program of music inspired by the heavens.

For more than a decade, the BLO has been performing free concerts each Wednesday night from mid July through August at the Esplanade’s Hatch Shell. Many of the Boston area’s best professional musicians play in the orchestra, which is known for its inclusive repertoire and community outreach. The summer concerts attract thousands of visitors each week.

Tonight’s season opener will feature a performance of Gustav Holst’s The Planets. This year marks the centennial of the first performance of the orchestral suite, at the Queen’s Hall in London. The suite, with seven movements, each named for a different planet, explores the astrological influence of the planets on human behavior. For the centennial, the BLO will perform with London’s St. Paul Girls’ School Choir. Holst wrote the piece’s dazzling finale for the choir when he was the school’s music director.

Also on the program will be the world premiere of Pegasus Promenade by Venezuelan-born composer Gonzalo Grau, a Berklee College of Music graduate. It will be performed by the young musicians from Zumix, an East Boston–based nonprofit dedicated to using music to help adolescents make positive change in their communities. Rounding out the concert will be a performance of two beloved pieces of classical music, Claude Debussy’s Claire de Lune (also inspired by the heavens) and the first march from Edward Elgar’s magisterial Pomp and Circumstance. The concert will be led by BLO director Christopher Wilkins.

The next 2018 BLO Hatch Shell concert is a celebration of music by Leonard Bernstein in honor of the centennial of his birth, on July 25 (no rain date). The concert will be a collaboration with the gifted teenage musicians enrolled in BU’s Tanglewood Institute. The remaining concerts: a performance of Giuseppe Verdi’s moving Requiem on August 1 (rain date August 2); the annual performance by the Longwood Symphony Orchestra, Boston’s medical community orchestra, on August 8 (no rain date); Sounds of the Sea, a concert in collaboration with the New England Aquarium, on August 15 (rain date August 16); Symphonic Dances, which will feature ballet music from Tchaikovsky’s Swan Lake, along with a performance by Boston Ballet II, on August 22 (rain date August 23); and a return appearance by the Cambridge, Mass.–based Mercury Orchestra playing a program of Russian music, on August 29 (no rain date).

The Boston Landmarks Orchestra performs tonight, Wednesday, July 18, and every Wednesday through August 29, at the Hatch Shell, at 7 pm. All concerts are free. In the event of rain, tonight’s concert will be held tomorrow night, Thursday, July 19, at the Hatch Shell. If it rains on July 19, the concert will be held at First Church Cambridge, 11 Garden St., Cambridge, Mass. Rain information will be posted beginning at 4 pm on concert days. Find directions to the Hatch Shell here, information about cancellations here, and a complete list of BLO concerts here.

Music Inspired by the Heavens Tonight on the Esplanade