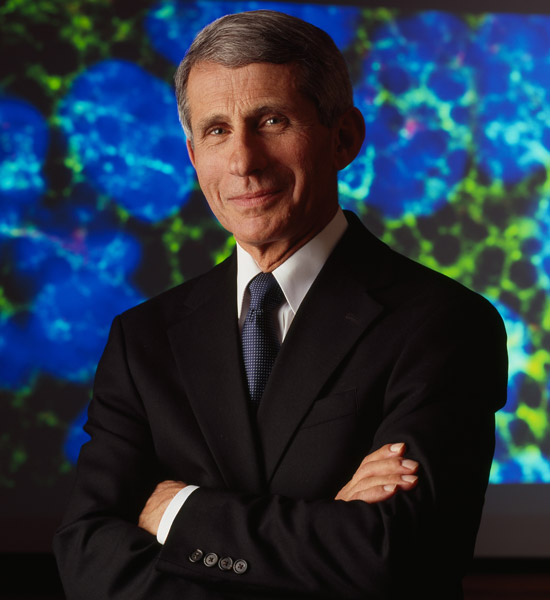 Anthony S. Fauci, director of the National Institute of Allergy and Infectious Diseases (NIAID) at the National Institutes of Health since 1984, is one of the world’s most admired scientist-physicians. He has served under six presidents and led the country through the darkest days of the AIDS pandemic. Fauci was one of the principal architects of the President’s Emergency Plan for AIDS Relief, a program that has saved millions of lives in the developing world.

On May 20, at BU’s 145th Commencement, the University will confer a Doctor of Science on Fauci.

Even in Washington, D.C., a city of workaholics, Fauci is famous for his 16-hour workdays. In 2008, when President George W. Bush awarded him the Presidential Medal of Freedom, he noted that Fauci “sometimes forgets to stop working.” Bush joked about the notes on Fauci’s windshield from coworkers: “Go home, you’re making me feel guilty.”

And in an age when tweets and angry talk show rants pass for dialogue, Fauci stands out for his communication skills. Whether it involves testifying before Congress about the need for research funding or talking about Ebola on national television, he can make complicated science comprehensible. The goal, he says, is not to appear smart. It is to be understood.

In 1984, when a mysterious plague called AIDS was devastating the gay community and Anthony Fauci was the new NIAID director, he did something that was viewed by the scientific establishment as radical and ill-conceived: he met with AIDS activists.

Confronted with a deadly disease that at the time had no treatment, the activists wanted input into the regulatory process around drugs and clinical trials. “Most scientists were afraid of them,” Fauci says. “They wouldn’t listen to them.” Desperate to be heard, the activists stepped up their demonstrations across the country. They shut down Wall Street, set off smoke bombs on the NIH campus in Bethesda, Md., and hanged Fauci and other health officials in effigy.

“The activists were in great pain” Fauci says. “They had a disease that was associated with a disenfranchised population—gay men, injection drug users, commercial sex workers. They were saying, ‘Wait a minute, you’ve got it wrong. We’re going to live an additional few months to a year and a half and you’re talking about a process that’s going to take years. You’ve got to reexamine the paradigm.’”

He invited a group of AIDS leaders to meet with him in his office. “No one had ever spoken to them—forget about inviting them to their office,” he recalls. “That’s where the dialogue began. It continues to this day.

It was “one of the best things I’ve ever done,” he says.

Fauci, whose parents were the children of immigrants, grew up in Brooklyn’s Bensonhurst section, in an apartment above his pharmacist father’s drugstore. As a boy, he delivered prescriptions on his bike. He credits his parents—and his Jesuit education, at Regis High School, in New York City and at the College of the Holy Cross, where he earned a bachelor’s degree—with his lifelong interest in public service.

His parents believed in making a contribution to society and “were never, ever interested in worldly things,” he recalls. “They were never concerned at all with money. When I was a kid, it used to get me a little annoyed.”

As NIAID director, Fauci oversees research to diagnose, prevent, and treat HIV/AIDS and other infectious diseases, such as malaria, tuberculosis, and Ebola. He is also chief of the NIAID Laboratory of Immunoregulation—a field he helped pioneer—where he has made numerous important discoveries related to immune-mediated and infectious diseases. He is a key advisor to the White House and the Department of Health and Human Services on global infectious disease issues. His awards include the National Medal of Science, and the Mary Woodard Lasker Award for Public Service, and he serves on the editorial boards of numerous scientific journals, delivers major lectures around the world, and is the author, coauthor, or editor of more than 1,300 scientific publications. A 2017 analysis of Google Search citations ranked him as the 24th most-cited researcher of all time.

At 77, Fauci no longer runs marathons, but he says he still logs three or four miles a day. And he carves out time to see patients two days a week.

He continues to meet with AIDS activists. Just recently he invited two longtime activists, Peter Staley and David Barr, to his home for dinner, where they talked about the lack of availability of a drug that helps to prevent HIV infection—and their concerns that AIDS is no longer receiving sufficient attention.

“I cooked them a sausage and rigatoni meal,” Fauci says. “We sat down and had a bottle of wine and spoke until the wee hours of the mornings. It was just like in the 1980s.”