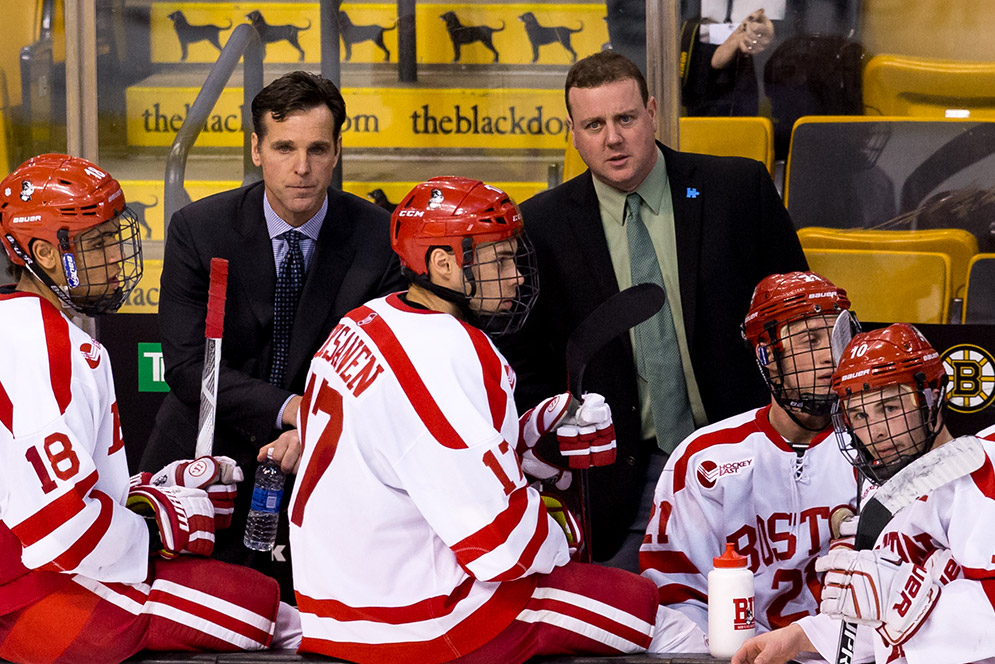 Albie O’Connell (CAS’99) (standing, right), then associate head coach, and head coach David Quinn (CAS’89) with their Terrier players during a timeout vs Northeastern in the 2016 Beanpot semifinal at the TD Garden. Photo by Rich Gagnon

BU Hockey didn’t have to look far for its new men’s head coach. The job goes to Albie O’Connell, associate head coach under David Quinn and a four-time Beanpot winner as a Terrier player.

As the 12th head coach in program history, O’Connell (CAS’99) replaces Quinn (CAS’89), who left in May after five years to take over as bench boss for the New York Rangers.

“We aspire to have the best program in college hockey,” said Drew Marrochello, director of BU Athletics, announcing O’Connell’s hiring Tuesday, “which means that we want nothing less than the best for our University, our alumni, our fans, and most important our student-athletes. In promoting Albie, we believe we have secured the best possible coach to lead our program at its elite level for many years to come.”

“Simply put, this is the opportunity of a lifetime,” said O’Connell, who will be formally introduced at a press conference at Agganis Arena Wednesday afternoon. “I’d like to thank Drew Marrochello, President Robert A. Brown, and Senior Vice President Todd Klipp for entrusting me with a program that means the world to me. BU has given me so much, and I want each player that puts on our jersey to feel the same way I do.”

Considered one of the NCAA’s top recruiters as a college coach, O’Connell returned to BU in 2014 as an assistant under Quinn and was named associate head coach before the 2015-16 season. He has helped develop numerous Terriers into NHL-ready talent, including Olympian Jordan Greenway (CGS’17, CAS’19) and All-Americans Jack Eichel, Matt Grzelcyk (COM’16), Charlie McAvoy, and Danny O’Regan (COM’16).

During the past four years with O’Connell on staff, the Terriers have qualified for the NCAA Tournament each season, the program’s longest streak since nine straight in the 1990s. After finishing as the national runner-up in 2015 and collecting the Beanpot and Hockey East titles, BU reached the NCAA quarterfinals in both 2017 and 2018 and is the defending Hockey East champion.

O’Connell graduated from BU with a bachelor’s degree in history. He lives in Duxbury with his wife, Kristen (Sargent’99), and their three children.

BU Hockey Veteran Moves Up the Bench
2
share this