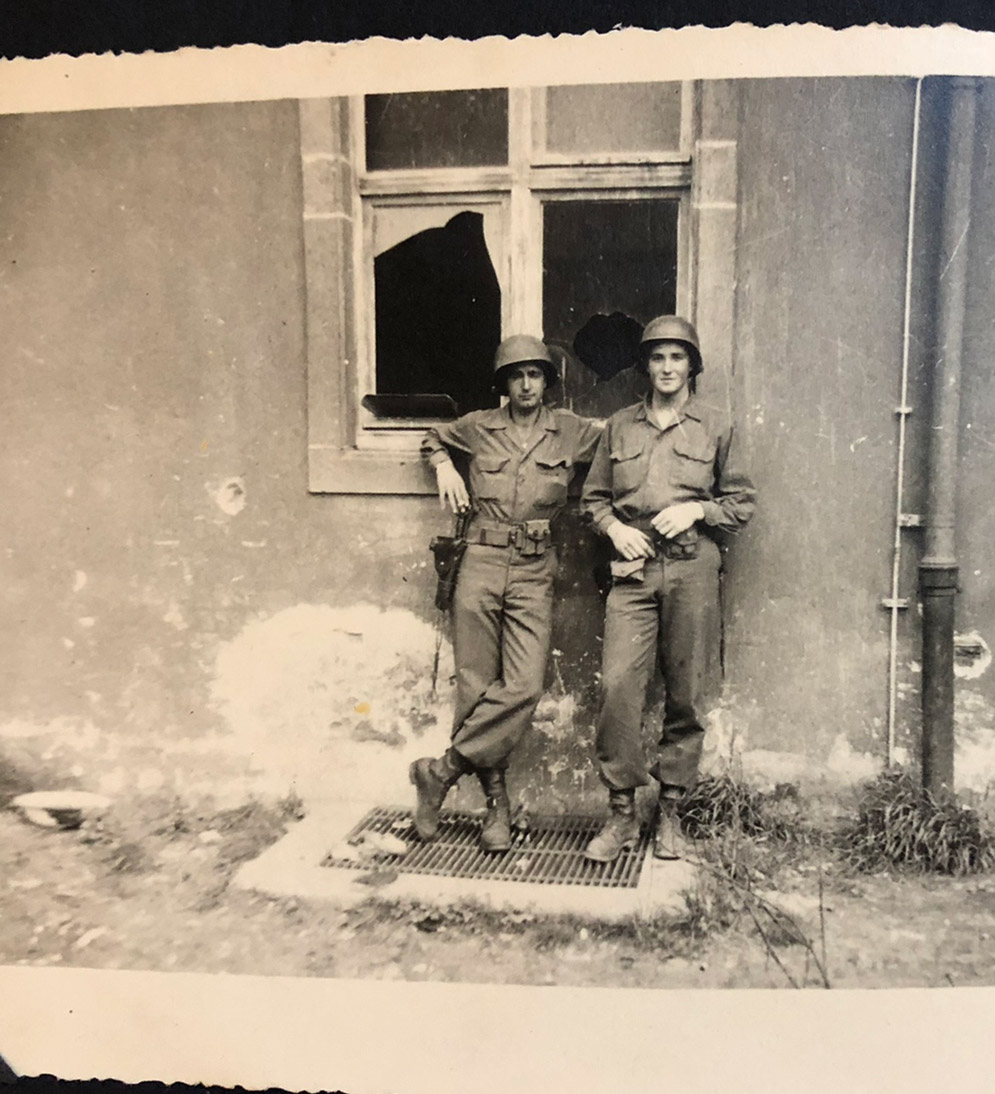 John Waller (right) and an unidentified comrade in wartorn France in early 1945.

It’s a true-life story that sounds like a Hollywood blockbuster.

In fact, Garland Waller has already made the movie—a documentary starring her 94-year-old father, John Waller—about her father’s guilty conscience and his return to Normandy, France, to set things right after nearly 75 years. Waller’s film, The Silent Soldier and the Portrait, screens tonight, as part of the BU Cinemathèque series, a College of Communication program that brings accomplished filmmakers to campus to screen and discuss their work.

“It’s made to be a [Hollywood] movie, and if you think I’m not moving on that front, you’re quite wrong,” says award-winning filmmaker Waller (COM’80), a COM assistant professor of film and television.

On Christmas Eve 1944, over 2,000 troops were aboard the SS Leopoldville, crossing the English Channel to join the Battle of the Bulge, when the ship was torpedoed by a U-boat five miles off Cherbourg, France. Private John Waller of the Army’s 264th Battalion walked down the side of the sinking ship and swam for his life in the darkness. He was saved, but more than 800 on board died. The tragedy of the Leopoldville was kept secret for fear of its effect on morale. Until a decade or so ago, few talked about it.

When Garland Waller was helping her father move in 2016, they came across a photo album of his time in France. For the first time, John Waller told her of his near-death experience and how he and his buddies later found an abandoned chateau ransacked by the Germans. He said they blew open a safe they found there and that he took a tiny painting from it, a watercolor portrait of a woman, dated 1813. Soon after, he and his friends were scattered across Europe, but he carried the palm-sized picture with him after that—a secret shame, as he considered it stolen property.

Garland Waller wanted to give her father closure, but at the same time, she has a nose for a good story. She and her husband, TV veteran Barry Nolan (Hard Copy, Evening Magazine), began filming her conversations with her father, and eventually, making plans to return to France with him last spring. The Silent Soldier and the Portrait is the result. Nolan was the main cameraman on the project, using iPads and iPhones, and he and Waller share directing credit.

BU Today spoke with Waller about her father’s wartime experience and the fate of the painting he had held close for nearly three quarters of a century.

BU Today: Can you share in more detail how the film came about?

Garland Waller: I was helping my father move, and I came across this battered brown photo album and there were all these pictures of him in the war. I said, ‘What’s this picture of this estate?’ And that’s when he told me about how when he and his army band of brothers were recuperating from almost losing their lives on Christmas Eve, they came upon this abandoned, ransacked chateau with bullets shot through the ceiling and nothing left except this safe. They were carrying hand grenades, and Army guys being what they are, they strung them together and blew the safe and divided up the contents. And the thing that he wanted was this portrait that he kept with him for over 70 years. 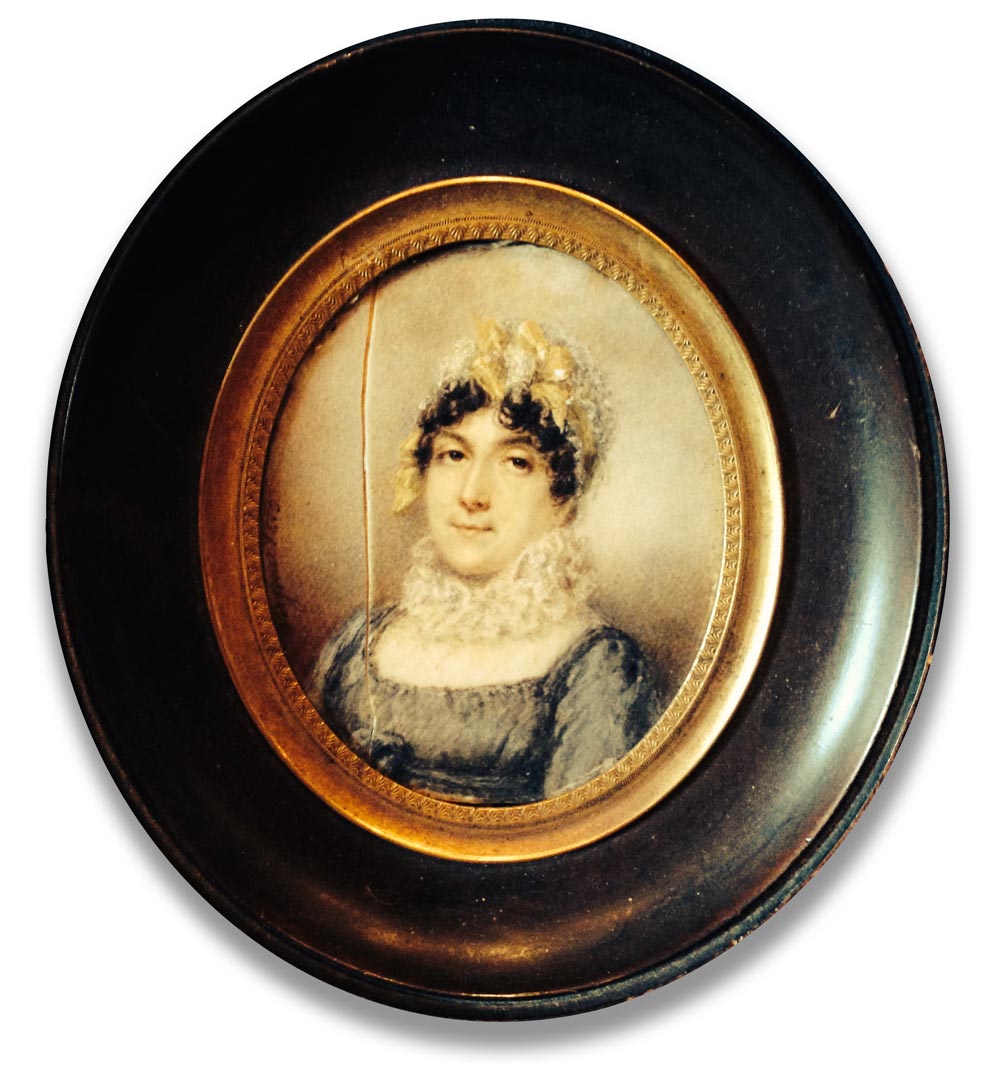 John Waller carried this 1813 miniature painting with him from 1945 until earlier this year, haunted by the fact that it was stolen property. Photo by Garland Waller

He felt guilty about this?

He felt really guilty about it. I said to him, ‘I have a feeling you’d like to take it back.’ And he said, ‘Oh, I’d love to take it back, but I can’t remember exactly where the estate was.’ And I said, ‘Maybe I can figure something out.’ That began a sort of detective story on my end.

How did you find the chateau?

I had this fabulous teaching assistant, Julia Bianco (COM’19), and she posted things on Facebook and Instagram and Google image search. And in all of this, we thought it was a photograph my father had taken of the estate. And we take it out of the album and turn it over, and there’s writing on the back. It was in French, and it was translated for us by Davina Mattox, a College of Arts & Sciences senior lecturer in French. It was written by someone who had taken the picture and mailed it to the people who lived at the estate in 1935. But it didn’t have the address. It just said “the beautiful Kerlegan,” but we were able to track it down after that.

Tell us about the ferry ride across the English Channel you took from England to France.

People in England and in France were so moved by a veteran coming back and following his footsteps that they just opened their hearts to us. This lovely man from Brittany Ferries called and said, “We will make sure we cross directly over the wreckage of the Leopoldville, and if you would like to toss a wreath…” It was really very emotional, this 93-year-old man, he almost died that night, and this was the first time he’d crossed the Channel since. And all these people on the ferry came to see him toss the wreath.

You introduced him to the family from the chateau?

That morning I finally told him we had found the chateau, and that the people whose parents had owned it would come to the inn where we were staying, and we would give them back the portrait and they would drive us to Kerlegan, near Lorient, France. He was really afraid they would be furious with him. They came and were these articulate, warm, gracious, funny brother and sister and the brother’s wife. They welcomed us with open arms. They could not have been lovelier. My father was really stunned. When we got there, he recognized where he had been dug in, and all those memories did come rushing back to him.

What else was in the safe?

There was money—which they all split. Nothing of consequence, more like petty cash. Dad also got two French dueling pistols, which he sold in the United States to buy my mother her small but very sweet wedding and engagement rings. Dad can’t remember what the other men took. They were sent to different corners of the war after that and never saw each other again.

What does it mean to you to share this experience with your dad and tell his story?

I love my dad. I have a wonderful, loving father who’s always been there for me. But he’s never kind of understood what I do, as a producer and all that. And with this project, he saw me working and shooting and writing. And then seeing the final movie, a real movie about him, he was so touched and so moved and he thanked me in the most beautiful, confirming way that I had tears in my eyes. I was so grateful to be recognized by my dad. It meant the world to me.

One more question. How do you blow a safe with grenades and not destroy what’s inside?

Well, there’s a crack in the picture.

The Silent Soldier and the Portrait screens tonight, Friday, December 7, at 7 pm, followed by a conversation with Garland Waller, at the College of Communication, Room 101, 640 Commonwealth Ave. The event, part of the BU Cinemathèque series, is free and open to the public.