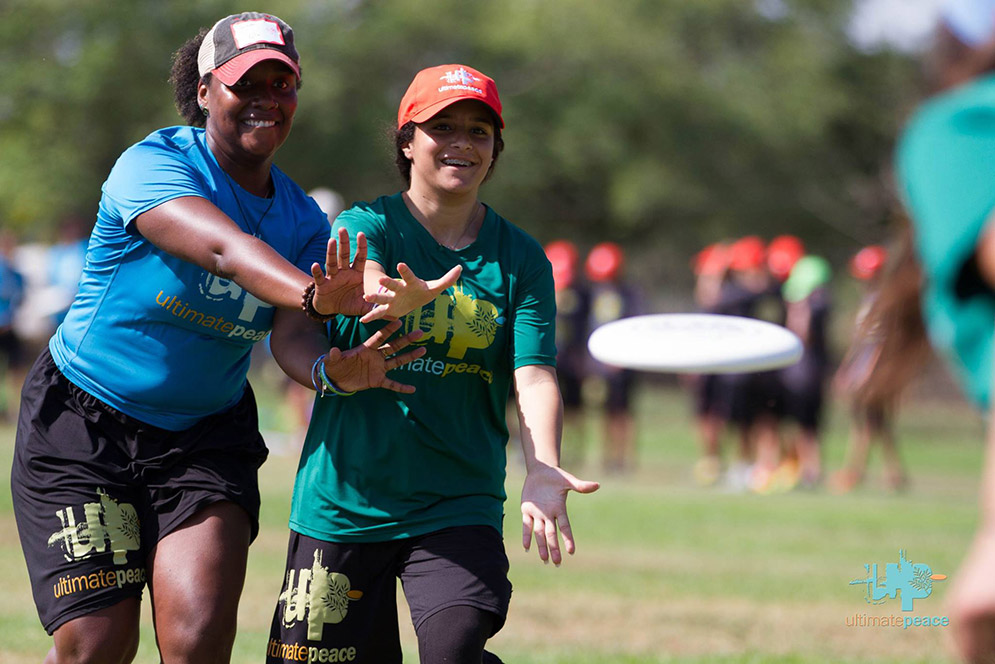 Just about everyone has tossed around a Frisbee for fun. Dana Dunwoody is doing it for peace. At a summer camp in an Israeli desert, she is using the flying discs to bring together Israeli and Palestinian youth—and maybe change the world, one toss at time.

“As youths, we get inundated with information about who we are and what our cultures are, and when there’s a lot of violence and hostility going on, there’s a lot of misinterpretation,” says Dunwoody (SED’19), a doctoral candidate in applied human development. “To be able to come together and realize, I can have a say in changing that narrative, is a very empowering experience.”

This is Dunwoody’s second stint as a volunteer counselor at the Ultimate Peace camp. Using the grounds of an Israeli boarding school for a week each summer since 2007, the organization strives to build ties between Israeli and West Bank youths. It does that with Ultimate, a game that’s extremely competitive, but depends heavily on teamwork and sportsmanship. The 200 or so 10-to-16-year-old campers come for the hours of practice and games each day. They have some fun away from the burdens of daily life in that conflict-wracked corner of the world, and if things go the way they are supposed to go, they begin to see one another differently.

“We encourage conversation and sharing of culture,” says Dunwoody, who has a bachelor’s in psychology from Temple University and a master’s in athletic counseling from Springfield College. “We have a lot of different activities the kids do together to create safe spaces to share their identities and explore other cultures.”

Mostly, though, there is ultimate.

Flying-disc sports are a lot more organized than they were in the peace-and-love days of the 1960s. Millions of people in the United States regularly play ultimate, which is not officially called Ultimate Frisbee because Frisbee is a Wham-O trademark. Long Island native Dunwoody picked it up as an undergrad and quickly became an avid player.

“You hear about these opportunities to use Ultimate culture as a way to connect people,” she says. Ultimate Peace, created by Ultimate-loving Americans and one Israeli, also offers a year-round program that brings Israeli and Palestinian youth together to play the game.

In Ultimate, the disc is advanced only by passing—players cannot run with the disc—and a team scores a point when one of its players catches the disc in the other team’s end zone. Most important, as far as Ultimate Peace is concerned, there is no referee, so players must call their own fouls.

According to USA Ultimate’s “Ultimate in 10 Simple Rules,” “Ultimate stresses sportsmanship and fair play. Competitive play is encouraged, but never at the expense of respect between players, adherence to the rules, and the basic joy of play.”

“The spirit of the game infiltrates all parts of your being,” says Dunwoody. “For me it feels like it’s alive. Every person manifests it in the way they communicate with you on and off the field. At Ultimate Peace, it’s mutual respect, but it’s also integrity and collaboration and cooperation.”

“The Ultimate Peace project is an example of sport for good, or sport for development, which is kind of an emerging field,” says Dunwoody’s faculty advisor John McCarthy (SED’98, SED’04), a School of Education clinical associate professor and director of the Institute for Athletic Coach Education. “These projects hold so much promise in areas where a lot of people have struggled and there are some really deep societal problems.”

“Dana’s very committed to social justice,” McCarthy says. “This project brings together a lot of her passions: social justice and her energy for using sport and exercise as a vehicle for positive change and just her kind of caring for other people.”

None of which surprises McCarthy. Dunwoody is SED’s first Holmes Scholar, and was elected national president of the program for 2017 to 2019. The Holmes Scholar Program, which is overseen by the American Association of Colleges for Teacher Education provides mentorship, peer support, and professional development to students from historically underrepresented backgrounds.

“She’s a bright light,” McCarthy says. “She can do a lot of good for a lot of people.”

There are 3 comments on SED Student Helps Bring Israeli, Palestinian Youth Together