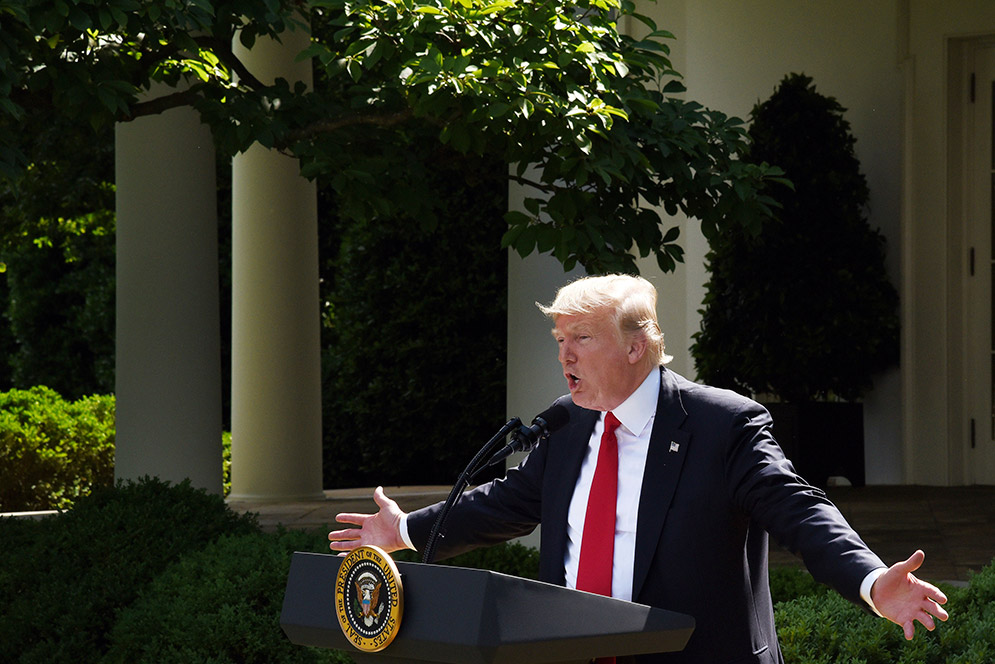 Donald Trump announcing June 1 that the United States would withdraw from the Paris climate accord. Photo by Olivier Douliery/Abaca (Sipa via AP Images)

The resignation of the US lead diplomat in China Monday over President Trump’s withdrawal from the Paris climate change accord threw added gas on the political fire Trump’s decision has ignited.

Critics condemned the June 1 announcement as a threat to the planet’s ecology and abandonment by the United States of global leadership in climate change; climate change skeptics shrugged, noting the agreement’s greenhouse gas limits were voluntary on signatories. As for David Rank, US chargé d’affaires in China, he said that having to defend the withdrawal violated what he called his duty as a “parent, patriot, and a Christian.” (His replacement, Ambassador Terry Brandstad, was confirmed in May, but had not yet been posted to Beijing.)

In announcing US withdrawal from the accord signed by 195 nations, Trump cited what he said was the potential loss of almost three million jobs by 2025 from the costs of the accord’s energy restrictions. Even farther out, he said, the job losses and hit to the gross domestic product would burgeon even more. “I was elected to represent the citizens of Pittsburgh, not Paris,” Trump stated during his announcement from the White House Rose Garden.

Who’s right—the president or his critics? And will he pay for abandoning a deal that an overwhelming majority of Americans supported? BU experts on the environment, economy, and politics weigh in.

BU Today: Does the withdrawal from the Paris accords spell the end for mitigating emissions of greenhouse gases?

Anthony Janetos
College of Arts & Sciences professor of earth and environment and director of the Frederick S. Pardee Center for the Study of the Longer-Range Future

I’ve argued that withdrawing from the Paris accords will ultimately damage both the United States and many vulnerable people in the developing world, specifically because it will likely result in less mitigation of greenhouse gas emissions than would otherwise occur, and because the United States is also halting payments to the Green Climate Fund, which is meant to support adaptation projects.

Does this mean that there are now no ways for the United States to reduce its greenhouse gas emissions? On that point, the answer is just as clearly no, although I think it will not happen as fast as if the federal government actually implemented constructive policy. For one thing, the US economy has been slowly decarbonizing over time. Some of this trend is likely due to structural changes in the economy, e.g., some replacement of jobs in the manufacturing sector with various jobs in service and financial sectors. Some of it is the replacement of much of coal-fired electricity generation with natural gas and increased penetration of renewable sources. Some of it is technologically and policy-driven increases in the end-use efficiency of energy. For another, there are strong alliances among some states, and now many cities, to make progress on reducing greenhouse gas emissions. They can’t do everything; there are areas, like fuel efficiency standards for vehicles, where the federal government has a critical role to play. But they can do a lot, with renewable portfolio standards at the state level and city policies at the local level, such as Boston’s commitment to be carbon-neutral by 2050.

There is no good reason to think that such measures are going to be economically harmful on national, regional, or local levels. We sometimes tend to forget that even the existing policy and regulatory environment counts benefits as well as costs, and a clean and healthy environment also has tangible benefits for our health, well-being, and the long-term sustainability of our ecosystems.

Will Trump’s decision help or hurt our diplomatic relations? What should we do going forward to improve relations with other countries and our role in the world?

By deciding to sit out of the Paris climate accord and choosing to ignore possibly the single greatest security threat to our future, President Trump announced to the world that the United States is no longer interested in—and in his view, capable of—being a global leader. This abdication from global leadership is quite easily the greatest foreign policy reversal by any major power since Gorbachev’s decision to dismantle the Soviet Union.

This can be seen as declaring bankruptcy—stepping back from our responsibilities because we are no longer capable of meeting our obligations. In business, this is occasionally acceptable. In Mr. Trump’s own financial affairs, declaring bankruptcy has been a favored strategy. But in international affairs, it is nearly unheard of by a major power.

While the political implications of this decision are catastrophic, the climatic ones are less so.

The president said the Paris accord would cost American jobs, although many corporate leaders supported staying in. Will leaving the accord help or hurt the American economy overall, and in what ways?

Leaving the accord definitely sends troubling signals. US businesses will be unsure what kind of regulatory actions or other kinds of support they’ll get for investments in clean technologies, making such investments riskier. It’s obvious from the initial reactions that the Europeans and the Chinese are eager to step into the gap and push the development of such technologies in their countries. So there’s a definite risk that the next big technological developments will take place in other countries, to the disadvantage of US businesses and workers.

On the other hand, a lot hinges on exactly what “leaving the accord” really means. Certainly, the United States could take steps to encourage investments even if it’s not in the accord. Also, states like California, New York, and Massachusetts, cities like Pittsburgh and Boston, and many private companies are saying they plan to proceed as if there were no changes in the US status in the accords. If they stick to this, the effects of withdrawing could be mainly symbolic.

Polls suggest most Americans support staying with the Paris accord. Politically, why did the president take the less popular route, and will it hurt or help his political capital?

Trump really didn’t have much of a choice. While running for the presidency, he energized his enthusiastic partisan supporters by claiming climate change was nothing but a clever hoax—something the Chinese had cooked up to undermine American economic competitiveness throughout the world. The core Republican base—composed of alt-righters, gun advocates, science deniers, evangelical Christians, and fossil fuel advocates—ate it up. To them climate change and federal regulatory efforts to combat it are taking good jobs away from hardworking people. One needs only to see Trump’s popularity in the heart of coal country—West Virginia—to understand this. Up until this election cycle, it was always taken for granted that West Virginia would go blue in presidential contests. Not this time.

Trump promised to revive a coal industry that has been steadily losing jobs in recent decades. His central argument was that overweening environmental regulations were making it impossible for coal companies to turn a profit. That’s all the economically battered citizens of the Mountaineer State needed to hear. “He is a whacko; he’s never going to stop being a whacko,” one West Virginian told National Public Radio. “But I mean, the things he did say—the good stuff—was good for the coal mining community.” Indeed, Trump won the state handily, with almost 70 percent of the vote. In any sporting contest that’s called a rout. Meanwhile, Democratic presidential rival Hillary Clinton’s honest assessment that these mining jobs weren’t coming back and what was needed was a transition to a clean energy economy fell on deaf ears.

The same could be said of how the Paris Climate Agreement affected Trump’s thinking. If nothing else, the former television reality star knows his audience. Any talk of complying with the treaty and its mandated lowering of national carbon-based emissions (read coal) would be seen as nothing less than a sellout to his supporters. As one West Virginia voter revealed to Rick Hampson of USA Today, “He needs us. He got elected because of us.” And if there is anything Donald Trump appreciates it’s loyalty. Just ask former FBI director James Comey, who apparently failed that critical political test.

I think the key here is that this may be nationally unpopular (like much of Trump’s agenda), but it is popular with a key part of his base. With unprecedentedly abysmal approval ratings, the base is all that is keeping him even close to afloat. If he loses them, he will be in free fall.

The Fallout from Trump’s Paris Accord Withdrawal

The Fallout from Trump’s Paris Accord Withdrawal
9
share this