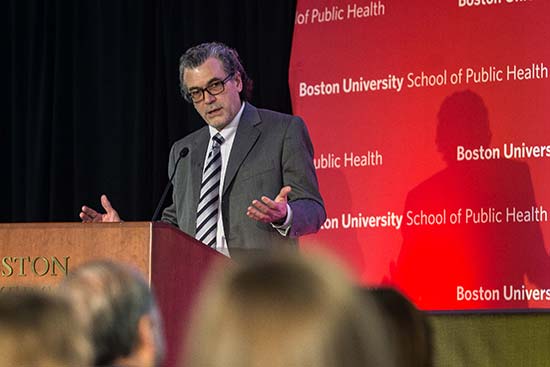 Despite all the inroads made in reducing health inequities over the past three decades, glaring gaps in research and understanding about the ways that interpersonal, structural, and internalized racism affect health outcomes remain.

That was the consensus of more than a dozen experts in health disparities gathered at the School of Public Health on February 1 for a Dean’s Symposium headlined Reducing Health Inequities: Advancing Meaningful Change, cosponsored by the School of Social Work.

While research has moved the needle forward in identifying the underlying biological, social, and economic factors driving health disparities, scientists and public health practitioners are just beginning to grapple with the pathways by which racism and other forms of discrimination result in poorer health outcomes.

“The legacy of inequality in health care is one that we need to own as health care scientists,” said symposium featured speaker Eliseo Perez-Stable, director of the National Institute on Minority Health and Health Disparities at the National Institutes of Health. Particularly pressing, he said, is the need for data that link discrimination and racism to disease outcomes by identifying “biological connections,” such as chronic stress.

“Data is leverage,” he noted, urging more study on “the pathways where you have biological plausibility” to connect racism to physiological measures. Research on brain chemistry is an important and largely uncharted area that may help to explain “a lot of observations we make that we can’t fully explain based on our models.”

A growing body of research has found that variations in race, ethnicity, and socioeconomic status are major contributors to health outcomes ranging from heart attacks to cancer to longevity. Fully understanding the role of race and class in health requires expanding that research into inequities driven by institutional or internalized perceptions of racism—terrain that is more difficult to navigate, Perez-Stable and the other experts said.

Research into inequities requires not only targeting specific at-risk subgroups for interventions, but looking at the larger social forces that create and perpetuate those disparities, said Alfredo Morabia, a professor of epidemiology at Columbia University Mailman School of Public Health and Queens College, City University of New York.

“If you want to improve the condition of people who suffer the most, you have to look across the larger population,” he said, and take into account factors that create “systems of privilege and oppression” at the social level.

Pointing to Trump’s recent executive order restricting immigration and suspending refugee admissions and the admission of anyone from seven Muslim countries, Morabia said inequities must be viewed in an ever-changing historical context. Social forces can create or reinforce inequities, he said.

“All of us here, we are suffocating—of anger, of shame—when we see a powerful government inflict violence on some of the weakest people on Earth,” he said, referring to refugees. “Today, clearly we are in a different historical context…than yesterday.” At its core, the study of health inequities is driven by “a sense of justice,” he said, that extends beyond medical care.

Researcher Darrell Wheeler, University at Albany, SUNY, interim provost and senior vice president for academic affairs, said research into inequities must acknowledge the structural forces behind racism and disparities. “Context matters,” he said. “A discussion of equity has to go back to a discussion of how we got there… The United States has never known a point where equality and equity have been the norm.”

He cited a Centers for Disease Control and Prevention study he led three years ago that found that if current diagnosis rates persist, one in two black gay and bisexual men will be diagnosed with HIV during their lifetimes.

“That should not happen in a society that is equitable,” Wheeler said, adding that the work was the first large-scale study of black men and HIV that was headed by a black researcher. He said the onus is on public health professionals to translate their findings to the public in ways that “stress the value for all.”

Tracy Battaglia, a BU School of Medicine associate professor of medicine and an SPH associate professor of epidemiology, noted that some of the racial disparities in women’s health outcomes, such as breast cancer mortality, are driven by factors beyond the medical system. African American and low-income women are more likely to be diagnosed with cancer at later stages.

“A potential breast cancer diagnosis is not the most pressing issue in their lives,” Battaglia said. “Patients tell us that social issues at home are interfering with their ability to access care.”

Patient navigators, who help people to access health care, are useful, she said, but do not remedy the larger issue of health outcome disparities. For that, the medical system must join forces with community partners who can address the same disparities from different perspectives.

Pediatrician Jay Berry, a Harvard Medical School assistant professor of pediatrics and a Boston Children’s Hospital hospitalist, said some clinicians play a part in enabling inequalities in care for patients with disabilities by choosing not to treat those with severe problems. Encouraging more doctors to take on patients with the most complex needs could go far to reduce inequities, he said.

Many questions remain about the development origins of health disparities, which tend to become pronounced in midlife, Perez-Stable said. The role of adverse childhood events—“the whole issue of stress getting under the skin in kids”—warrants more exploration. He cited a number of factors that have been shown to help mitigate the negative effects of racism, such as supportive parenting, early childhood education, socialization, and patient-centered models of health care.

Sandro Galea, SPH dean and Robert A. Knox Professor, described the symposium, organized by Sara Bachman, an SSW associate professor of social research and an SPH associate professor of health law, policy, and management, as an attempt to better understand the systems of injustice that underlie inequities in health—and to rededicate attention to trying to close the gap between the “health haves and the have nots.”