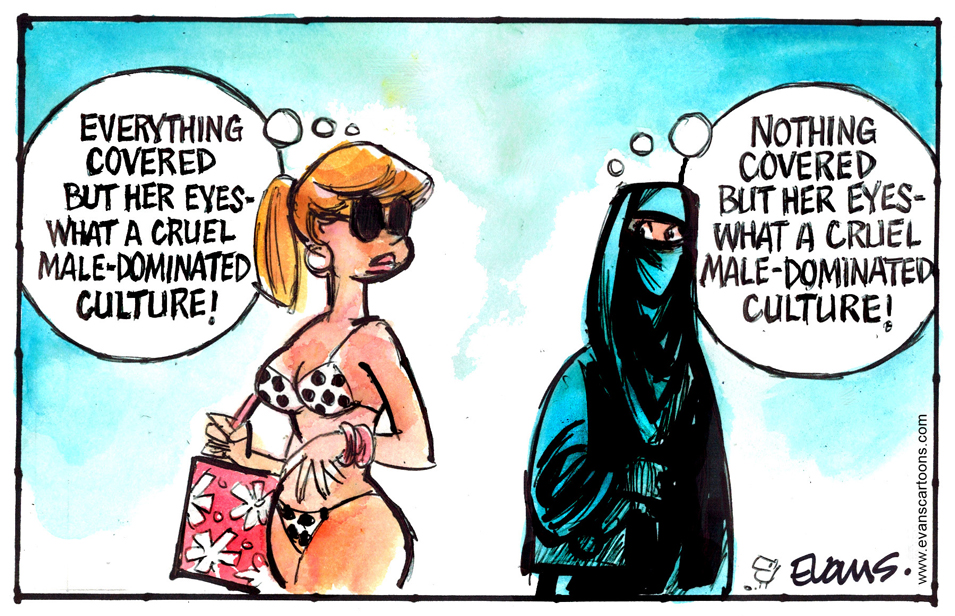 This cartoon, which advertised Diane Balser’s class on sexism, hangs on her wall; it suggests sexism can take many forms.

It’s impossible to ignore the fact that our politics is soaking in sexism, from allegations of harassment and worse by politicians  to males’ dominance in high office.

But at the student body level?

“One time, somebody told me I was too hot to be president,” Kurkul (CGS’16, COM’18) says when the teacher of her Sexism in the 21st Century class invites the class to share personal experiences of misogyny. Another student recalls witnessing a couple arguing outside a restaurant women’s room, which ended when the man shoved the woman inside while barking, “Go change your tampon.”

The teacher, Diane Balser, a College of Arts & Sciences instructor and codirector of undergraduate studies in the Women’s, Gender & Sexuality Studies Program, says that the many women who’ve been assaulted, and the panoply of prominent men accused of committing the assaults, attest to a key theme of the class.

“I don’t think there are bad men,” Balser tells the students. “I don’t think the world is divided into bad men and good men. I think…that all men are susceptible to a male culture” that places them in the role of oppressor. (That’s not to deny that certain acts are so egregious that they must be condemned, she says.)

Amid the dam burst of revelations about prominent sexual predators in the Harvey Weinstein era, and the MeToo backlash against sexual misconduct, Balser’s class has acquired a topical urgency unforeseen at the semester’s start.

Even before charges of piggishness and rape against Hollywood mogul Weinstein broke, Balser says, there was ample evidence that sexism is not a relic of a less enlightened past.

“We just elected a president of the United States who said…essentially, sexual assault was OK—boys will be boys,” she says. (Donald Trump dismissed his recorded boasting of grabbing women as “locker room talk.”)

This century also witnessed movie follow-ups to a popular fin-de-20th-siècle TV show, Sex in the City, whose fans will be distressed to hear Balser call it a sexist example of “the tremendous sexualization of women in the media,” one of the topics covered in class. Others include beauty and body image, reproductive issues and marriage, and counterintuitively, oppression of men (students read Guyland, about suffocating, stereotypical expectations of men, such as never showing feelings).

“What I teach is that there have been ongoing changes for better and for worse” regarding sexism, Balser says. “It’s better that women are more educated than they were before. Marriage laws have changed a lot. Men don’t own women anymore in marriage. It’s against the law to rape your wife. Women are allowed birth control information.”

On the downside, “I would say the sexual violence towards women has grown, and it’s more visible and accepted in a very different way.”

“You have to make a decision,” she says. “Is this human nature or are there other causes? And I would say that institutional, structural damage to human beings also causes emotional damage, and sexism is the result of emotional damage, then, to both men, and in an opposite way, to women. I refuse to think that boy children would automatically want to hurt their sisters.”

Mike Reddy (COM’19), the lone man among the two dozen students in the class, paraphrases Socrates in explaining why he signed up for the course: “I know that I do not know,” he says.

“I have a lot of female friends, and I talk to them about these issues,” he says during a break. “I don’t know much at all about sexism. Or at least I don’t experience it in the same way that a lot of women do. By taking this class, I was primarily trying to get more awareness.”

Balser delivered. What women go through, as revealed in class and in this Era of Weinstein, he says, is shocking.

How Many Profs Does It Take to Teach Trauma?

There are 4 comments on Sexism in the Harvey Weinstein Era

Sexism in the Harvey Weinstein Era
One Class, One Day
4
share this