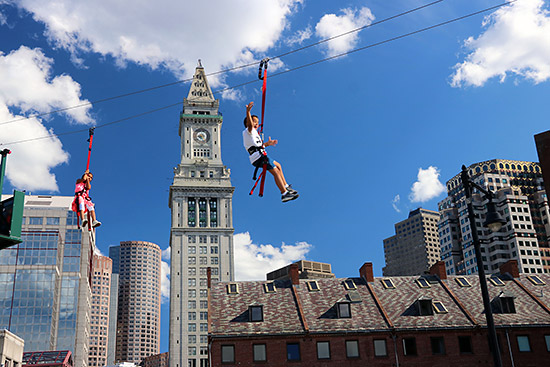 Heads up, thrill seekers—there’s a new way to get your adrenaline pumping, and it’s located right in the heart of downtown Boston.

The Rose Kennedy Greenway, the 1.5-mile public park that extends from Chinatown to the North End, recently added “The Z,” a 220-foot zipline that runs through the park from Clinton Street to its landing area near North Street, across from the Greenway’s North End parks. Visitors get unparalleled views of Boston and the waterfront from atop the 30-foot starting tower before embarking on their ride. Tickets are $8 for one rider, $15 for a pair, and riders must weigh between 45 and 250 pounds and be at least 40 inches tall.

“The Z” is one of a number of offerings that have turned the Greenway into a summer destination for residents and tourists alike. Also new to the park is Trillium Garden, Boston’s first fully open-air beer garden. Featuring brews from Trillium Brewing Company and wine from Westport Rivers Winery, the garden is open from 4 p.m. to 10 p.m. Wednesday through Friday, and 11 a.m. to 10 p.m. on weekends.

While the Trillium Garden caters to adults, children will want to visit the Greenway Carousel in the Tiffany & Co. Foundation Grove. Featuring animals native to Boston (including a lobster, cod, fox, squirrel, grasshopper, whale, and harbor seal), the carousel has proven to be one of the Greenway’s most popular draws, and was designed to be accessible to individuals with physical, cognitive, and sensory disabilities.

The Greenway also offers seven fountains (the Rings Fountain located in the Wharf District parks is the most popular, offering jets of water, perfect for cooling off on a hot summer day) as well as extensive gardens. Other features include the historic Chinatown Gate located in the Greenway’s Chinatown Park.

During summer months, the park also hosts free weekly concerts and film screenings, and a range of free fitness and dance classes that include everything from pilates to bootcamp, yoga to tango. There’s even a farmers market each Tuesday and Thursday.

With so much to do at the Greenway, you’re likely to work up an appetite. Happily, food trucks are on hand daily, offering visitors a number of dining options.

For those in need of a little help planning their visit, the Greenway offers an interactive map showing where to find all of the park’s features.

Summertime Fun at the Rose Kennedy Greenway
0
share this