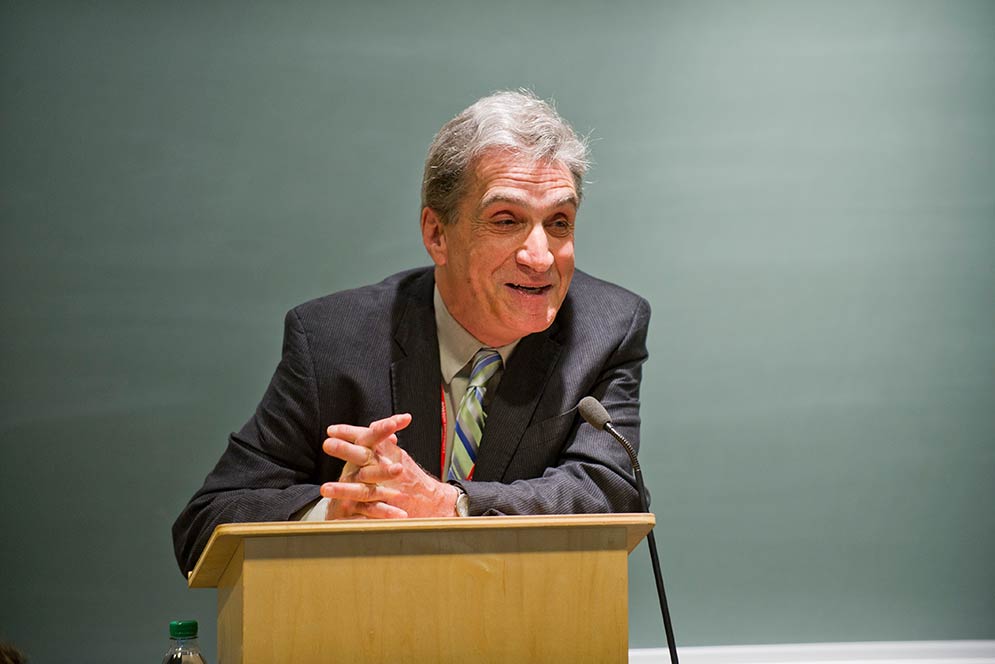 Over the course of a career that has spanned more than five decades, poet Robert Pinsky has amassed numerous literary awards, including the Lenore Marshall Poetry Prize, the William Carlos Williams Award from the Poetry Society of America, the PEN/Voelcker Award, and the Theodore Roethke Memorial Poetry Prize. He is a three-time poet laureate of the United States, a College of Arts & Sciences professor of English, and a William Fairfield Warren Distinguished Professor, and he is an elected member of the American Academy of Arts and Sciences and the American Academy of Arts and Letters.

Tomorrow, Pinsky may add yet another honor to that list. His ninth collection of poetry, At the Foundling Hospital: Poems (Farrar Straus Giroux, 2016), has been nominated for a National Book Critics Circle (NBCC) award for poetry, one of the nation’s most respected literary prizes. Comprising nearly 1,000 book reviewers and editors, the NBCC bestows prizes each year in six categories: fiction, nonfiction, autobiography, biography, criticism, and poetry. Among past winners are Toni Morrison, Dave Eggers, and Taylor Branch.

The 30 poems collected in At the Foundling Hospital: Poems explore identity and the things that make each person unique. There is a largely elegiac tone to the poems, and several deal squarely with grief and loss. Reviewing the book for the Washington Post, Elizabeth Lund writes that the collection “demonstrates a tremendous range of thought and the ability to weave together complex ideas into resonant poems.” Craig Morgan Teicher writes in a Los Angeles Times review that the poems “are methodical, carefully built, heady, perhaps sometimes off-putting, gently sarcastic, and very good.”

One of the nation’s most visible poets (he once appeared in an episode of The Simpsons, has been a guest on Stephen Colbert’s late-night television show, and is the former poetry editor of Slate), Pinsky is also a noted translator, and the author of seven works of nonfiction. BU Today spoke with him recently about At the Foundling Hospital: Poems, literary awards, and his concerns about the future of public education given the current political climate.

BU Today: This is your ninth book of poems. How do you go about deciding what to include in any given collection?

Pinsky: The two criteria, in order, are sound and truth. The poem must sound good, and it must use any grace it may attain in the service of truth. The area of truth for this book is culture, good and bad.

What inspires you as a poet?

William Butler Yeats said, “I get a tune in my head.” The melodies of sentences, the harmonies and discords of vowels and consonants, it’s like noodling at a piano or squishing clay. The hope is that the intuitive playing with the material will psychoanalyze me, bring out some truth that was not entirely conscious.

Several poems—“Grief” and “In the Coma” for example—focus on personal loss and the inevitability of death. Have these subjects lately taken on more importance for you?

As you get older, you get closer to your death. And more friends die. The book is dedicated in part to dear friends who died in 2015, novelist and critic Alan Cheuse and poet and translator C. K. Williams. When Alan was in a coma, people sang and told jokes and read to him: culture calling, through us, to him, hoping he was a foundling we could reinitiate. Though it did not happen that way. Alan died.

What was your reaction when you learned that At the Foundling Hospital had been nominated for the 2016 National Book Critics Circle Award for poetry?

I try to be grateful for awards, prizes, titles, and I try not to overestimate them.

Why was it important to you to be one of several writers participating in the PEN America Writers Resist literary protest defending free expression just before President Trump’s inauguration?

PEN/Writers Resist commissioned an inaugural poem for that occasion: I wrote “Exile and Lightning,” which is posted on CNN Opinion. It’s the first poem I’ve published with the editorial note, “The opinions expressed are his.”

The menace and falsehood of the disastrous present administration have been widely noted.

There are fears that the new administration may cut funding for the arts and the humanities. How concerned are you?

While I am concerned, I know that the arts have done quite well without official funding. The threats to public education, including arts education, are terribly menacing, in a fundamental way. For me, that is a more serious, immediate menace that we must resist. Public education is essential to American democracy and culture.

Given the current political climate, do you worry about the future of poetry in America?

No. As Czeslaw Milosz says in his poem “Incantation,” the enemies of poetry and “philo-sophia” (science) “have delivered themselves to destruction.”

Poetry is fundamental, basic, inherent in the human animal. It is like food. And the history of art, like the history of food, may be full of horror and injustice. But the thing itself persists, by its nature.

The winners of this year’s National Book Critics Circle Awards will be announced tomorrow, Thursday, March 16, at a ceremony at the New School in New York City at 6:30 p.m. Robert Pinsky will read from At the Foundling Hospital: Poems tonight, Wednesday, March 15, at the National Book Critics Circle Award Finalists’ Reading at the New School, 66 West 12th St., at 6:30 p.m.