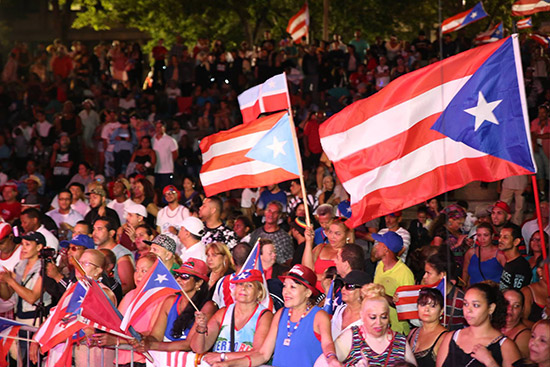 This weekend marks the return of the annual Puerto Rican Festival of Massachusetts, which this year observes its 50th anniversary. What began as a one-day event that attracted an initial crowd of 2,500 back in 1967 has turned into a three-day celebration of the island’s food, music, and arts that draws crowds numbering more than 150,000. Today, it is the largest Hispanic festival in New England.

While the focus is primarily on Puerto Rican culture and heritage, the goal of the event is to unite all Hispanic people around the festival’s goals of promoting cultural awareness, fostering community activism, and encouraging educational programs. The weekend includes performances by local and international musicians, kiosks selling Puerto Rican food and local arts and crafts, and a host of family-friendly carnival rides and activities, topped off by a parade down Boylston Street on Sunday.

The festival, taking place at City Hall Plaza, kicks off tonight at 5 p.m. with an evening of music by artists from all over New England performing in both Spanish and English, as well as an appearance by the dance team INTHEMAK’N, and ends at 11 p.m. The fun continues on Saturday with musical performances throughout the day. Among the artists scheduled to appear are Nino Segarra, Kayvan Vega, and Pedro Valentin. Kids activities, courtesy of Zoo New England, take place from noon to 3 p.m.

The highlight of the festival is the grand parade, which begins at noon on Sunday, rain or shine, starting at the Hynes Convention Center. It will include twirlers, bands, floats, and more, and is expected to draw about 30,000 onlookers as it proceeds down Boylston and Tremont Streets before concluding at City Hall Plaza. Following the parade, the party continues on the plaza with performances by Tony Vega, Edgar Joel, and Bomba de Aqui.

This year’s festival will also include a Latino Health Fair, taking place on Saturday at City Hall Plaza from 1 p.m. to 5 p.m. Visitors will be able to take part in health screenings, obtain information, and speak with health care professionals from a number of local organizations. More information about that can be found here.