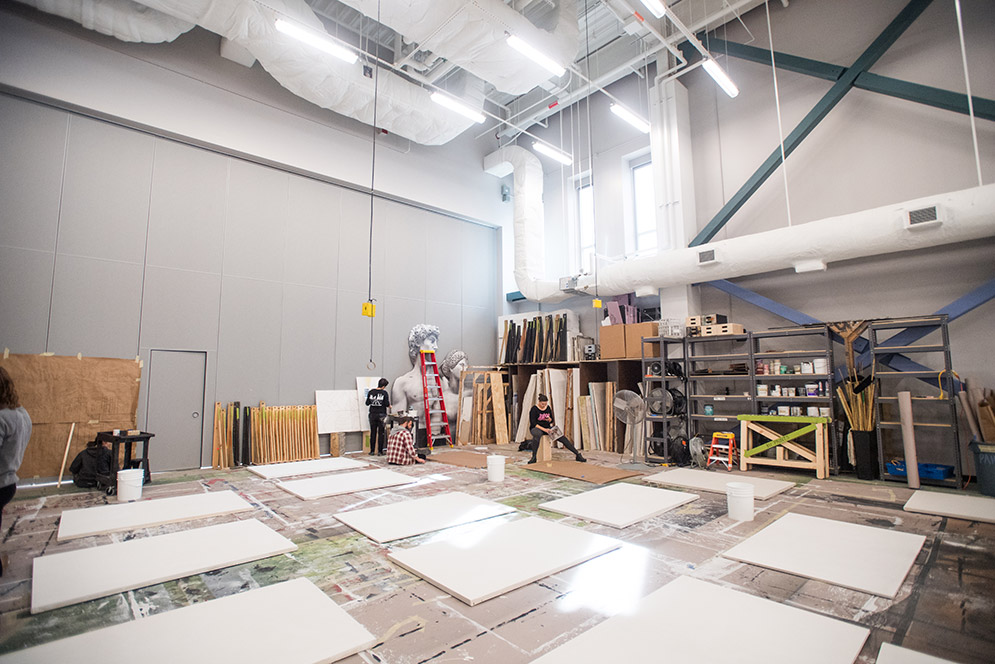 For years, BU theater design and production students and faculty made do with facilities at the BU Theatre, where they shared studios with the Huntington Theatre Company’s professional artists. The College of Fine Arts School of Theatre students were easy to spot on the BU Shuttle, hauling their painting tools and oversized portfolios for the two-and-a-half-mile ride to and from the Charles River Campus.

Those days ended at the start of fall semester, with the opening of the new state-of-the-art Boston University Production Center, just across Comm Ave from CFA. The center stands alongside the Joan and Edgar Booth Theatre, whose doors will open in time for the spring semester.

The 75,000-square-foot theater complex, designed by Elkus Manfredi Architects, comprises the 250-seat theater, production and costume shops, design labs, classrooms, faculty offices, and a landscaped plaza. The project was funded in part by the University’s 2016 sale of the BU Theatre, the longtime home of the Huntington Theatre Company.

“In the new building, you have pride of place. Students feel a sense that this place ennobles their work,” says Jim Petosa, director of the School of Theatre, a member of the faculty team that collaborated with the architects on the design. Previously, design and production students didn’t see much of their performance classmates, who work out of the CFA building. Now, Petosa says, “the proximity that they have to each other is stimulating collaborative energies. That’s a direct result of the new building.”

While the outside of the complex and the interior of the theater are still very much construction zones, the Production Center’s scenery, prop, and costume shops are brimming with activity. Students in Diane Fargo’s scenic painting class are working with large canvases in sun-drenched studios, designing a 25-by-50 foot ground cloth that will be a backdrop in an upcoming production. If they choose, they can raise the backdrop in the shop to see it as it would appear on a stage.

“Not having to share the space is huge for us,” says Fargo, a CFA senior lecturer in scenic design. “Students get so much more out of the experience because they can spend the time and spread out as opposed to constantly moving around. They are going to walk out of here with serious experience.”

Facility production manager Johnny Kontogiannis (CFA’02) says the faculty team began thinking about the building process the same way an artist approaches a blank canvas. “We asked, ‘What makes a fully comprehensive production facility?’” he says. “We collaborated to develop a space that was useful and reflected on some of the problems we had in the old building.” For instance, lighting and sound designers had previously worked in separate rooms, but collaboration is now possible with the new sound and light lab, which Petosa describes as a place where theater-makers can create conditions to test the interaction of lighting and sound before bringing them to the stage.

Architect Ross Cameron, an Elkus Manfredi senior associate, says it’s unusual to have such a large scene shop in an urban area like Boston. “In the scene shop, we very purposely included windows and openings in a building typology that is usually just a big metal box,” says Cameron. “If someone’s walking down Dummer Street, they can look in and watch someone painting a scene. None of the building design was whimsical. It’s all driven by giving CFA maximum flexibility in the space.” For instance, a partition wall divides the large room so multiple groups can use it, but it can be pulled back.

He compares the production wing’s layout to a “theatrical assembly line.” First up is the loading dock, where raw materials are brought in. Next comes the fixed tool area, where materials are cut and shaped before the assembled pieces are brought to the paint shop. Sets and backdrops can either take a left into the Joan and Edgar Booth Theatre or be loaded back onto the truck to head to another facility.

“The only limitation is that pieces have to be able to fit in a truck,” says Walt Meissner (CFA’81), BU associate vice president for operations, who is overseeing the project for the University. “So the truck is what’s limiting the size, not the building.”

Faculty team members say they are particularly indebted to Steven Friedlander (CFA’80), president of performing arts planning and design firm Auerbach Pollock Friedlander, who has been the project’s official theater consultant. “His guidance and knowledge helped provide clear communication and a professional knowledge that bridged our faculty teaching-artists and the architecture team,” Petosa says. “Together, they created a state-of-the-art facility that is flexible and flawlessly designed for maximum use and efficiency and offers our students an exemplary place to work and learn.”

Jon Savage, a CFA assistant professor of scene design and head of undergraduate design and production, says everyone is pleased that the University invested in such a facility. “We’re really grateful for the University’s recognition of, and contribution towards, the needs of these students,” he says. “We feel it is a continued investment in us.”

New Theatre Production Center Is Up and Running

New Theatre Production Center Is Up and Running
1
share this