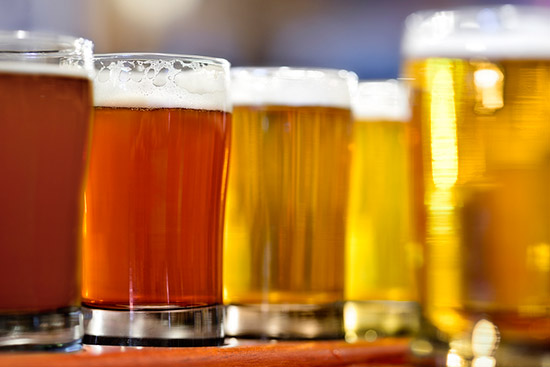 Summer, in the words of that great philosopher Nat King Cole, is “those days of soda and pretzels and beer.” Sandy Block knows a lot about that last option. A Metropolitan College gastronomy lecturer and vice president of beverage at Boston-based Legal Sea Foods, Block has taught the Foundation of Beer and Spirits class since 2012. He knows people’s palates are different, and so his following list of the top five New England brews is more about style than quality, he says. He personally prefers malty and rich beers—though in summer he does gravitate to crisper-tasting beverages. “I don’t like waiting on line with an empty growler,” he says, “so I’ve never actually tried some of the cult local brews that are released in miniscule qualities.”

1. Samuel Adams Boston Lager (Boston, Mass.) “The granddaddy of craft, it’s one of those beautifully balanced beers that tastes so consistently good we tend to forget it in the rush to experience the latest and greatest new flavor every week. I’m a big fan of the more understated central European noble hops that they use, and there’s a grainy, caramel note that harmonizes nicely with the delicate spice. Reliable doesn’t do it justice, but it is.”

2. Allagash White (Portland, Me.) “What I love so much about this Belgian-style witbier is its creamy frothy texture (imparted by the high percentage of unmalted wheat in the mash bill) and subtle lemon and coriander notes. It’s got a savory undertone of tartness that screams summertime and makes it a great foil for fish or seafood.”

3. Notch Session Pils (Salem, Mass.) “For pure refreshment value during the dog days, you’d be hard-pressed to do better than this light, fresh, crisp pilsner-style lager. It has good, pronounced bitter notes and strong carbonation, which combine to refresh your palate. Chill this down and have two; its low alcohol content (4 percent) makes it a fine choice to serve at a party.”

5. Berkshire Brewing Coffeehouse Porter (South Deerfield, Mass.) “This ale is rich and intense, with organic coffee added to the recipe. Its flavors impart a little bit more of a bitter kick to the slightly sweet maltiness. Medium-to-full-bodied, it’s great at the end of a meal with some dark, bittersweet chocolate. But then again, what isn’t?”