The moment you’ve all been waiting for: the unveiling of the 2017 batch of ugly holiday sweaters (and the folks who admit to owning them) adorning those students, faculty, and staff brave enough to enter our second annual Ugly Holiday Sweater Contest. This year’s go-round drew more than two dozen contestants, and we’re happy to say they did not disappoint. Some came in homemade sweaters, others in store-bought. As you’d expect, there were a lot of appliqués and garlands in evidence. Ditto for snowflakes, menorahs, snowmen, candy canes, and ornaments. Some sweaters paid tribute to Hollywood holiday movies. And in a fitting nod to BU’s mascot, Boston terriers figured prominently. Rhett will be so pleased.

Take a look. These photos will bring a smile to your face. And be sure to check back here at 2 pm when we’ll announce the three ugliest sweater prizewinners. Our thanks to all participants and to photographers Cydney Scott and Jackie Ricciardi, who worked hard to pull it off. 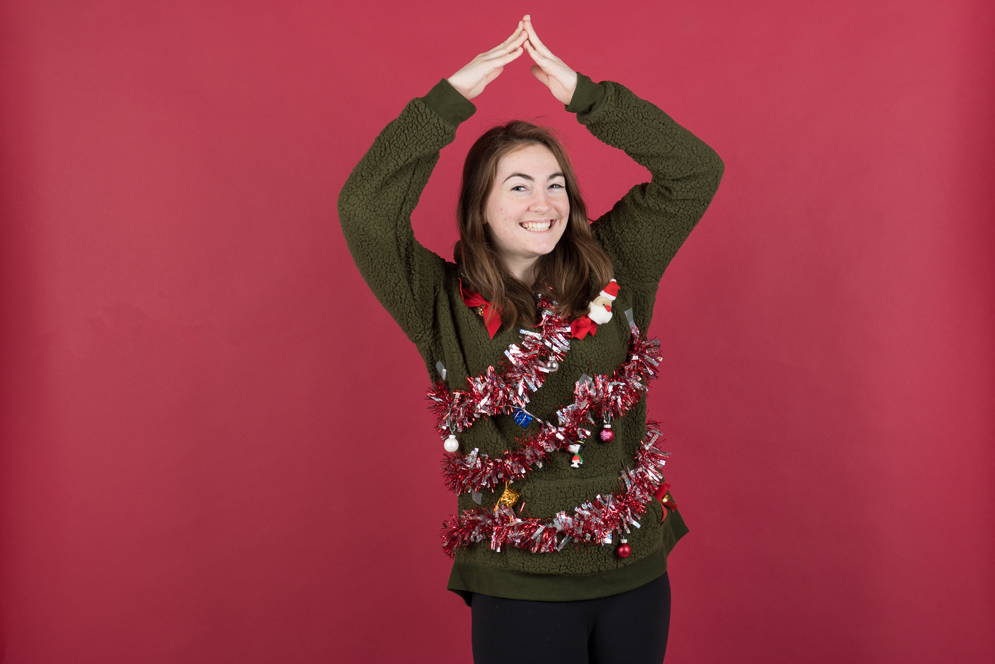 Sophie Phillips (CAS’21) bought this fluffy green sweater at Walmart for $10 on Black Friday. Later she decided to turn it into an ugly Christmas tree sweater, adding tinsel, ornaments, and bows from the Dollar Store. “I made the majority of this sweater while procrastinating studying for my physics final and I’m pretty proud of the ugliness of the final result.” Photo by Cydney Scott 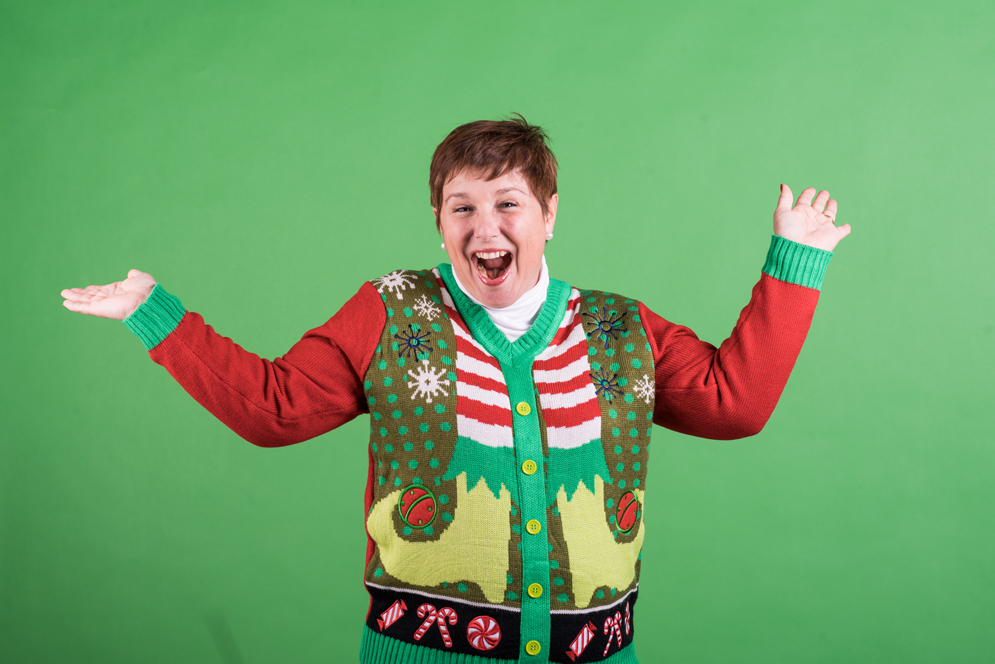 Paula Maxwell, assistant to the School of Hospitality Administration dean, bought her sweater earlier this week at the Big Y so she could enter the BU Today contest. “It’s a fake cardigan,” Maxwell says. Photo by Jackie Ricciardi 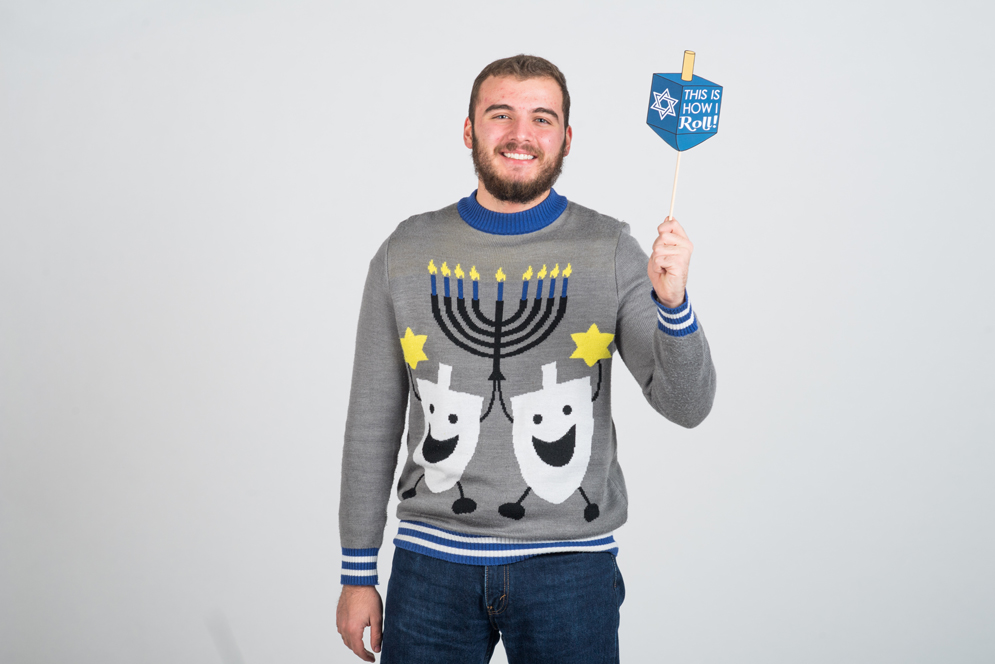 Connor Dedrick (Questrom’21) bought his Hanukkah sweater at Tipsy Elves, a website specializing in ugly holiday sweaters. He says everyone seems to have an ugly Christmas sweater, and he wanted an ugly Hanukkah sweater so he could join in the fun. Photo by Jackie Ricciardi 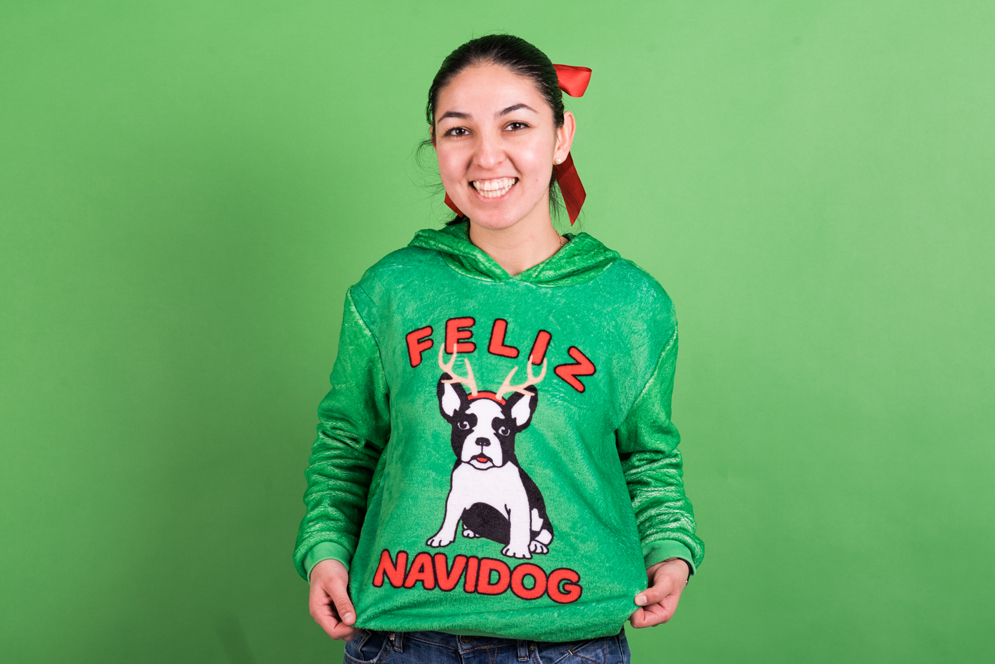 Alejandra Flores (ENG’18) paid $10 for this sweater at Marshall’s. She says the Boston terrier reminds her of her own dog. Photo by Jackie Ricciardi 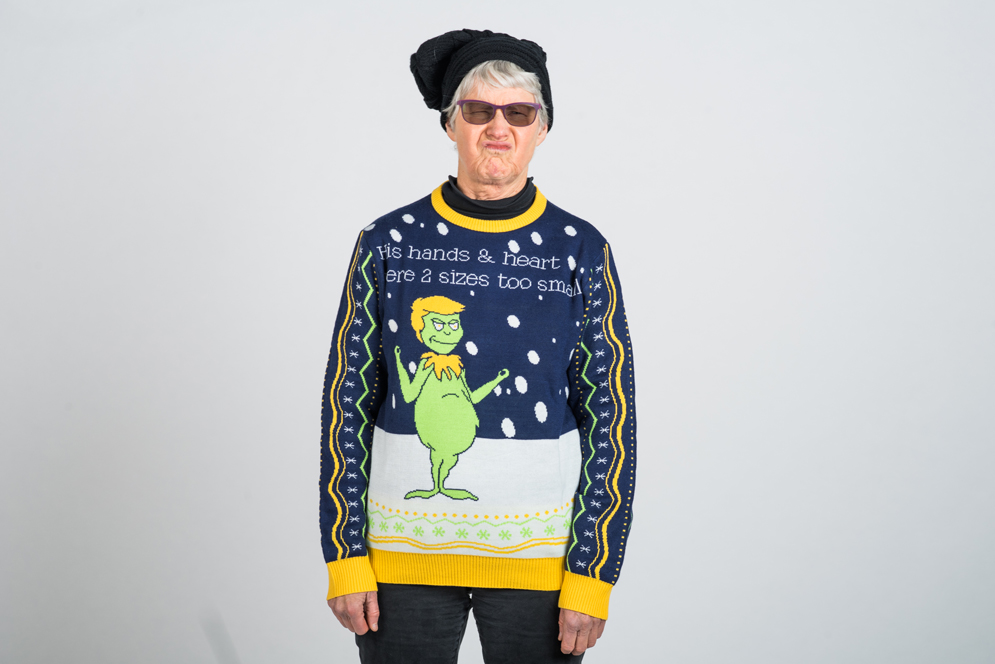 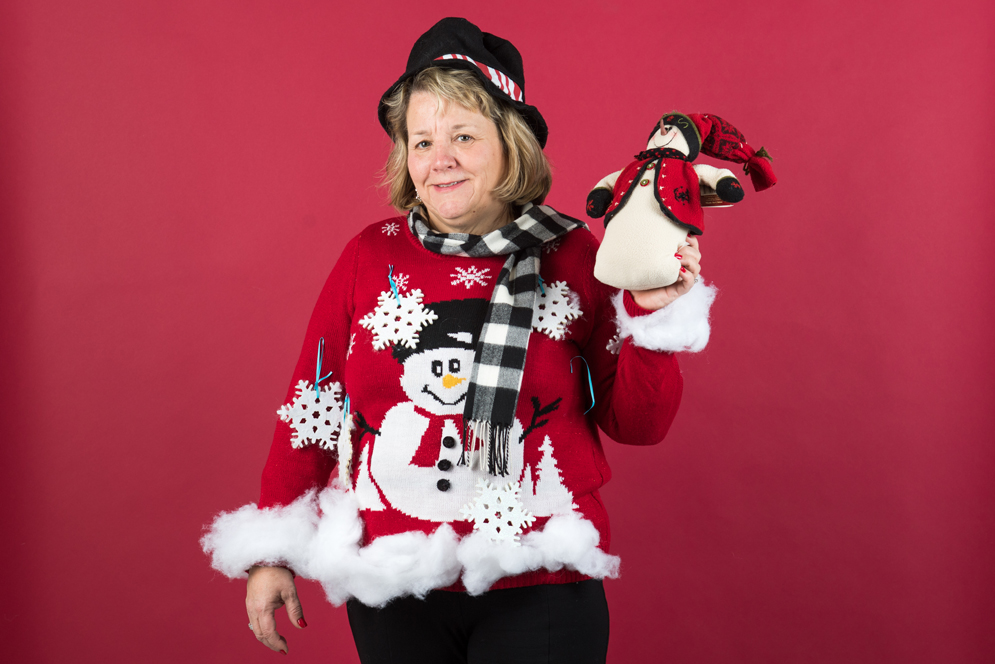 Karen Healy, a College of General Studies administrative assistant, says her sweater is “inspired by my obsession with snowmen. Over the years, I’ve collected hundreds of snowmen. This particular sweater was originally purchased at Walmart several years ago and I embellished it for this occasion.” Photo by Cydney Scott 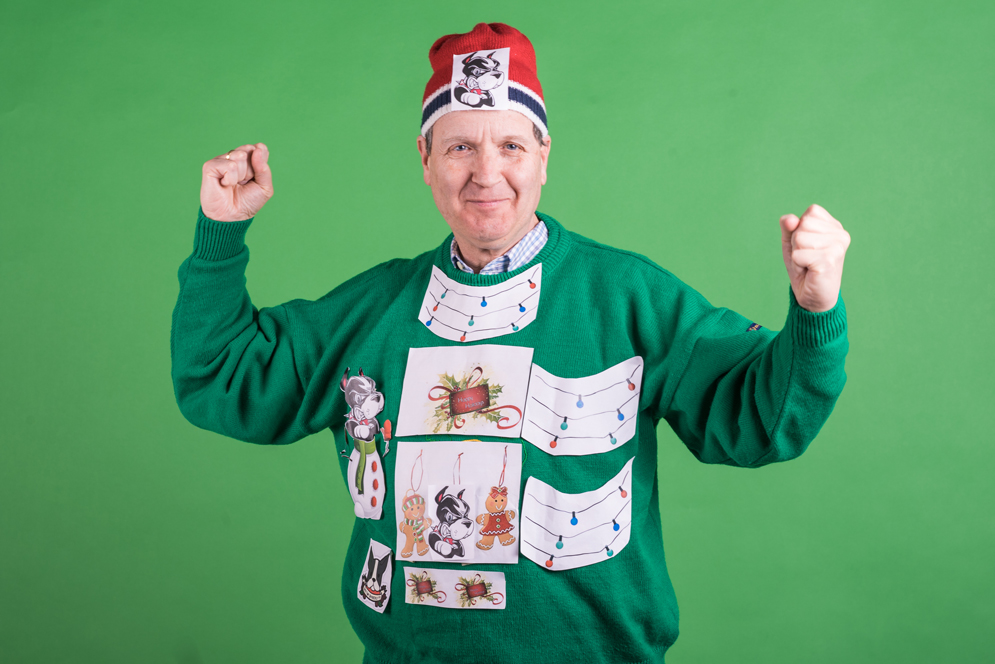 Peter Szende, SHA associate dean of academic affairs, decorated this sweater himself. Everything he affixed to it was free. Photo by Jackie Ricciardi 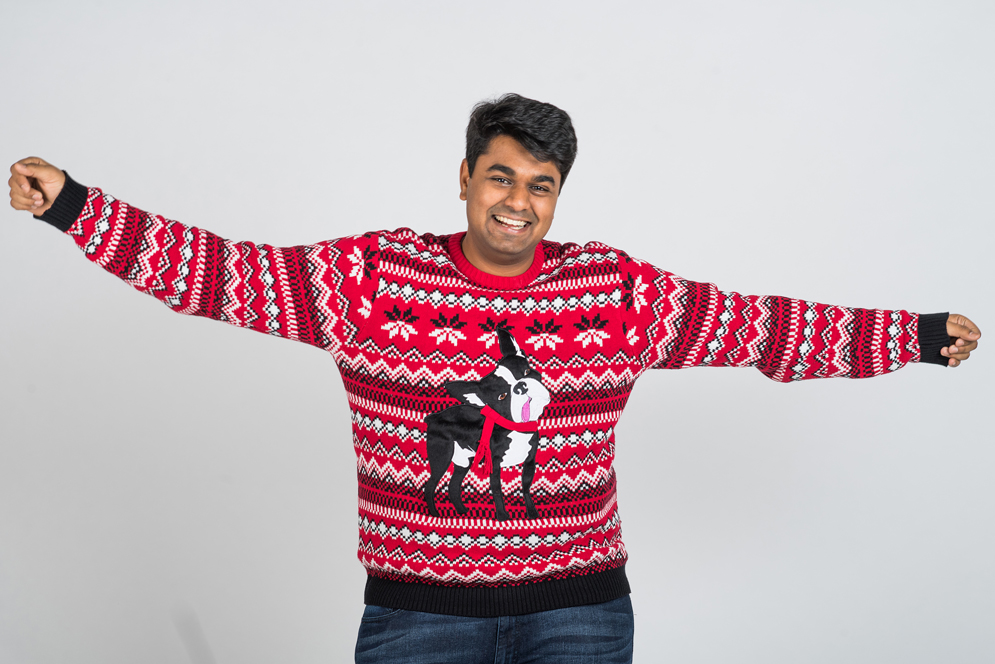 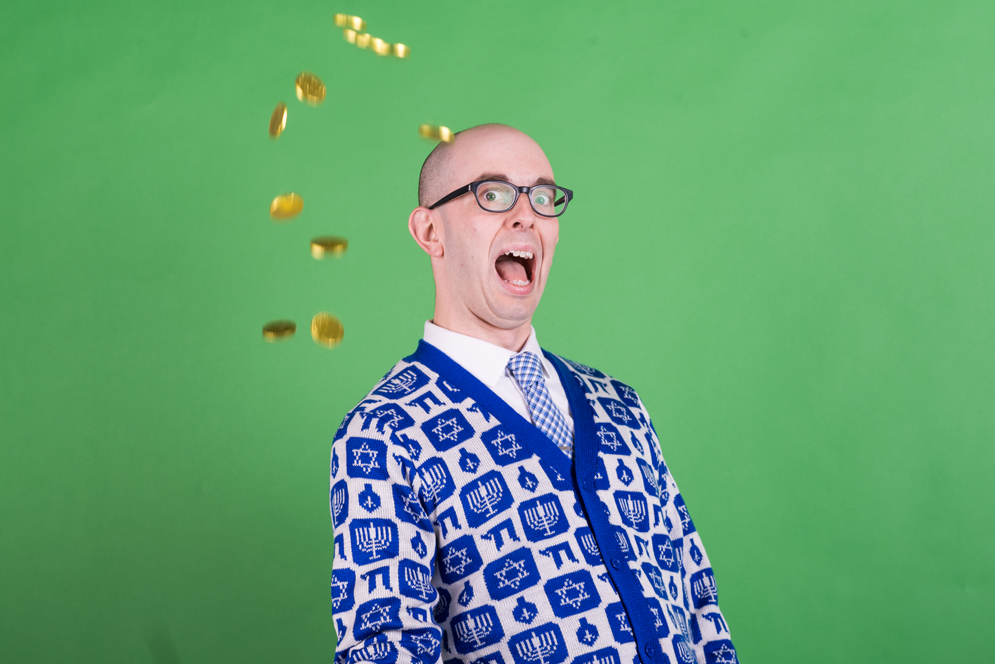 Micah Sieber, SHA director of graduate affairs, was searching for the perfect Hanukkah sweater and found it on Amazon. He admits that he spent much more than he should have. (It isn’t raining rain you know, it’s raining chocolate gelt…) Photo by Jackie Ricciardi 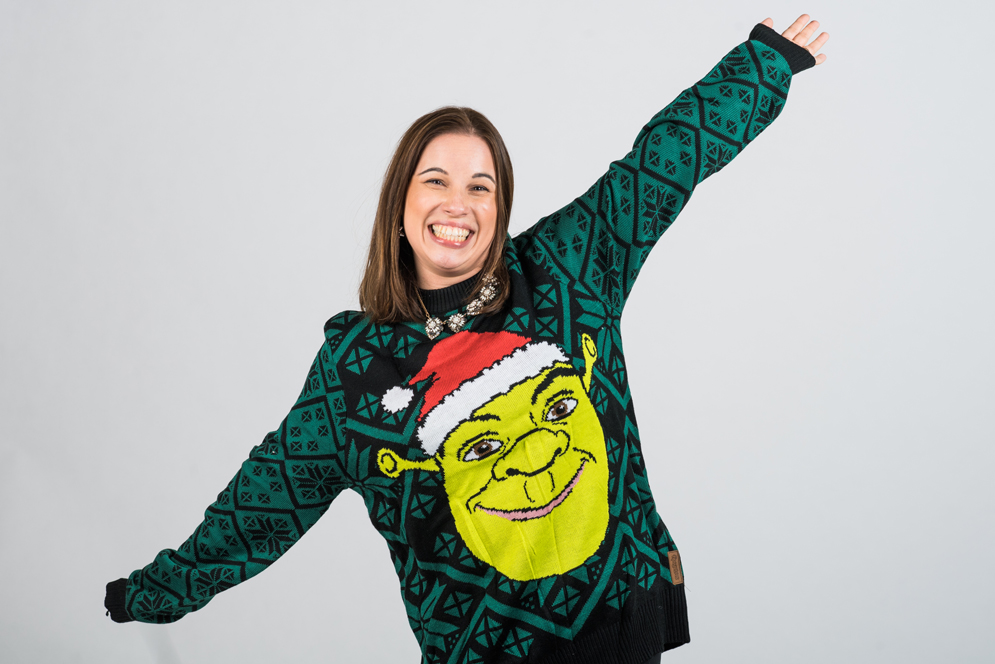 Kat Cornetta, assistant to the dean of students, made a pact with her student employee Laura LaBrecque (CAS’18): both would enter the contest. They bought sweaters inspired by the movie Shrek on the Tipsy Elves website. “It’s an homage to my dad’s favorite comedian, Shrek star Mike Myers,” Cornetta says. Photo by Jackie Ricciardi 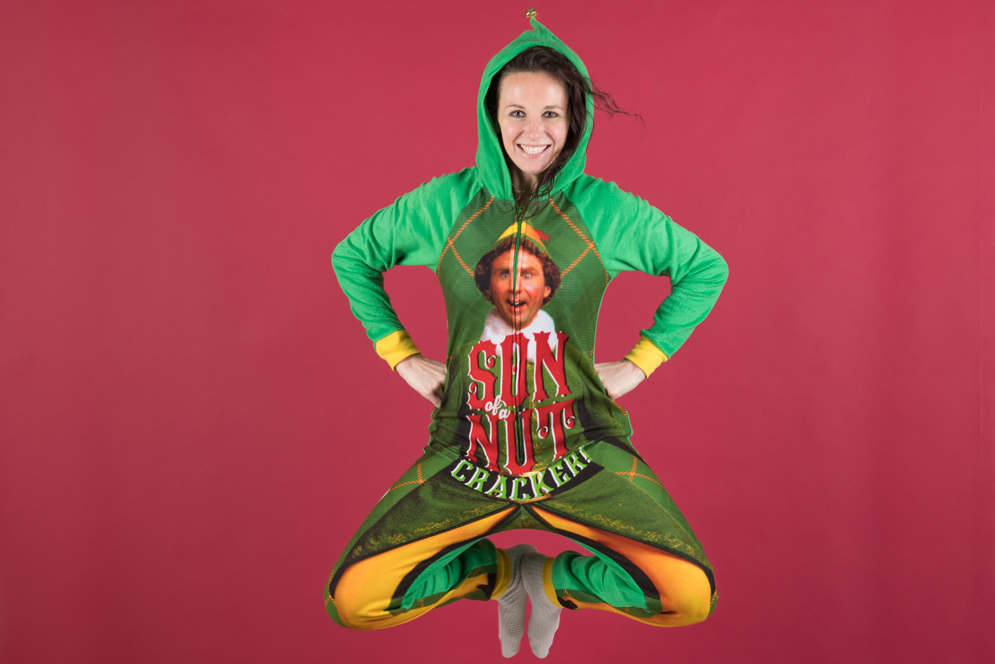 Annie Imperato, Metropolitan College enrollment advisor, says her husband came home one day with an abominable snowman onesie from Walmart. “I loved it and wanted a matching one.” When she went there and saw this one channeling the holiday classic Elf, she had to have it, “Elf being one of my favorite movies and Will Ferrell being one of my favorite actors.” Photo by Cydney Scott 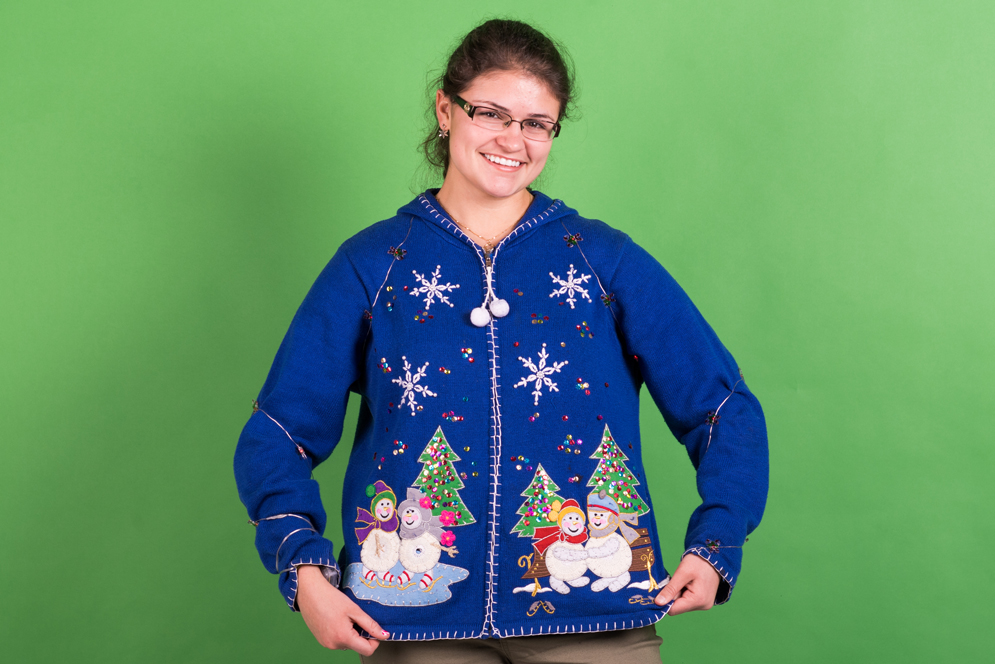 Katarina Gullotta (ENG’18) didn’t have to spend a penny on her holiday sweater. It was handmade by her great-aunt. Photo by Jackie Ricciardi 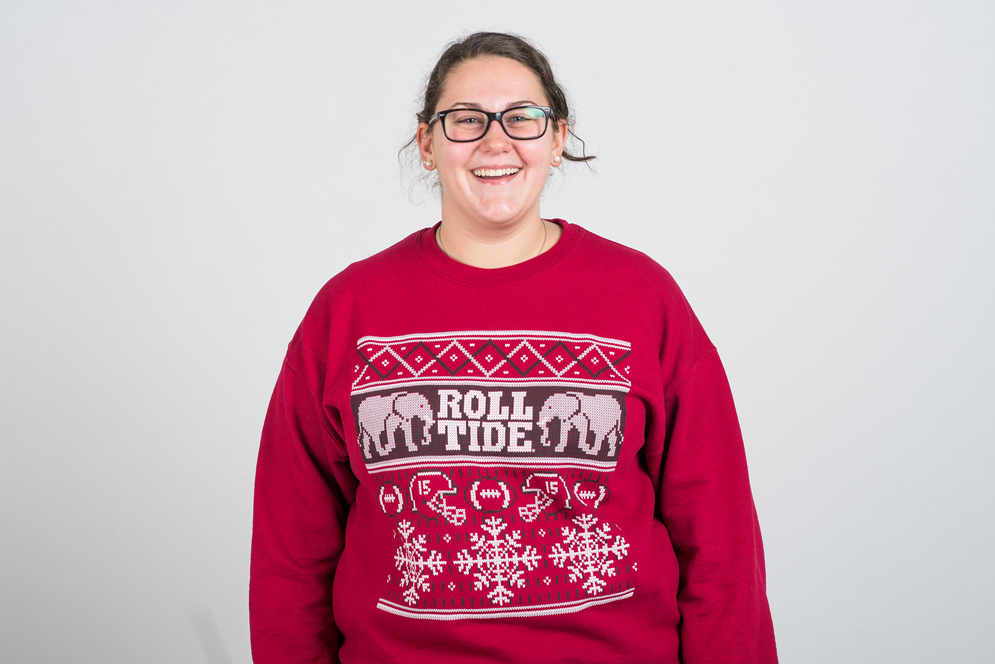 Joanna Urli (MED’19), a SARP graduate assistant, spent $25 for this holiday sweater to support her undergraduate alma mater, the University of Alabama. Photo by Jackie Ricciardi 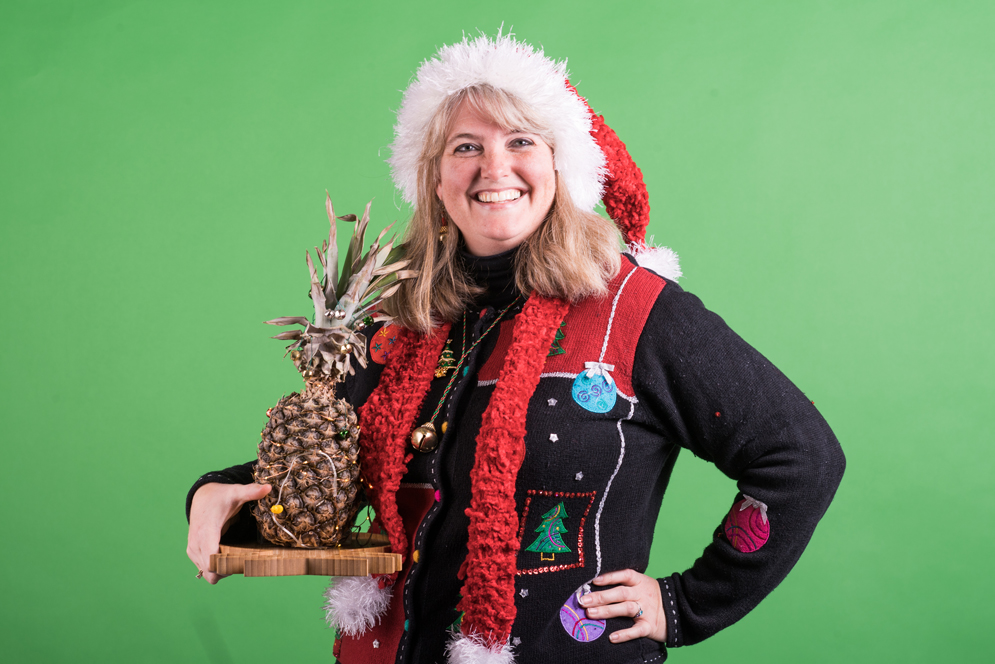 Suzanne Markham-Bagnera, an SHA clinical assistant professor, bought her sweater in 1995 for $20. Back then, she says, sweaters like this were popular, not considered ugly. The pineapple, a symbol of hospitality, is a nod to SHA. Photo by Jackie Ricciardi 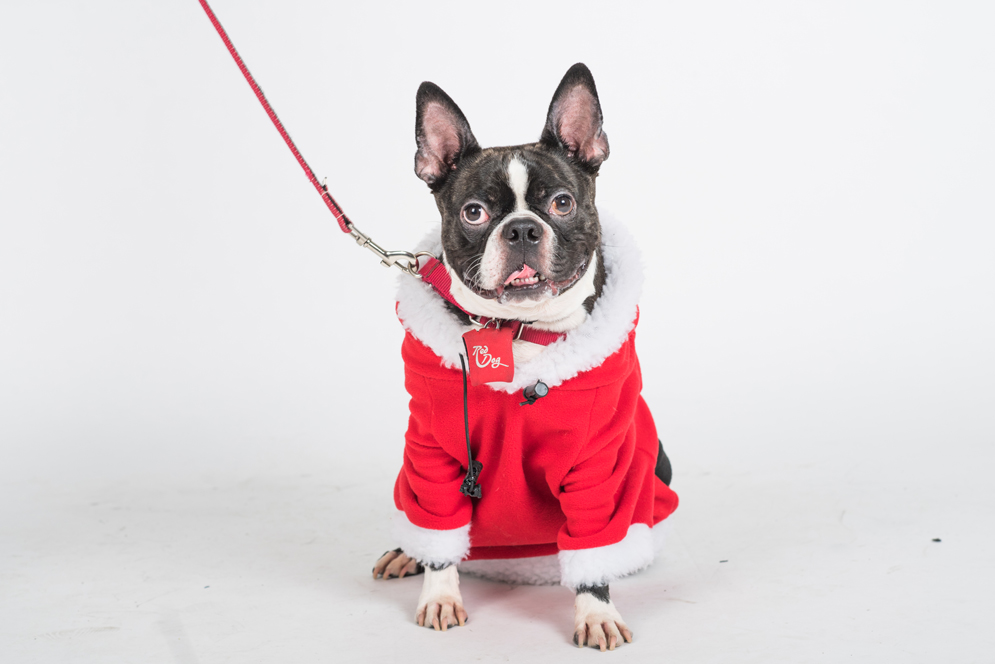 Three year-old Boston terrier Auggie works as a therapy dog at SARP. He asked to enter our ugly sweater contest to mark his first year as a BU employee. Photo by Jackie Ricciardi 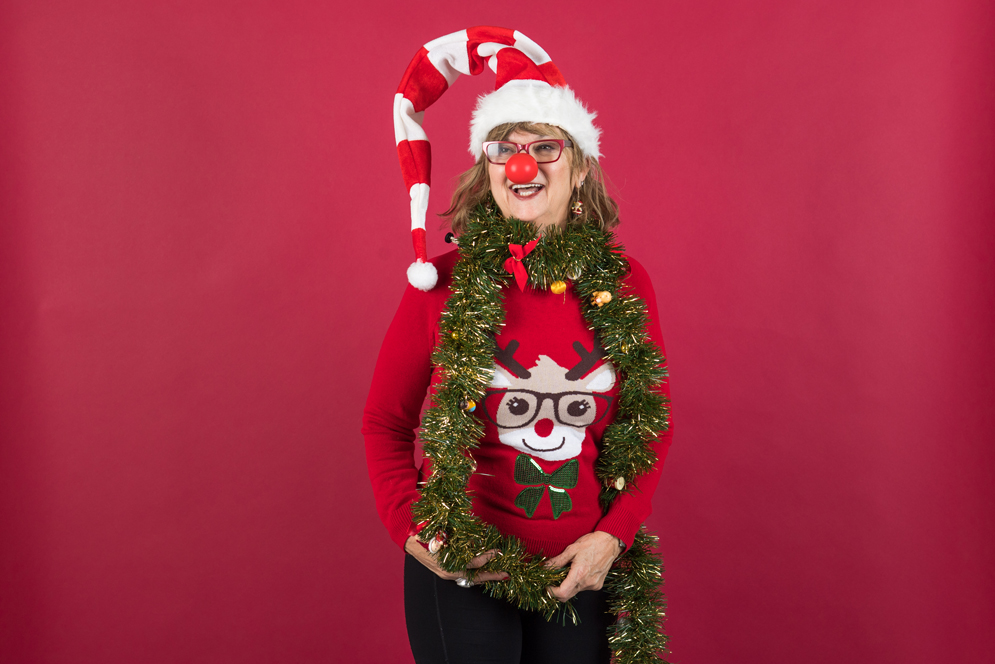 Barbara Storella, a CGS administrative assistant, bought this sweater years ago at Goodwill to have something festive for the holidays. She’s made it more festive by adding a garland—and a nose Rudolph would be proud of. Photo by Cydney Scott 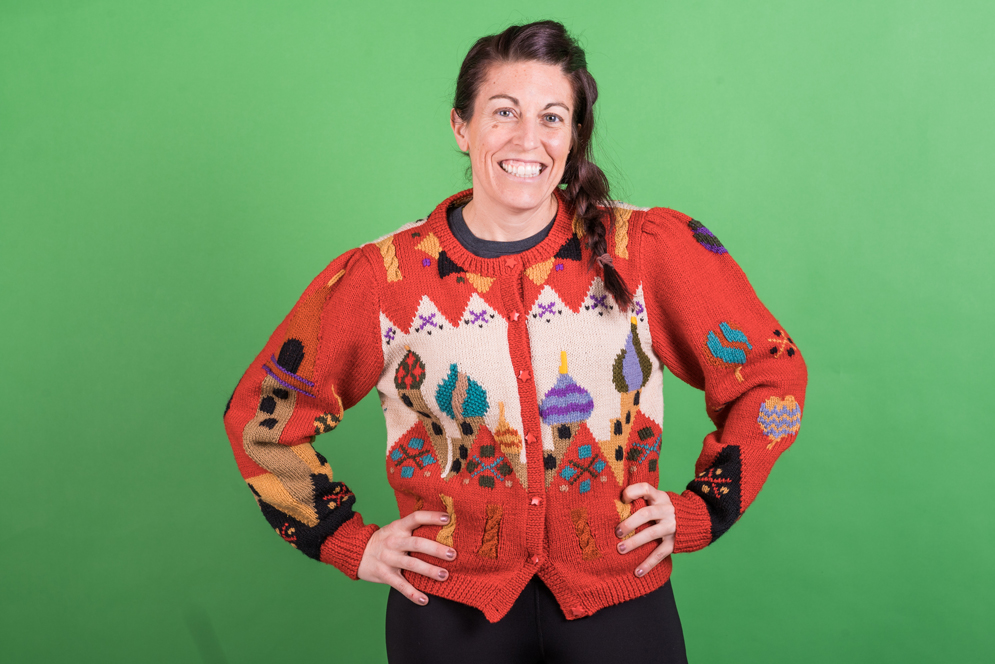 Katherine Durant, FitRec assistant director of programs, thought her sweater was pricey at $15, but after all, it was hand-knit in Uruguay. Photo by Jackie Ricciardi 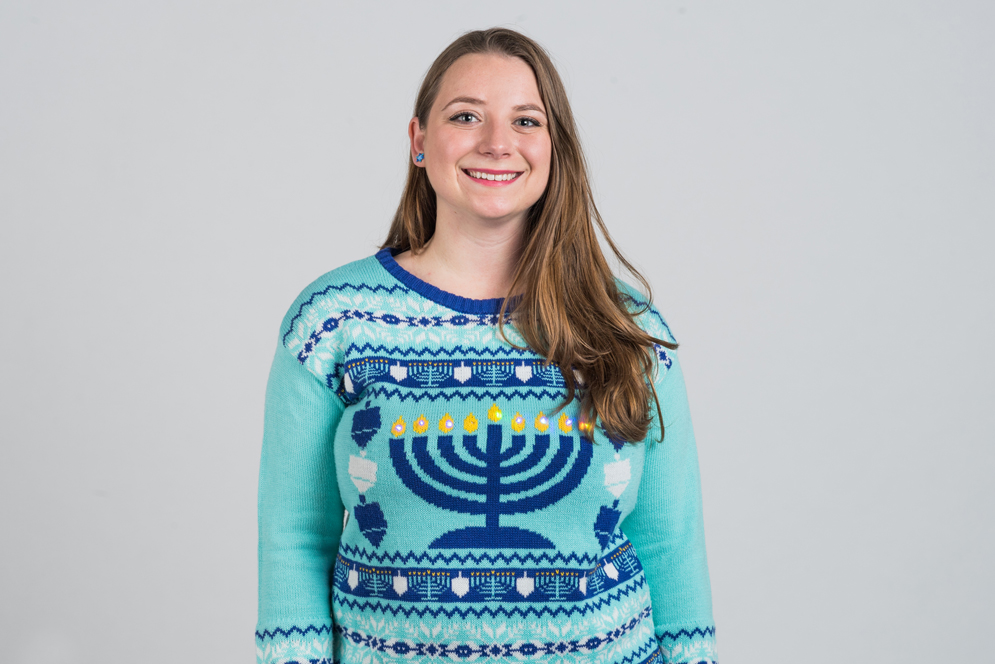 Morgan Weiss (CAS’18) first saw this Hanukkah sweater last year and really wanted it. When she spotted it again this year at Target for $30, she immediately snapped it up. Photo by Jackie Ricciardi 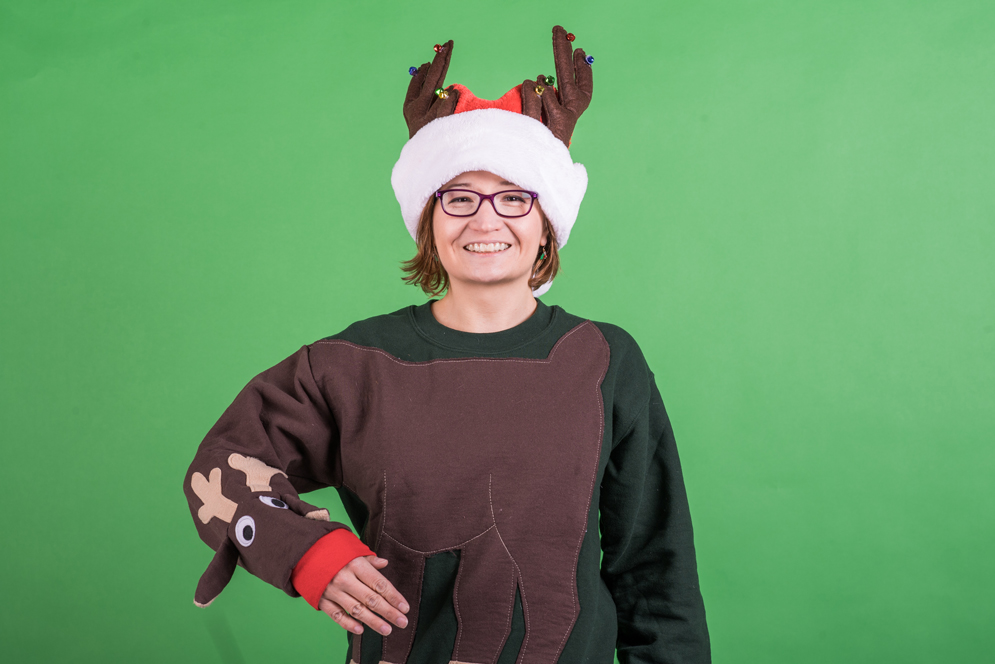 Karen Guendel, a CGS lecturer in rhetoric, bought this handmade sweater on Etsy for $35. “I just liked it,” she says. Photo by Jackie Ricciardi 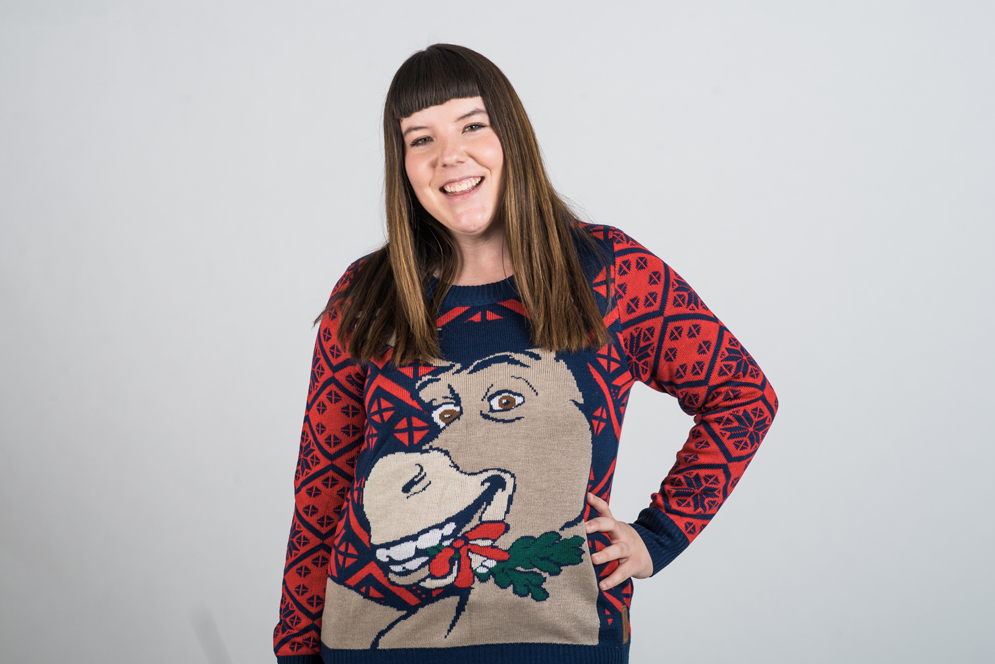 Laura LaBrecque (CAS’18) chose this Shrek-inspired sweater from Tipsy Elves with her contest partner, Kat Cornetta, because she loved the movie growing up—can you guess who her favorite character was? Photo by Jackie Ricciardi 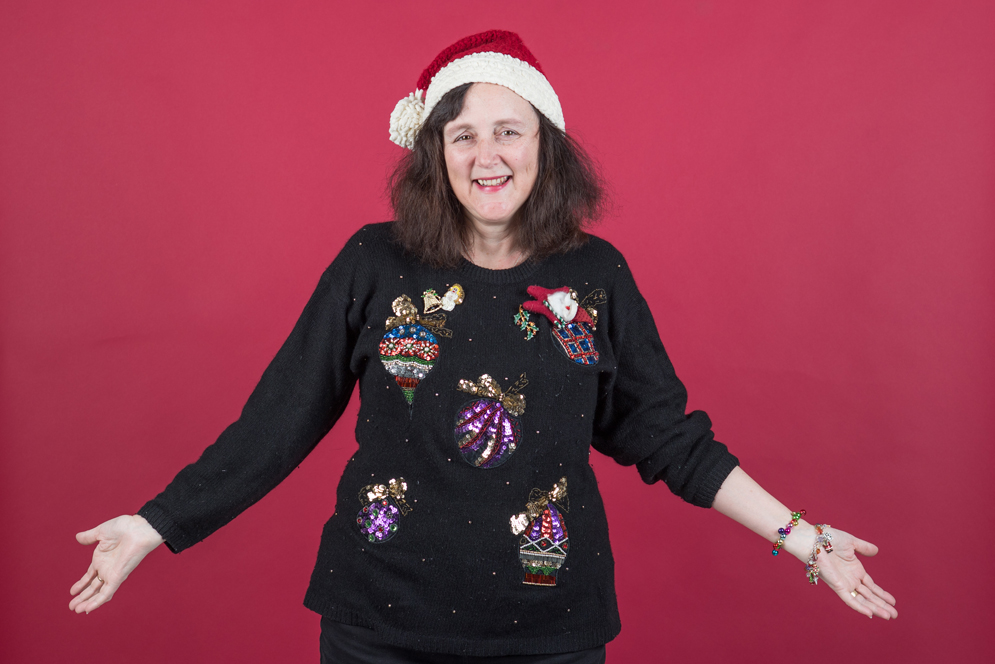 Regina Hansen, a CGS master lecturer in rhetoric, says her ugly sweater is vintage—about 25 years old. “It is one of many Christmas clothing items I have received on my December 13 birthday over the years. My aunt gave it to me and it was probably pretty expensive and hard to find at the time, because it was before the trend started. I have added some of my many Christmas pins to it for the complete December birthday effect.” Photo by Cydney Scott 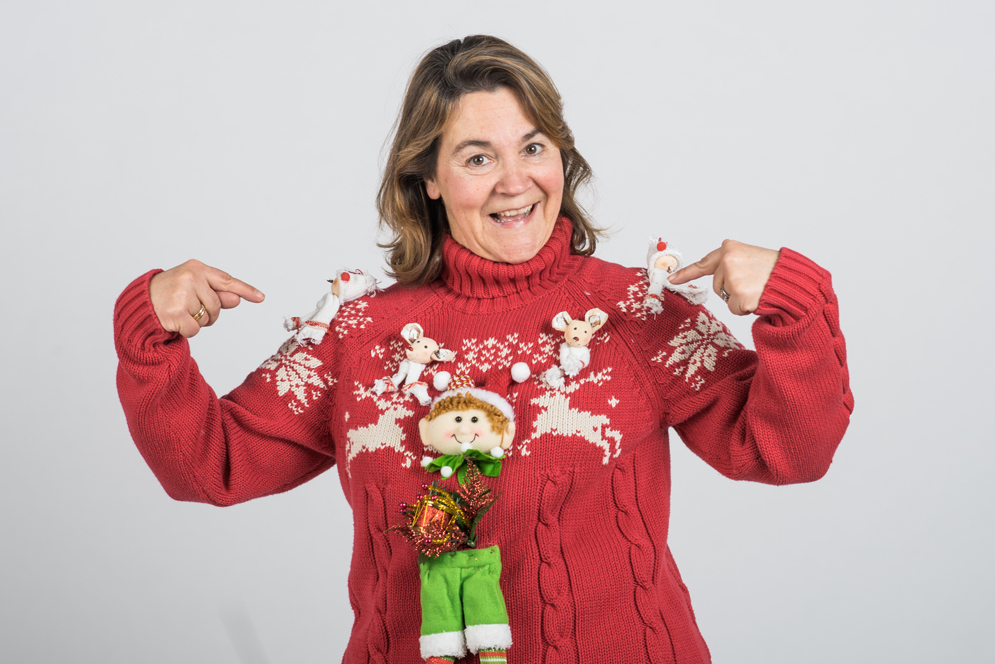 Neus Codina, MET International director, bought her sweater at a thrift store for $3.99 and sewed on all of the extras herself, bringing the cost to about $20. Photo by Jackie Ricciardi 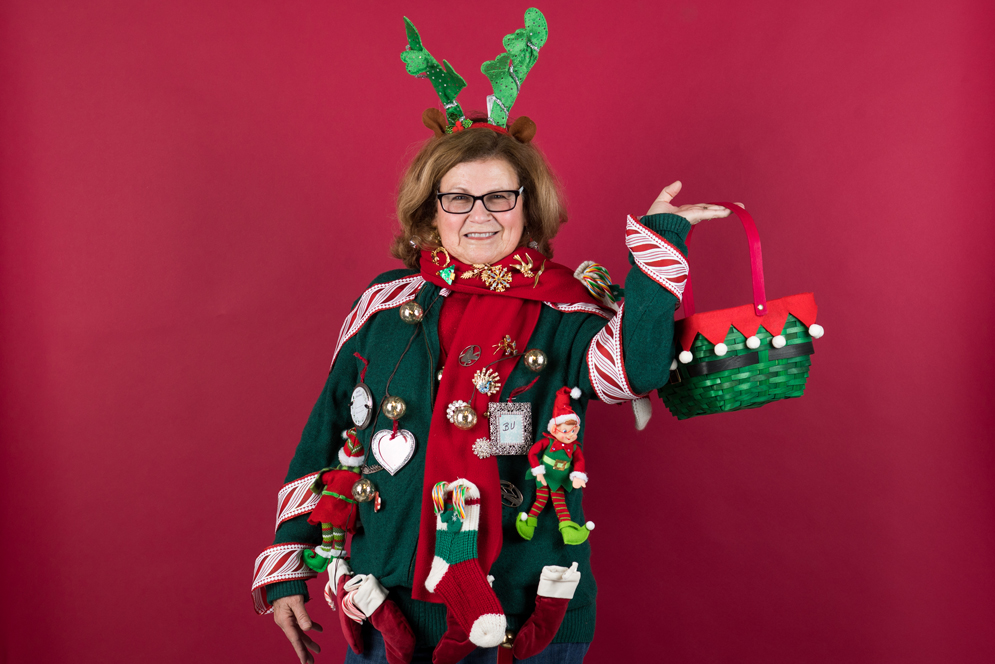 Rayhme Cleary, a CGS administrative assistant, calls her sweater the Jingle Elf. She took a green sweater from her husband’s closet and spruced it up with household decorations. “I always wear scarfs so I had to add one,” she says. Most of the pins she’s wearing date from the 1940s and were given to her by her favorite aunt. Photo by Cydney Scott 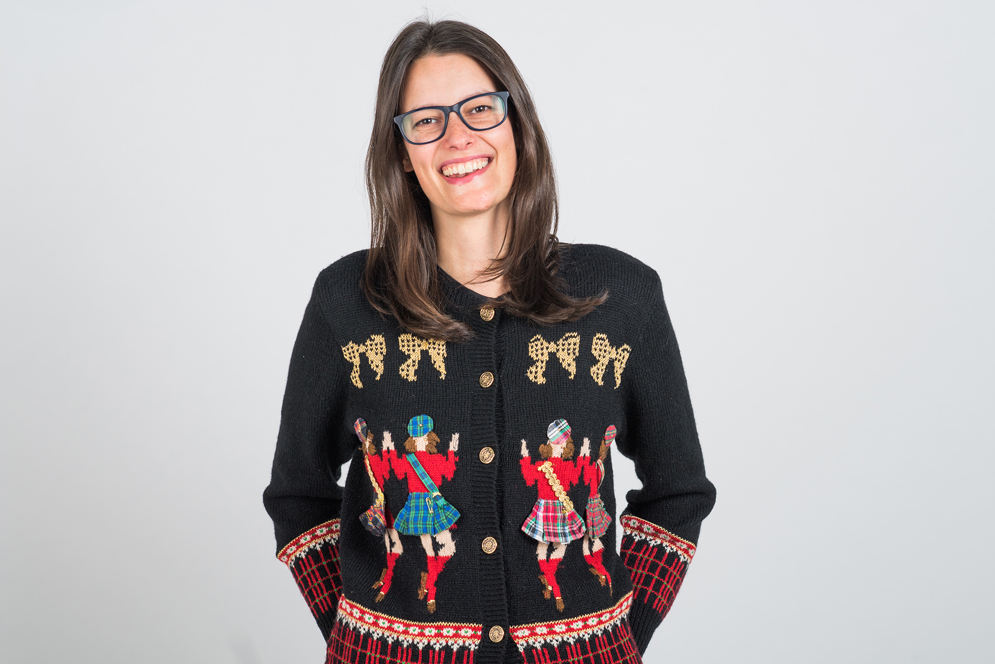 Sarah Voorhees, a SARP health and prevention educator, says she found this holiday sweater in a pile of her mother’s old clothes and liked it because it reminded her of her youth when she was an Irish stepdancer. Photo by Jackie Ricciardi 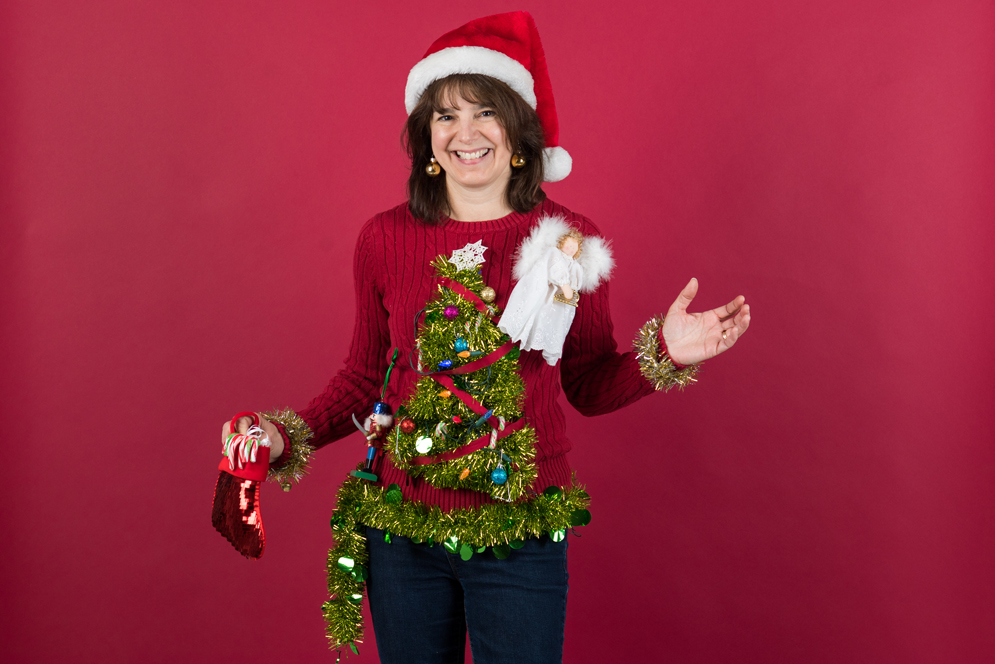 Donna Connor, Center for Interdisciplinary Teaching & Learning administrative coordinator, is indebted to her daughter, Megan Connor (SED’18), for her ugly sweater. She says the sweater “is upcycled from Megan’s ugly sweater and adorned with recycled ornaments from home and the office. I call it ‘Rockin around the Christmas Tree.’” Photo by Cydney Scott

Don We Now Our Ugly Holiday Sweaters
4
share this