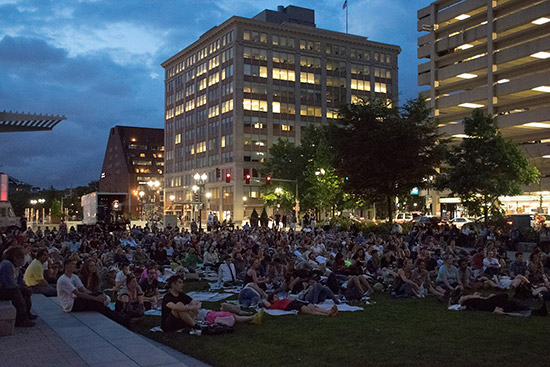 The Coolidge at the Greenway summer outdoor film series returns tonight with a sunset screening of the 1996 Hollywood blockbuster Twister, starring Helen Hunt and Bill Paxton. Photo by A. Gallagher Dixon

There’s something irresistible about watching a cinema classic on a big screen under the stars. Tonight, you can do just that when Brookline’s Coolidge Corner Theatre partners with the Rose Fitzgerald Kennedy Greenway Conservancy to present the third annual Coolidge at the Greenway, a series of free outdoor screenings of Hollywood classics at the Greenway Wharf District Park.

The film, which begins at sunset, is the 1996 blockbuster Twister, about two scientists, played by Oscar winner Helen Hunt and the late Bill Paxton, who lead a group of dedicated storm chasers across Oklahoma during a deadly tornado outbreak. The team is trying to perfect a data-gathering device that could lead to a new and improved tornado warning system as they battle one menacing storm after another. Twister also features Phillip Seymour Hoffman in one of his first film roles, as Dusty, one of the inveterate storm chasers. When it was released 21 years ago, the New York Times called Twister “a gale-force movie with energy to blow audiences right out of the theater.” It was nominated for two Oscars and became the second highest grossing film of 1996 domestically, with ticket sales of more than $494 million.

Also being shown in this year’s Coolidge at the Greenway series are 1985’s megahit Back to the Future, starring Michael J. Fox as teenager Marty McFly, who is sent 30 years into the past via a time-traveling automobile invented by his friend Doc Brown (Christopher Lloyd), set to screen Tuesday, July 18, and the original King Kong, which introduced moviegoers to the world’s most infamous giant gorilla in 1933, being shown Tuesday, August 8. All films are screened from 35 mm prints.

So grab a folding chair or blanket, hop on the T, and sit back and enjoy a classic movie outdoors. It’s a great way to spend a summer evening.

Twister, the first installment in the 2017 Coolidge at the Greenway series, is tonight, Tuesday, June 27, at the Greenway’s Wharf District Park, between Milk and India streets near Faneuil Hall, at sunset. Find a list of dates and times and directions here. Start times will change, as sunsets occur earlier each week. Rain date for Twister is Wednesday, June 28, for Back to the Future July 19, and for King Kong August 9. The screenings are free and open to the public.

Kyler Sumter can be reached at kssumter@bu.edu.